My guess is that not many people reading this ate flampoyntes for their Christmas dinner. This pork and cheese pie, commonly enjoyed during the medieval yuletide, combines those ingredients with sugar, ginger and cinnamon. No thanks, you might say. But why not? Why do some combinations of flavours strike us as appealing and others as peculiar?

We seem to be rather conservative about this. From the astronomical number of possible mixtures of ingredients (a conservative estimate is 1015 for an average eight ingredients per dish), we select just a million or so worldwide. Admittedly, there’s probably not enough time to cook up even a fraction of those options. But what makes us instinctively wary of such innovations as the ’liver in lager’ offered by Timothy Spall’s eccentric cook Aubrey in Mike Leigh’s film Life is Sweet? 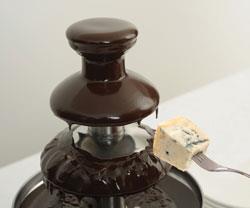 Unappetising? Perhaps, but it may taste better than you’d think

This is a question explored by Albert-Laszlo Barabasi of Northeastern University in Boston, US, and his colleagues in a recent paper. 1 Barabasi is widely known for his work on the topology of networks, ranging from the internet to the metabolic pathways of microorganisms. He and his colleagues have shown that many networks that grow and evolve spontaneously, whether in technology (computer systems), society (friendships) or biology (genetic or ecological networks), have topological features in common. In particular, they tend to be ’small-world’ networks with many shortcuts between nodes, and have power-law distributions of connectivity: the number of nodes with k links decreases in proportion to k- a, where  a is a constant. Or, very simply, many nodes will have only a few links and only a few nodes will have many links; the highly-connected ’hubs’ providing most of the shortcuts between remote nodes. Such networks are said to be scale-free: there is no well-defined average connectivity, unlike the case of a regular grid. They are also resilient in the face of random removal of nodes or links: the network remains well connected even if a high proportion of the links are cut.

What has all this to do with cooking? Barabasi and his team have now analysed the flavour network of cooking ingredients. If the same flavour compound appears in two ingredients - trimethylamine in white chocolate and caviar, say - they share a link in the network. The researchers have looked at the network’s patterns to see if there are general principles of flavouring that shape the world’s recipes.

Some food scientists - and chefs too - suspect that ingredients that share flavour compounds will taste better together than those that do not. It’s obvious enough that two different meats are likely to have some overlap in their flavour chemical profiles, but there are many less obvious pairings too: chocolate and blue cheese share at least 73 flavour compounds, and are combined by some daring chefs in cakes and truffles. Do our recipes reflect this concept more generally? In other words, the researchers ask, ’Do we more frequently use ingredient pairs that are strongly linked [that is, with many shared flavour compounds] in the flavour network, or do we avoid them?’

So why this striking difference between what Americans and East Asians consider to be good combinations? Given that flavour is only one consideration in the choices, perhaps some divergence is to be expected as different cultures find different criteria to be paramount: cost and availability, nutritional value, texture, ’structural’ roles such as binders and thickeners and so on. But it’s not that flavour is apparently a less important issue in East Asia - rather, flavour choice seems to be a matter of active avoidance of similarity, creating contrast rather than congruence. It’s tempting, though no doubt dangerously glib, to read more general cultural metaphors into this (besides, aren’t North Americans supposed to be individualist rather than collectivist?).

Perhaps it would be helpful to know how these different palates have evolved - whether, say, the medieval combinations that strike us as odd today also show flavour-pairing (or, in East Asia, its absence). Now, anyone for a flampoyntes?’