Three chemists have resurrected the art of science debate by publishing their conversations on the nature of bonds. This is science that makes you smile, says Philip Ball

Three chemists have resurrected the art of science debate by publishing their conversations on the nature of bonds. This is science that makes you smile, says Philip Ball

I have just finished editing a project to collect around 800 of the most significant papers from Nature  since it began in 1869 for publication in ten (dual-language) volumes in China. Among the many fascinations of this exhausting task was to watch the character of scientific discourse change during that time. It’s thrilling to see debates unfold through exchanges of letters, often in successive weeks, by the likes of Lord Rayleigh and Thomas Huxley. The speed of the discourse was not noticeably slowed by the absence of email or fax. And neither was the temperature of the arguments any lower than it can be today, although fierce accusations and contemptuous rebuttals tended to be more elegantly clothed.

Here, for example, is Huxley slugging it out with H Charlton Bastian, one of the last defenders of spontaneous generation, in 1870:

Huxley:’I am credibly informed that there are persons upon whom Dr Bastian’s really wonderful effluence of words weighs as much as if it were charged with solid statements and accurate reasonings; and I am further told that it is my duty to the public to state why such distinguished special pleading makes not the least impression on my mind. When, because I have preserved a silence, which was the best kindness I could show to Dr Bastian, he presumes to accuse me publicly of unfairness, and to tell your readers that my Address [to the BA] "is calculated to mislead" them, I have no alternative left but to give them the means of judging of the competency of my assailant.’

Bastian:’Let me tell Prof Huxley that I repudiate such "kindness", as any honest man would who is simply seeking after truth, and relegate it to the same regions as I would that indescribable air of restrained omniscience whereby he endeavours to crush arguments and facts, to which he altogether fails to reply.’ 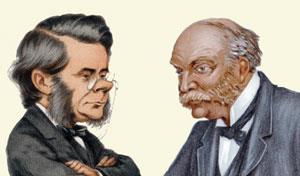 Some might consider it a mercy that this sort of wrangling rarely now leaks out into the public sphere. But I’m not so sure that it isn’t, on the contrary, a shame. Undoubtedly there is a degree of posturing going on (this is Huxley, remember), but how refreshing it is in some ways to see the cut-and-thrust of the scientific process, rather than the cut-and-dry narratives that generally appear in published papers. We all know that ideas and experiments rarely, if ever, develop as smoothly as those papers imply, and even the disputes that occasionally flare up in journal ’comments’ pages tend to preserve this facade.

If the alternative were mere hostile jibes and name-calling, there would be little to be gained from a gloves-off approach. But that’s not the only option, as a recent paper indicates.1 It is a debate between Santiago Alvarez of the University of Barcelona, Spain, Roald Hoffmann of Cornell University, US, and Carlo Mealli of the Institute of the Chemistry of Organometallic Compounds in Florence, Italy. As they put it, ’three colleagues and friends who have strong opinions on a specific bonding problem, the presence or absence of a cross-ring sulfur-sulfur bond in the trinuclear Cu3S2 cluster’. The authors argue that the matter bears on the more general question of the chemical bond per se  . It is, however, more in the nature of the presentation than in the subject matter that this paper acquires its interest. It shows that experts can disagree - strongly - without rancour, and that airing the disagreement can help others to think about the issues. ’Much of what transpired in our exchange finds no place in the scientific literature, or is dealt out of it,’ the authors say. ’And yet it is an essential part of the way science is done.’ The debate arose when a PhD project under Hoffmann on metal-sulfur clusters led to collaboration with Mealli, and then to a joint paper which was sent to Alvarez to review. He declined because of a fundamental difference of opinion about the interpretation - but he explained this position to Hoffmann, and the exchange began.

It is a long one, and I won’t even attempt to summarise it except to say that it pertains to the very general, important question of when a bond is a bond, as opposed to a mere proximity of atoms. Of course, this is a notoriously contentious matter, hinging on how one decides conceptually to ’carve up’ electronic structure. As the authors all conclude, ’Perhaps the lesson is not that people disagree but that the chemical bond is not simple’. That alone seems important to say to a world in which textbooks may promote a complacent false confidence.

If all scientific disputes were picked apart at this length, the literature would be even more gargantuan. But, especially with new electronic resources, there is surely room for a bit more of it. And one other thing: the paper makes you smile. How often can you say that?