To understand the chemical choreography of the cell, we must acknowledge the bustling biomolecular ballroom in which it takes place, says Philip Ball

To understand the chemical choreography of the cell, we must acknowledge the bustling biomolecular ballroom in which it takes place, says Philip Ball

It’s one of the peculiarities of the molecular dance of cell biology that we can get so far in understanding it by assuming that, aside from the waltzing couple of receptor and ligand, the ballroom is empty. It’s under those conditions that the speed at which the partners find one another and their affinity for each other are typically measured. But as Roald Hoffmann has said: ’It’s a wild dance floor there at the molecular level’ - and not just agitated, but crowded. In a typical prokaryotic cell, biological macromolecules occupy around 20-30% of the available volume. 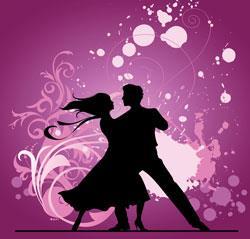 The consequences of this molecular crowding have become a hot topic in cell biology. The folding of proteins, for example, can be altered by crowded conditions in ways that are both advantageous and detrimental. Hemming in an unfolded protein can speed up its folding, but if the crowding is too great it may instead encourage a denatured protein to aggregate into an amorphous, non-functional form.1  It seems likely that a major role of the molecular chaperones involved in protein folding is combating this negative effect of crowding.2

As for the binding of one molecule to another, crowding has two key consequences. The first returns us to the dance analogy: in a crowded room, two partners take longer to find one another since their progress is impeded. In other words, diffusion is slower inside a cell than in dilute solution. But once they have come together, they are more likely to stay together. Here the analogy becomes shaky: it’s not that the crowd physically prevents them from parting, but rather, there’s an entropic effect owing to the fact that their volume is smaller in the associated state.

There’s a third factor too. Molecular biology famously ensures that each dancer finds the right partner via selective molecular recognition. But in fact, mispairings occur all the time: proteins often bind loosely to one another and to DNA in a non-specific manner. Crowding makes such non-specific associations more common.

It’s not easy to figure out what the consequences of these effects will be for cell processes such as protein-protein interactions or gene regulation. One might anticipate that crowding just amounts to a ’rescaling’ of molecular behaviours - the diffusion constants are a bit smaller, and the binding constants a bit bigger. It doesn’t follow, however, that the biological consequences are linear. Many cell processes are governed by complex networks of gene interactions. One gene might express a protein that regulates another gene and this introduces feedback that may make the result of crowding impossible to deduce.

Pieter Rein ten Wolde of the FOM Institute for Atomic and Molecular Physics in Amsterdam, the Netherlands, and his coworkers have now explored how molecular crowding can alter the operation of gene networks.3 They figured that the kind of simple renormalisation just mentioned could offer a general picture of the outcomes without the need for prohibitively intensive computer simulations. They fed these assumptions into reaction schemes for some model gene networks.

The simplest case they considered was the expression of a constitutive gene -one that is transcribed continuously. Here, an RNA polymerase binds to the promoter region of the gene, catalyses the formation of mRNA, and then detaches and the mRNA is translated into protein. Such genes are often regulated by a repressor protein, which may bind to the promoter and inhibit mRNA formation. In that case, the researchers found that the effect of crowding was non-monotonic: at first it enhances protein expression by increasing the binding of the RNA polymerase, but at higher crowding, repressor binding becomes more effective and expression falls.

The full complexity of the issue becomes apparent in a more complicated network: Ten Wolde and colleagues chose the genetic switch of the virus bacteriophage? l that prompts the host cell’s DNA to produce copies of the virus. Their model reaction scheme here involves 194 reactions, and it’s not easy to summarise how crowding manifests itself; the stability of the switch’s two states and the rate of switching are both affected by crowding, and the latter, again, in a non-monotonic fashion. In any event, the effects are significant, and they imply that there may well be few, if any, molecular processes in the cell that can be properly understood, let alone predicted, without taking into account what a busy ballroom it is.