The ability to understand molecular structure is perhaps both our greatest skill and largest encumbrance as scientists. A quick glance at the structure of a target such as nanolobatolide tells us much about its connectivity and the manner in which it might react, but may also delude us into thinking we know its shape. The remarkable ring system and complex stereochemistry are too easily noted by pen (or mouse) - while the truth is that without complex computational algorithms, we’re really just guessing. However, computational prescience is still impractical - and would take part of the fun out of synthesis, right?

The complex and highly decorated ring system of nanolobatolide, isolated in 2009 from the coral Sinularia nanolobata, 1 is probably reason enough for the majority of synthetic chemists to embark on the synthesis. But promising biological activity relating to neurodegenerative conditions such as Parkinson’s and Alzheimer’s diseases provides a handy additional rationale.

Such a worthy target has no doubt attracted many research groups, but it is David Chen of the Agency for Science, Technology and Research in Singapore who takes the prize for completing it first.2 However, this victory would be in vain had the synthesis not been both concise and impressive.

Chen’s team started their synthesis with another, rather more common natural product. The terpene menthone not only contains an isopropyl group found in the target, but establishes useful asymmetry from the off. Expanding the ring via a short-lived cyclopropane to quickly formed a seven-membered ring enone.

Enolisation and trapping provided an enol triflate - a great handle for organometallic coupling reactions. Using an atmosphere of carbon monoxide, the team did a rather neat carbonylative Stille coupling to insert a carbonyl and bolt on a vinyl group (figure 1). Treatment of this somewhat sensitive-looking triene system with a little Lewis acid (scandium triflate) promoted a Nazarov cyclisation - completing the cyclopentenone in only three steps.3 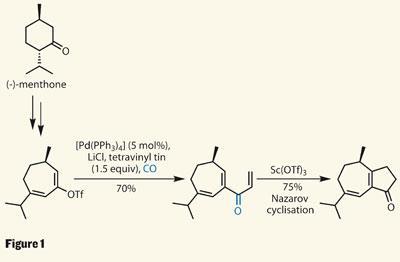 With the first five-membered ring installed, the team’s plan was to install the second in quick succession. Inspired by biomimetic principles, they hoped to exploit a Diels-Alder cycloaddition of ethyl acrylate - by converting the cyclopentenone to a diene. Adding methyllithium alkylated the ketone, providing an alcohol which they planned to dehydrate - something they found more difficult than expected. Worse still, the triene product was more than a little capricious. However, the solution was neater than they could have hoped for - simply generate the diene in the presence of the dienophile, using the same Lewis acid to promote both the dehydration and the cycloaddition (figure 2).

Moving into the latter stages of the synthesis, the group had a right to be concerned over the oxygenation and installation of the

-lactone, as a previous attempt came unstuck at a similar point. On paper, the strategy looked sound, but in the round-bottomed flask the complex ring system held the functional groups in an unfavourable geometry. Their concern must have multiplied when even a simple hydrolysis of the ethyl ester was distinctly problematic - they had to resort to reducing the ester, then oxidising it back to the carboxylic acid. However, fortune sometimes favours the brave, as they were surprised to find the target as the major product of the oxidation process.

The group suppose that under the strongly oxidising conditions, an epoxide was produced as an intermediate, followed by intramolecular epoxide opening and lactonisation. This is perhaps a fitting end to a great piece of strategic synthesis - 12 steps to such complexity is quite an achievement, even if it did turn out to be the opposite configuration to the natural material.