Perhaps the most frustrating part of being a synthetic chemist is the jealousy with which we must regard nature. Take the case of resveratrol, a simple natural product that is entirely flat - but which nature can dimerise, bend, and break into a whole family of complex structures.1 This example actually has some important implications, as resveratrol is proposed to be the source of red wine’s therapeutic properties. Further, its oligomeric family members have an extraordinary portfolio of biological effects - and these two recently isolated targets are no different. 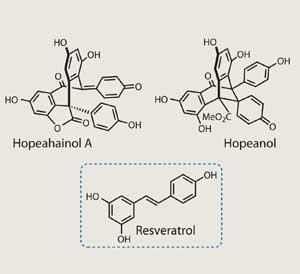 Let me introduce hopeahainol A and hopeanol, a pair of dimeric natural products isolated from Dipterocarpaceae rainforest trees that are as close in structure as they are in name.2 Their bioactivity is diverse - the former inhibits acetylcholinesterase (an enzyme implicated in Alzheimer’s disease), whereas the latter shows tumour cell-line busting cytotoxicity. Although they were identified only a few years ago, this proved to be no barrier for total synthesis’s most prolific - and perhaps most numerous - synthetic group, that of K C Nicolaou. Working in his recently established labs at the A*Star institute in Singapore, along with David Chen, the team have completed an impressive, biosynthetically inspired synthesis of both natural products.3

With a couple of relatively mundane coupling reactions, the team completed the (almost) flat precursor they needed by coupling together two resveratrol-derived starting molecules, forming a single unresolved stereocentre (figure 1 - one resveratrol moiety shown in blue, leaving the other self-evident). The exact orientation of that hydroxyl group is essentially irrelevant, as treatment with para  -toluene sulfonic acid promotes elimination, and then a Friedel-Crafts-type alkylation, to construct a delta-lactone, and more importantly to install a rather hindered quaternary carbon centre. Adding a bit of base then prompted this six-membered heterocycle to open, which when quenched with acid re-lactonised as a five member ring.

With only five steps completed, the initial goal of hopeahainol A is already tantalisingly close - only one more carbon-carbon bond formation still to go. To that end, after protecting the remaining phenol, the group installed the necessary synthetic handle by epoxidising the trans  -alkene. This reaction was unfortunately unselective, with either face of the alkene apparently equally desirable, but the team proceeded with the mixture. This substrate then underwent a second, and rather impressive, intramolecular alkylation at the desired position of the epoxide (figure 2). Looking a little deeper, it’s interesting to see that the diastereomeric ratio has increased in the team’s favour during this reaction, an unexpected benefit for the group. This outcome can be explained by considering that the two diastereomeric epoxides could react at different rates, and that their desired product is the kinetic product - the faster forming.

Three further transformations took the group to hopeahainol - the first of those, an interesting oxidation using hypervalent iodine (2-iodoxybenzoic acid in this case) that not only converts the free alcohol into a ketone, but also selectively converts one of the para  -methoxyphenol groups into the required keto quinoid. Not remarkable, but new to me at least. More typical methods were used to remove the rest of the methyl and acetate ’protecting groups’ to give hopeahainol A. 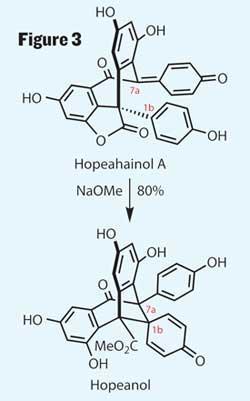 Neat work, but it wasn’t time for a celebratory pint just yet. The biosynthetic origins of hopeahainol A suggest that it is derived from hopeanol, a fact the group hoped to reverse to access the second natural product. And a spot of base did just that, providing two natural products for the price of one (figure 3). Nicolaou suggests an interesting mechanism for this transformation, as the carbon-carbon bond formed when closing the cyclohexanone is quite constrained. He believes that opening of the gamma-lactone is essential, as it may be holding carbon atoms 7a and 1b apart.

It’s a shame there isn’t space to discuss these reactions in more detail, but it would be all too easy to transcribe the entire paper. Nature sets the synthetic bar rather high, and it’s nice to see valiant attempts to impersonate it.