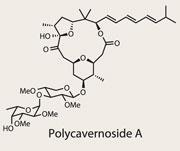 When one attempts the first synthesis of a natural product, the set of challenges are often unknown; which intermediates are either inaccessible or unstable, for instance. However, when approaching a target with a significant synthetic history, the challenges morph, with the most important being chemical novelty. Polycavernoside A is in the latter camp, with existing syntheses by Ohio State University’s Leo Paquette,1 and James White from Oregon State University,2 leaving quite a challenge for Eun Lee of Seoul National University, Korea.3 Prime in his toolkit for this synthesis was a Prins cyclisation, which he hoped would close the macrocyclic ring, form a tetrahydropyran and impart chemical complexity in a single reaction. This would certainly appear more efficient than prior approaches, in which a Yamaguchi lactonisation was the preferred ring-stitcher.

Of course, the team had to get to the pre-cyclisation intermediate first - no small task. As is typical for this class of natural product, splitting it down into bite-sized fragments was quite possible, and allowed Lee to demonstrate some neat asymmetric transformations. First was an interesting synthesis of a chiral secondary alcohol using the Nokami alcohol. This chiral reagent, easily produced from menthol, allowed access to a homo-allylic alcohol under remarkably mild conditions - so mild that a primary tosylate (OTs, a very good leaving group) was left unmolested (figure 1).

This reaction proceeds through a cyclic transition state, in which a crotyl group (-CH2CH=CHMe) is transferred from the Nokami alcohol to the target aldehyde with very high enantioselectivity,4 requiring only a little acid to encourage reaction.

This fragment was elaborated by treating the  a -hydroxy tosylate with a little base to form an epoxide, which was immediately opened by addition of a lithiated alkyne. Further coupling steps (in the form of an alkylation and an esterification) completed the pre-Prins product.

With the required hydroxyl groups suitably prepared, treatment of the hydroxyacetal with triethylsilyl trifluoromethanesulfonate (TESOTf) in acetic acid, in the presence of trimethylsilyl acetate (TMSOAc), resulted in an excellent yield of the desired tetrahydropyran, building the ring with high diastereoselectivity. Key to this was the realisation that the neopentyl secondary alcohol did not need protection - its hindered nature was sufficient to prevent its interference with the Prins reaction. Their reward for using this novel approach (and exotic cocktail of reagents) was the chemical complexity resulting from the reaction -two rings and three new stereocentres are installed in the course of the cyclisation, and the product is perfectly set for the subsequent chemistry (figure 2). 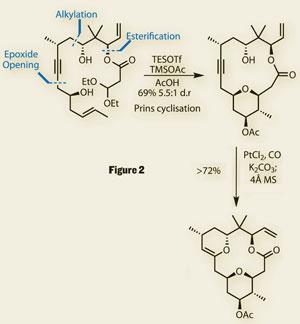 The next transformation is almost as impressive; the hindered alcohol was persuaded to form a further dihydropyran ring using only a little platinum chloride catalyst and base. The enol ether functionality in this pyran is electronically different to the other alkene moiety in this intermediate, and thus reacts selectively under epoxidation-oxidation conditions. Further oxidation (in the form of ozonolysis) targeted the remaining terminal alkene, producing an aldehyde. In the next reaction, this was treated with iodoform and chromium chloride to perform a Takai olefination, creating a vinyl iodide handle for a later coupling reaction. However, under the reaction conditions, a fortuitous rearrangement occurred, converting the six-membered dihydropyranone to a five-membered-ring hemiacetal, as required in the target (figure 3). At this stage, the synthesis had converged with previous work, and thus represented a formal total synthesis, but the group replicated the earlier work for their full satisfaction. The vinyl iodide was coupled using a Stille coupling to provide the triene system, while deprotection and glyocosidation of the remaining alcohol completed the chemistry in a rather compact 22 steps.