In the search for new biologically active natural products, sometimes a team isolating a new compound family will be lucky enough to find one active member. But occasionally, an entire family is found with potent activity - presumably quite an occasion for these isolation groups. One such class of compounds is the tetrahydroisoquinolines, a large family with many potent members, some of which are currently in clinical trials. Their biological profile is quite exciting, with both antitumour and antibiotic effects. However, as is often the case when using natural products as drugs, a spot of structural fine-tuning is needed to optimise the compound, and total synthesis is a key tool for developing these analogues. 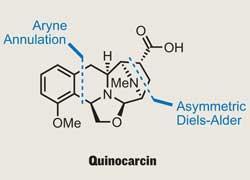 Quinocarcin’s potent nature has attracted several syntheses, including those by Fukuyama1 and Garner,2 but the latest work, by Caltech’s Brian Stoltz, constitutes the shortest route to this compact yet complex target.3 Key to establishing asymmetry, while making a rapid start on the complex polycycle that forms the molecule’s right hand portion, was the judicious choice of an asymmetric Diels-Alder cycloaddition (figure 1). Using the ever-popular Oppolzer’s sultam (the only sultam I’ve ever used), Stoltz made the bridged caprolactam in just one step, creating three new stereocentres with excellent control. The Diels-Alder reaction may be 80 years old, but it’s still looking rather fit and healthy. 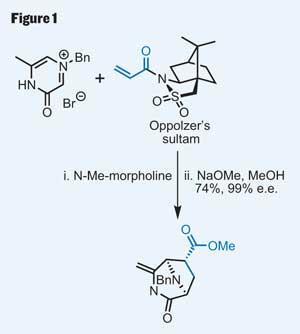 Having constructed the [3.2.1] bicycle found in the natural product exactly, Stolz’s next move was to break it apart. As counterintuitive as this might be, the team had to open the medium ring to establish the ’synthetic handle’ needed to connect the left hand ring, later in the synthesis. Breaking apart an amide is pretty easy, but selectivity issues befell them in this case, as either the lactam or amide could undergo the methanolysis. After an extensive screening of the nether regions of the periodic table, and a bit of luck, Stoltz discovered he could get a decent yield of the desired product using yttrium triflate as an additive (figure 2). Unfortunately, there’s no rationale given to explain this selectivity, but it’s still a nice outcome. 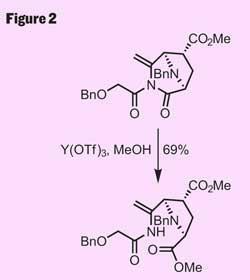 This left the team with the N  -acyl enamine required to perform yet another historical cycloaddition reaction, this time using a benzyne. To the inexperienced, the exotic benzyne looks so strained it’s almost perverse, but such species are actually quite commonly used to build complex aromatic systems. Adding a more modern twist to this chemistry, Stoltz used these reactive substances in a rather different way, deploying them in a second Diels-Alder type reaction to build the isoquinoline core found in the natural product.

To generate his benzyne-type intermediate, Stoltz first reacted the stable starting material with TBAT (tetra-n  -butylammonium difluorotriphenylsilicate), a source of fluoride that causes the silyl triflate to eliminate. The resulting aryne then reacts with the N  -acyl enamine to form a dihydroisoquinolinol, which rapidly dehydrates to give the desired aromatic product (figure 3). It’s worth examining the regioselectivity in this reaction, where it seems that the majority of the aryne reacted in the correct ’orientation’. In this case, the selectivity probably results from favourable electronic effects in the cyclisation, but Stoltz doesn’t discuss this any further (and it’s been a while since I read up on frontier molecular orbitals). 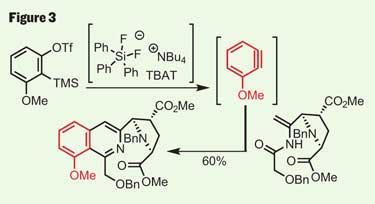 Reforming the medium ring was completed subsequent to a stepwise reduction of the pyridine moiety, using substrate control to install two further stereocentres with impressive ease. It’s also worth pointing out that the reductive steps used in this synthesis are part of a growing trend in modern organic chemistry, with researchers trying to minimise cyclic oxidation / reduction. The optimal scenario is one in which no reduction or oxidation (redox) is required, meaning that the starting materials and target are at the same oxidation state. However, as this is rarely possible in practice, the next-best synthetic strategy (termed ’redox economy’) is to use only oxidation or only reduction; a recent example of this approach can be seen in work by Phil Baran of Scripps.4 This synthesis also demonstrates thought-provoking modern twists on long-established reactions, building a complex target in only eleven steps.