Richard Catlow, former director of research at the Royal Institution, tells us why it's important to remember the key role the RI has played throughout the history of science

Richard Catlow, former director of research at the Royal Institution, tells us why it’s important to remember the key role the RI has played throughout the history of science

During its long, distinguished and sometimes turbulent history, the Royal Institution (RI) has often been in the news. It has been so again recently with news of the departure of Susan Greenfield as director; but perhaps we should step back from the headlines and consider the purpose and role of the RI itself - an institution that has been so important, both in the scientific life of the UK and in the development of chemistry.

Let us first go back to its origins: the RI was founded in 1799 in the Soho Square, London, house of Sir Joseph Banks with a mission to diffuse ’the knowledge, and facilitating the general introduction, of useful mechanical inventions and improvements; and for teaching, by courses of philosophical lectures and experiments, the application of science to the common purposes of life’. The vision of the founders is clear: they wanted to promote both the development - and the impact - of scientific knowledge.

And to what enormous effect has this vision been realised during the last 211 years. The institution rose to fame under the flamboyant Humphry Davy, who, as director of the laboratory, made key early discoveries in electrochemistry, enabling him to isolate nine new chemical elements. He recruited an able young laboratory assistant, Michael Faraday, who soon eclipsed Davy and whose science transformed the way we live. Working in his basement laboratory, Faraday’s career was a constant stream of creative innovation, including the discovery of electromagnetic induction - the basis of the modern power industry - the principle of the electric motor and the electromagnetic nature of light. His successor John Tyndall’s work on infrared radiation laid the foundations for our understanding of the absorption of this radiation by molecules - the process at the heart of global warming; and towards the end of the 19th century, James Dewar pioneered the science of cryogenics while working at the RI.

The tradition of scientific excellence continued in the last century: the father and son team of William and Lawrence Bragg founded the science of crystallography, which has revealed the structure of matter at the atomic level and led to the development of molecular biology. George Porter and David Phillips made groundbreaking discoveries in spectroscopy, photochemistry and the applications of laser light in cancer therapy. 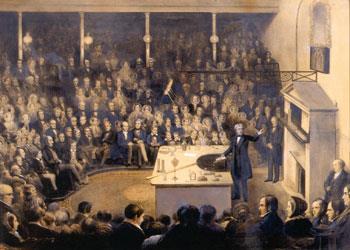 During the past 20 years, under the leadership of John Meurig Thomas, Peter Day and subsequently myself, the science of the RI focused on the chemistry and physics of materials, with discoveries in catalysis, molecular magnetism and the applications of advanced computational techniques to predicting the properties of materials. Currently, the scientific programme, led by Quentin Pankhurst, involves close collaboration with University College London and focuses on nanomagnetism and its applications in biomedicine, including tools and methods for treating cancer. His team’s work continues the 200 year unbroken tradition of scientific innovation, discovery and impact.

Scientific discovery is at the heart of the institution; but equally important is the RI’s promotion of the impact of science by its unique role in showing science to the world. It is perhaps most famous among the general public for its Christmas lectures for children, founded in 1825. It was my privilege for several years to organise and present in the RI’s schools’ lecture programme, established by Lawrence Bragg in 1954, and I will never forget the wonder shown by young children on seeing simple but powerful demonstrations of the basic science of gravity or electricity, and their excitement on seeing real chemistry in demonstrations of chemiluminescence in a darkened lecture theatre.

So what is the Royal Institution for? This question was asked by Bragg, when he took over the institution in 1954. It is, of course, a member organisation, but it is not a club. Nor do I believe it is about ’popularising science’ - a patronising and outdated notion. It is about creating science and demonstrating its impact on ’the common purposes of life’ - a role that is more important and relevant than ever.

Richard Catlow was Wolfson professor of natural philosophy at the Royal Institution from 1989 to 2007 and director of the Davy Faraday Research Laboratory from 1998 to 2007; he is currently professor of materials chemistry and dean of the faculty of mathematical and physical sciences at University College London.