A light to reveal the atomic order of the world 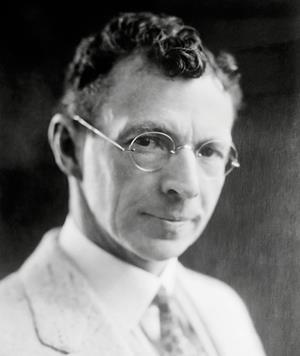 When I was a child, I would occasionally get my hands on an Archie comic; forbidden literature in our household – principally, I suspect, because it was too low brow. What I remember most about them were the ads at the back. There was onion gum, ‘electric shock’ hand buzzers and whoopee cushions – pranks reserved for droll and tedious uncles. But the x-ray specs, illustrated with the silhouette of a clothed young woman with a faint outline of her underwear – now there was something intriguing! If my rational self smelled some kind of rat, the thought of such a device was secretly thrilling: who would I want to look at first?

Indeed x-rays have captured the public imagination like almost no other physical phenomenon, for their ability to see into a hidden, perhaps naughty, world. Chemists today live and die by x-ray experiments, and if the solvers of crystal structures are remembered and lionised, generating the radiation in the first place was no mean feat. For the first 60 years of x-ray structures we must remember William Coolidge.

A farm boy from a small town in Massachusetts, his academic abilities were spotted early and he was encouraged to apply for a scholarship at Boston Tech (now Massachusetts Institute of Technology, MIT), then a modest institution hugely overshadowed by the prestigious Harvard College. He enrolled for a course in electrical engineering, but switched to chemistry and physics. His mentor, Willis Whitney, recommended a spell in Leipzig, Germany, with Paul Drude – one of the leading experts on optics and the interaction of light with matter. Although very short of money, Coolidge made the most of his time, learning German and travelling in Europe. When Wilhelm Röntgen (the discoverer of x-rays) visited the department in 1898, Coolidge’s discussion with the great man left a deep impression.

When Coolidge returned to MIT, it was as a physical chemist. But his future did not lie in academia. Whitney, now director of the General Electric (GE) research laboratory in Schenectady, invited him to join in 1905. The electricity grid was expanding fast and electric lights – based on Joseph Swann’s and Thomas Edison’s incandescent carbon whiskers – were turning night into day. In Germany, the Siemens and Auer companies were turning to longer-lasting tantalum and osmium threads. At GE, tungsten – the most refractory metal in the periodic table – was an obvious choice; but the metal was mysteriously brittle.

Coolidge set to work, and his solution was published in 1910. The method required careful purification and reduction, pressing, and sintering into an ingot. Mechanical working through a series of swages did the rest, and the wires were as strong as steel. It was only in the final paragraph that Coolidge revealed the colossal effort involved, paying tribute to the work of some ‘20 research chemists, with a large body of assistants’ and ‘the staff of the incandescent lamp factory’. The investment paid off handsomely. By 1911 the company was earning millions from their superior ‘Mazda’ bulbs. Ironically, the patent Coolidge filed was later rejected on the grounds that ductility, even in tungsten, wasn’t actually an invention.

GE’s lab must have been an exciting place, and in 1909 Coolidge was joined by Irving Langmuir. Langmuir was charged with understanding the behaviour of the hot metal filaments. By 1913, Langmuir, now working on electronic valves, made a breakthrough. Under the extreme vacuum produced by his own variant of Wolfgang Gaede’s new diffusion pump, Langmuir could generate an electron current using a hot thermionic filament as the cathode; the current depended only on the temperature of the filament and not the potential difference.

Coolidge saw an opportunity. Until that point, x-ray tubes used platinum targets bombarded by electrons produced in low pressure gas discharges. The radiation scattered everywhere, the accompanying stream of cations caused endless problems, and the tubes were notoriously flakey. Instead, Coolidge reasoned, under the extreme vacuum of Langmuir’s pump, the electrons emitted by a glowing tungsten wire, and focused by a molybdenum shield, could be slammed into a shaped tungsten target. The result was an x-ray source of remarkable brilliance and reliability, whose intensity and penetrating power could be controlled independently. The tubes are also beautiful objects; the one at the London Science Museum sports an Edison screw at the cathode end, a supremely practical fitting that reminds us of the discoverer of thermionic emission. 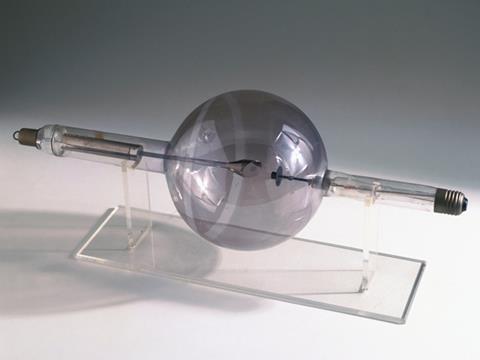 Coolidge tubes were brighter, more reliable and more practical than their predecessors

Coolidge’s timing could not have been better. His paper was printed in December 1913, barely a year after Lawrence Bragg’s interpretation of Max von Laue’s x-ray diffraction result. Although envisaged primarily for the burgeoning medical diagnostics and therapeutics market (lead shields were used by researchers, but radiation treatments were all the rage for the general public), the Coolidge tube would be picked up by crystallographers for whom, as it evolved, it became a workhorse steadily improved upon (such as with rotating anodes), until the advent of microfocus tubes. Synchrotrons are another story.

Ernest Rutherford once said that science was either physics or stamp collecting. Flipping through journals packed with x-ray structures, I sometimes wonder whether parts of the chemical literature don’t actually pander to the secret voyeur in us all.