The periodic table fizzles out at the bottom after about element 100. Atomic nuclei with more than around 100 protons are radioactively very unstable, no matter how many stabilising neutrons they contain. Many theorists dream of an ‘island of stability’, in which heavy enough nuclei might hold together. That island remains elusive and, even if it exists, it is above the mass regions that have been explored.

Efforts to explore the lower limits of the periodic table continue, of course; but I regard them as rather a feeble pastime. The main current trick for making a ‘superheavy’ element is to do it one atomic nucleus at a time, by firing two smaller nuclei at one another. Sometimes the pair stick briefly and short-lived nuclei of elements up to 118 have been made this way. Chemists have also tried extending the top of the periodic table by creating the zeroth element ‘neutronium’ with no electrons. That experiment has not worked. However, such trivial extensions of the periodic table have in my view already been vastly outflanked by astronomers. 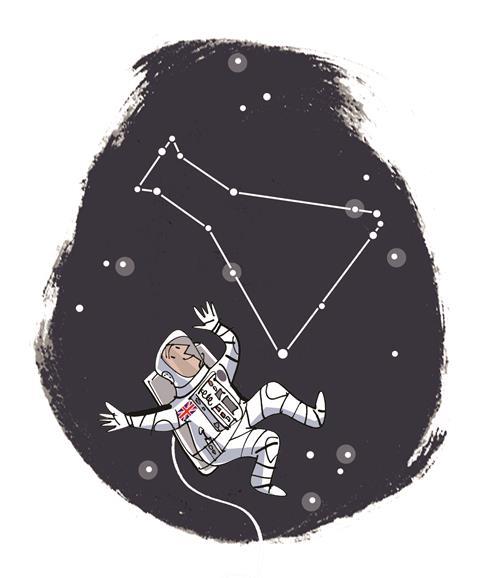 A neutron star is a sphere of about 1056 neutrons. The whole idea looks daft, because unbound neutrons are unstable; each decays into a proton and an electron with a half-life of about 12 minutes. Neutrons in an atomic nucleus are supposedly stabilised by the strong nuclear force and a neutron star is just a mass of neutrons, whose gravity holds them together.

Unlike our Sun, a typical neutron star is just a few kilometres across, and spins a few times a second. Even at the surface, it has a vast gravitational field; and neutrons inside will also feel a lot of pressure from the ones above. But imagine the neutrons on the surface. Unrestrained by the strong nuclear force, some of them may decay into a proton and an electron. Even if only 0.1% of the pulsar’s neutrons decay in this way, that makes 1053 decays! What will happen to all those electrons?

As a chemist, I like to imagine them circulating around a pulsar – a type of neutron star – rather as electrons do around an atomic nucleus. That would make the pulsar the huge atomic nucleus of a truly vast superheavy atom. It would hugely extend the periodic table. Furthermore, that new astronomical element will have chemistry!

What sort of chemistry should we look for? The obvious stuff for it to combine with is the interstellar gas around the star. This gas is mainly hydrogen with some helium, but contains other elements as well. When interstellar gas condenses into a star and planets, those planets often have a lot of heavy elements in them. The Earth, for example, is thought to have an iron-based core.

Accordingly, I reckon the chemistry of a neutron star should not just be that of a hydride, but should incorporate combinations with heavier atoms. The Earth’s crust has a lot of oxygen, silicon, aluminium and iron in it: so astronomers should look for these elements too. The obvious technique to use is infra-red spectroscopy, already well established in astronomy. Rather than scanning a neutron star for the infra-red bands corresponding to hydrogen stretches and bends, they should also look for the lower frequencies of those heavier atoms. The result would give a violent new twist, not only to astronomical chemistry, but to the periodic table.