Do science courses need hands-on labs to be effective?

The practical lab is where abstract theory connects to physical reality

The last two years have (along with a few other effects!) brought back a debate around chemistry teaching. Many university-level classes had to switch to virtual or remote formats at various points of the pandemic, of course, and that presented an immediate difficulty for science courses that include laboratory work. This poses two sets of questions. Most pressingly, how to modify (for example) classic organic chemistry courses, where lab work has been considered essential. But the bigger question is whether that belief is accurate at all: do these courses really need hands-on labs to be effective? 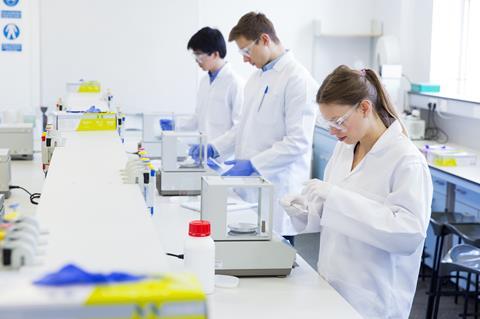 Practicals, properly managed, can be a massive aid in building students’ understanding of the chemistry theory they’re learning, as well as honing observational skills and dexterity

That’s going to depend on what you mean by effective, and what you’re trying to accomplish by teaching people organic chemistry. In the US, that debate has been underway for some years, since the course has long been a required part of pre-medical studies for entry into post-graduate medical school. But is it really necessary for future physicians to learn about alpha-carbonyl condensation mechanisms or cycloaddition reactions? Such topics literally never come up during actual medical practice; two semesters of Shakespeare would probably be of more direct use. Medicines are, of course, discovered and produced using chemistry and biology techniques, but very, very few medical doctors will ever do any of that work themselves.

Reactions are not only lines and symbols, curly arrows and formulae. They are real physical processes that make a change in the physical world

So, if the direct knowledge is not the point, what about the indirect? There’s a not-easily-dismissed argument that organic chemistry is one of the first courses that presents a large, systematic body of scientific knowledge that most students will never have seen in any detail. Organic has a reputation as a ‘weed-out’ course for medical and graduate education. The ability to take on a topic like this, to learn, remember, and generalise from this new material is an indicator of how one’s later studies might go, since there will be many such detail-rich fields to come. At the same time, this function does not necessarily shed glory on organic chemistry in and of itself!

Where does the laboratory course fit into this? I am an organic chemist, so keep in mind that I enjoyed my first organic course and found it interesting (which puts me into a minor faction of the human race) and that I have made my living since then by knowing the field. That said, I think that the lab is where some of that glory really does come in. I believe that one of the important parts of learning such a subject is connecting it to physical reality. Organic chemistry reactions are not only lines and symbols, curly arrows and formulae. They are real physical processes that make a change in the physical world. Writing down the mechanism of Fischer esterification is one thing – but taking pungent, corrosive glacial acetic acid and thick, smelly isobutanol and converting them with your own hands into something new: a clear liquid (isoamyl acetate) that smells like every banana freighter in the world has been beached upwind of you in the hot sun – well, it feels like alchemy, like magic. You worked it with your own hands, with your own developing skills, by measuring, mixing, and weighing, and you have put the principles you learned to work right in front of you.

And this is of course how medicines and materials around us all are made, from working chemistry on liquids, powders, and gases according to those laws and reactions that human intelligence has uncovered. I can’t help but think that only knowing chemistry (or any science) in the abstract misses something essential. The biggest point about any scientific field is that it is connected to the real world, that it is part of Francis Bacon’s goal of ‘the effecting of all things possible’. Chemistry without any lab work at all is like studying astronomy without ever looking through a telescope or botany without ever identifying the parts of a living plant. In all of these areas there is of course a great deal to learn outside the laboratory (or indeed, before you ever set foot inside it!) Can someone learn to cook, be said to understand cooking, if they have only read recipes and never once prepared a meal?

For more about teaching safe, effective and interesting practicals, read articles from Education in Chemistry