Carcinogens in cigarette smoke hang around indoors like a bad smell

Carcinogens in cigarette smoke hang around indoors like a bad smell - we know that. What we didn’t realise until now is that nicotine residues absorbed on indoor surfaces (carpets, wallpaper etc) react with gases in the air to produce even more cancer-causing carcinogens. 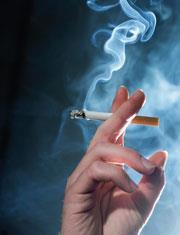 According to the World Health Organization, tobacco is the second major cause of death in the world. It is responsible for the death of one in 10 adults, killing 5.4 million people annually. Furthermore, if current patterns continue, smoking is predicted to kill 8 million people per year by 2030.

So what is the significance of this new discovery? Desorption of carcinogenic tobacco-specific nitrosamines or TSNAs (originating from cigarette smoke) from indoor surfaces, a process coined ’third-hand smoke’, was already known to be an additional source of exposure to these toxins. The new research has shown, for the first time, that nicotine residues absorbed on surfaces can react with atmospheric species, such as nitrous acid - providing another source of TSNAs.

Children in smoking households are of particular concern, because they interact very differently with their surroundings to adults: touching and licking surfaces and fabrics. It has been estimated that their exposure to third-hand smoke could be up to 20 times higher than adults. The new findings make the situation for these children look even bleaker.

In light of this discovery and its potential impact in children, is there something that could or should be done differently? During the last decade, governments around the globe have made the fight against smoking one of their main public health priorities. The EU has tackled the issue of smoking prevention and cessation from many different fronts. A series of schemes, such as ’Help - for a life without tobacco’, designed to raise awareness and educate the public in the dangers of smoking have been run. All tobacco advertising and sponsorship on television has been banned since 1991, and in 2005 this was extended to cover other forms of media. More importantly, legislation has been implemented to limit exposure to second-hand smoke in public places and the workplace.

These measures are working, but can we go a step further to protect the public against this newly found threat? This would mean regulating what people do in private. Governments can protect people in public places, but they haven’t got the mechanisms to protect those exposed in the home or in the car. Surely that would be intrusive, impossible to police and simply completely unrealistic. So to the question ’can we implement smoking bans at home?’ I’m afraid my answer is no.

Instead we must continue to work at reducing the human impact of smoking through educating people, raising awareness, offering support mechanisms to those who’d like to quit smoking and finding novel ways to discourage those who are thinking of taking it up. Slowly but surely we must succeed in eradicating a problem that continues to plague the developed world and will certainly become a serious concern in the developing world in the coming decades.