The world is drowning in a sea of plastic bags. Even the Women’s Institute in the UK has launched an attack on supermarkets for their overuse of plastics in packaging and at the checkout. Chemists are helping address the problem with better biodegradable materials, and by highlighting and tracking the environmental impact of plastics and their breakdown products. But consumers’ reliance on plastic carrier bags needs tough action. It will not be stopped by introducing biodegradable or compostable bags. Only a mass attitude change away from disposable packaging will solve the problem.

Plastic bags have been outlawed in Bangladesh and the state of Maharashtra, India. Rwanda has announced a crackdown on plastic bag use. These moves have not turned people away from plastics, but rather sparked a plastic bags black market. 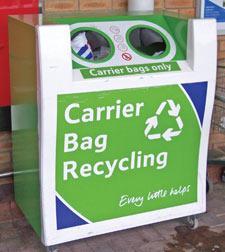 Ireland introduced a plastic bag levy in 2002, charging consumers €0.15 (?0.09) per bag. Plastic bag consumption dropped by 90 per cent almost immediately, and an estimated 18 million litres of oil was saved. In the first three months of the scheme the Irish government collected over €3.5 million. That’s 23 million plastic bags.

Estimates for UK plastic bag use range from the Department for Environment Food and Rural Affairs’ eight billion a year to 17.5 billion claimed by Chris Huhne, Liberal Democrat shadow environment secretary. Huhne says the government should introduce a plastic bag tax, to make supermarkets and consumers think twice before they give away and use plastic bags.

Some retailers are taking action. In the UK, Swedish furniture manufacturer Ikea is going to charge for plastic bags, claiming it will save 20 million bags a year. Supermarket chain Tesco is introducing biodegradable bags in all stores, but this tactic was rejected by competitor Sainsbury’s who told Chemistry World that degradable bags don’t work. Sainsbury’s trialled compostable bags but said the public wasn’t interested.

’Plastic carrier bags are the best environmental choice you can make,’ cries the publicity material of the carrier bag consortium (CBC), which represents UK carrier bag manufacturers. CBC says that plastics account for just 2 per cent of the world’s oil supply, and plastic bags make up a smaller proportion of that (although the EA use a figure of 4 per cent plus an additional 3 to 4 per cent during manufacture). If every oil-using industry took CBC’s attitude, oil would surely be used up at an even more alarming rate than now.

With 300 carrier bags used per household per year there is little wonder that ocean seabeds have as many as 80 plastic items per hectare. There is only so much science can do. Changing attitudes will take much longer.