Entertainment for the masses

Any chemist jetting off to the far-flung Andromeda galaxy in the latest Mass effect game is likely in for a shock. Go to the chemistry lab and – surprise – it’s been turned into a bar. The team’s sole chemist, despondent and resigned to his fate, has been reassigned to mix your cocktails. ‘Welcome to my lab,’ he sighs. ‘Bar. Whatever. Have a drink.’

Chemistry has always been the poor man of science in video games, but Mass effect: Andromeda has reached a new nadir. The game sets you up as a colonist that’s made the 600-year journey to colonise a new galaxy, along with a collection of engineers, scientists and militant types. You can walk around your base, speak to people about their scientific interest and learn a little about xenobiology, the physics of black holes or asteroid mining. Yet chemistry, it seems, is less important to intergalactic exploration than a heavy drinking session. ‘I just want guinea pigs,’ the chemist-turned bartender says as he asks you to test his latest tipple. ‘Chemists need guinea pigs, don’t they?’ That the game then spends the next 60 hours asking you to travel around planets detecting various elements through futuristic spectroscopy is quietly ignored. 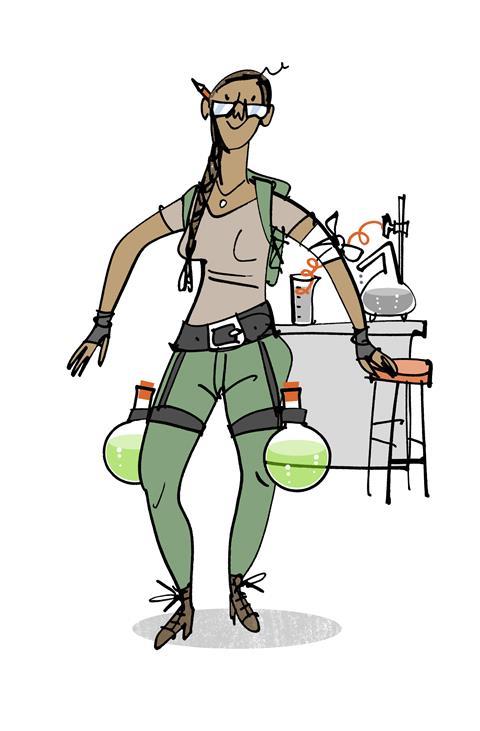 While Mass effect may be the most notable failure in the chemistry games pantheon, it’s not alone in trying to depict the science. Fallout 4, still a perennial favourite, has a glut of ‘chemistry stations’ set around its post-Apocalyptic Boston. Its late 1990s predecessor, Fallout 2, featured a quest to hunt down a bundle of chemistry journals to improve your armour. Other games rely on their characters having molecules tattooed on their bodies to demonstrate their chemistry street cred. These range from the fairly accurate – 2013’s Tomb raider features a character with the molecular structure for caffeine on his neck – to the downright ridiculous. In gangster epic Grand theft auto 5, for example, you can have your street thug adorned with a nonsense molecule featuring the cardinal sin of valency: a ‘Texas carbon’ with five covalent bonds.

It’s not just chemists who fare particularly badly in the digital world, either. In the early 90s, Sierra released Freddy Pharkas: frontier pharmacist, a rootin’ tootin’ cartoon adventure where you had to extemporaneously prepare a host of quack remedies for a Wild West town. Get it right and you cure the town of explosive flatulence; get it wrong and you give your sweetheart Penelope a full-grown beard.

Yet it’s also worth remembering that there are a few gems where computer games and chemistry excel. Crowdsourcing research through gamification – turning data searches into a game and opening it up to the public – is an exciting new option for science. Already, teams have enabled the general public to scour galaxies for items of interest to astronomers, or riffle through molecule databases to identify potential drug leads. The best-selling game of the 21st century, Minecraft, allows users to create more or less anything in a virtual Lego set. Using the game, enterprising students at the University of Hull’s department of chemistry teamed up with the Royal Society of Chemistry to create Molcraft: a virtual world filled with oversized molecules to explore. The team even went as far as to create complex structures such as myoglobin.

While these games are still anchored in teaching chemistry or serving a larger purpose – not just part of the narrative – there is one final, perennial ally chemists can embody in the virtual space. The Adventures of Sherlock Holmes remain some of the most popular mystery games available, selling millions of copies worldwide. In each tale, the player is required to perform a reasonable approximation of chemical analysis at least once to get to the next stage of the game. Chemistry can be fun in video games, not just about stocking the bar, after all.

Editor: Chemistry World asked Bioware, creators of Mass Effect: Andromeda, why the chemistry lab had been turned into a bar. They did not respond.