When I had my house renovated a few years ago, our builder noticed something in the skylight. Smack in the centre of the triple-glazed pane was a set of gorgeous multicoloured rings. ‘Newton’s rings’, I said, as I made them expand and contract by pressing my fingers against the pane. ‘Aren’t they beautiful?’ He looked distinctly unimpressed; to him it was just a flaw.

Like the iridescent colours that appear in a pool of greasy water, films and gaps between transparent materials give rise to delicate colours. Sadly, Newton’s own thoughts on the origin of the coloured fringes were quite vague. It was not until the 1830s that the English astronomer George Biddell Airy, one of the great proponents of the wave theory of light, laid down the rigorous theory to describe the path of light passing between two parallel plates separated by a narrow gap, predicting that there would be interference. Airy’s formula would form the basis of an exceptionally sensitive interferometer that has been in use for well over a century. It was developed by a man who was obsessed with astronomy as a boy. 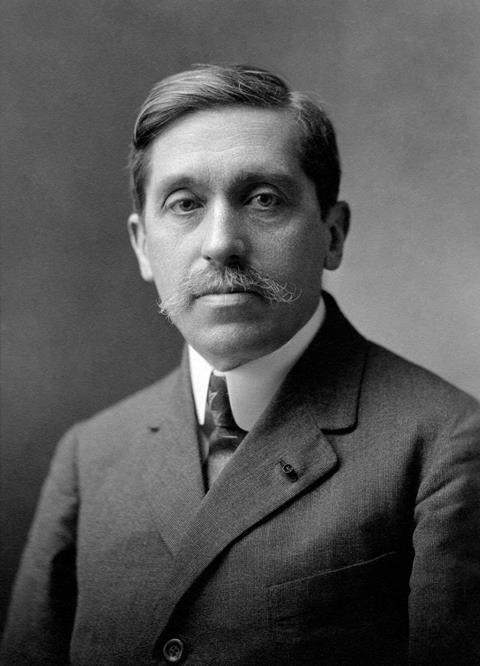 French physicist (1867–1945). Early authority in optics and discoverer of the ozone layer

Charles Fabry was born in Marseille, France into a scientific family, and followed in the footsteps of his  grandfather and three older brothers by studying at the École Polytechnique in Paris. After graduating, Fabry returned to his hometown to study for a PhD with Jules Macé de Lepinay, France’s leading expert on optical fringes. In those days, new graduates were sent to teach in technical colleges for a few months before taking up more permanent academic positions, and Fabry spent time in several cities across France, including Bordeaux. One of the teachers there, Raymond Boulouch, made an interesting observation while demonstrating Newton’s rings using a sodium lamp. He part-silvered two pieces of optically flat glass, placed them exactly parallel and focused a beam of light onto one side. The transmitted light consisted of a series of concentric circular fringes. By adjusting the gap between the plates, the fringes resolved into pairs – the doublet splitting of the two spectral lines in the yellow region of the visible spectrum that correspond to sodium. Was the experiment inspired by conversations with Fabry, whose newly-written thesis focused on fringes?

Returning to Marseille, Fabry became interested in the accurate measurement of small distances and believed interferometry might provide a solution. He teamed up with a lab colleague, Alfred Perot. While Perot’s background was in thermodynamics, he was an exceptional experimentalist with a real flair for machine work and construction. Fabry looked after the optics; Perot focused on the rest. Together, they built a device similar to Boulouch’s.

The crucial insight made by Fabry and Perot was that the silvering caused multiple reflexions back and forth between the plates. As the number of reflexions rose, so did the sharpness of the lines. The key parameters were the separation of the mirrors, the refractive index of the gas (or vacuum) between them and the degree of silvering of the faces. This allowed the interferometer to be used in several ways. As a spectroscope, the fringes allowed very precise measurement of the wavelengths of spectral lines. Their instrument had a resolution far exceeding even the rival Michelson interferometer. While Michelson’s device required a whole table, Fabry and Perot’s cavity could be held by hand. With it, they resolved several previously unobserved hyperfine lines in the spectra of several elements.

The device could also be used to measure lengths to a precision of less than a wavelength. This required determining the order of the fringes. This was done by monitoring a pair of spectral lines – as the separation between the plates was changed, the lines overlapped and separated periodically. The resolution was so good that the pair began to refer to their device as an étalon, or reference gauge – a word that has stuck ever since.

It is telling of the exquisite resolution of the etalon that the metre would come to be defined in terms of wavelength of a particular transition of atomic krypton. Astronomers began to put etalons between the objective and the camera to record stellar spectra. Today, if you buy a ’solar filter’ for a home telescope, what you get is a Fabry–Perot etalon, the spacing selected to act as a narrow band-pass filter for the alpha line of hydrogen. In many ways lasers can be thought of as Fabry–Perot devices with one end fully silvered. Indeed laser cavities are often built with an internal etalon to make them single mode.

Fabry would make numerous other contributions, perhaps most notably discovering the ozone layer in 1915. He worked with Perot until 1921, when he became Professor at the Sorbonne in Paris, and later head of the École Polytechnique. Today, 4km long descendants of the original etalon sit in each arm of the Michelson interferometers of LIGO, the experiment that detects the infinitesimal distortions of our world produced by gravitational waves. While at home, my skylight, with its beautiful optical flaw, connects me to the very fabric of space-time itself.