Fire with no spark

Fire is the archetypal human invention. Yet as a reaction, it may occur in nature too: most obviously when lightning strikes the ground, but often by some sort of spontaneous combustion.

The spread of tobacco smoking created a great human demand for fire, and resulted in many artificial ways of making it. One of these is that mighty chemical invention, the match. Before the match, sparks were an almost universal way of starting a fire. For civil use, the tinderbox used flint and steel; in weaponry, firearms generally used the flintlock. 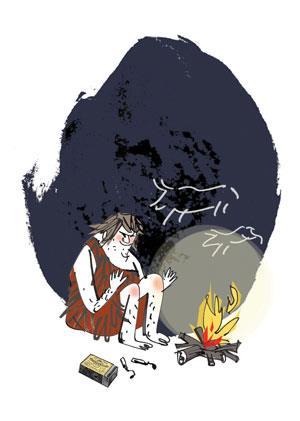 In modern times, sparks have made a comeback, thanks to the popularity of lighters. But spark-free natural fire still puzzles us. ‘Will o’ the wisp’ – mysterious natural fire that flickers and floats around – is often spotted in marshes at night. Unwary travellers may take it as a human signal and wander fatally into the marsh. Haystacks can catch fire without any intervention, and even human beings sometimes seem to spontaneously burst into flames. What is going on?

Mechanical friction is probably not the answer. While you can indeed make fire by ‘rubbing two sticks together’, the process is slow. Natural examples seem unknown. No natural source of frictional energy in a marsh, for example, seems intense enough to start a fire.

Organic spontaneous combustion seems more hopeful. Many decay organisms release methane as ‘marsh gas’, which is at least combustible, and could catch fire indirectly. When phosphorus-containing proteins decay, the products may well contain the volatile liquid diphosphane, P2H4, which ignites spontaneously at room temperature. I can imagine some marsh microorganism might generate a little P2H4 from breaking down protein. If released underwater, the diphosphane would rise and ignite spontaneously when it met the air. In a marsh, this could then light the larger clouds of methane released by other microbes. This is a mere biochemical guess, as I do not know of any microorganisms that break down proteins to diphosphane, although some bacteria have been shown to produce phosphine (PH3) – a similar volatile phosphorus compound – when cultured under very anaerobic conditions.1

Spontaneous human combustion is a bigger puzzle. You can generate 3.3MJ/kg of energy by burning human tissue; and of this only 1.7MJ/kg is needed to evaporate the water in it. So burning a human body should give 1.6MJ/kg of free heat – over 100MJ for a whole body. An efficient crematorium should not need extra fuel (of course, in practice, they do). Thus the claims of spontaneous human combustion do at least make energetic sense. Charles Dickens’s splendid if fictitious account of the spontaneous combustion of the eccentric Krook in Bleak house was based on real reports. Modern reports rely on later examination of the remains, and often note the failure of the apparent fire to spread to other combustibles nearby. They suggest that the person died naturally, that the process in fact was cold and slow, and the remains only look burned because we interpret the residue as fire ash. Not until somebody observes the process going on – perhaps by seeing it happen to a joint of meat – will the mystery be solved.