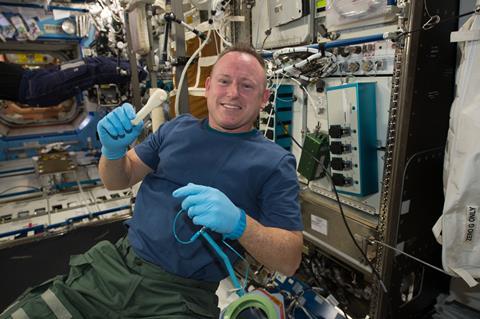 Nasa astronaut Barry Wilmore holds a 3D printed ratchet wrench from the new 3D printer aboard the International Space Station. The printer completed the first phase of a Nasa technology demonstration by printing a tool with a design file that was transmitted from the ground to the printer

In 2014, International Space Station commander Barry ‘Butch’ Wilmore had a problem. He needed a torque wrench for a repair but it was missing from the toolkit – one of the joys of zero gravity. Normally, he’d have to wait for it to arrive on the next resupply rocket. This time, Nasa emailed Wilmore a file for the on-board 3D printer. Four hours later, Wilmore was holding the first object to be designed on Earth and sent digitally to space to be printed there.

3D printing, or additive manufacturing if you like to sound fancy, has been around for a few decades. But it took a bit of time for it to firmly move from gimmick to serious production method. Now it serves everything from biotechnology and engineering to art and food. And as our latest feature shows, it can work at incredible scales and levels of complexity.

3D printing is also disrupting the pharmaceutical industry. In 2015, the US Food and Drug Administration approved the first 3D printed tablet. Spritam is a reformulation of anti-epileptic seizure drug levetiracetam and 3D printing gives it a unique porous structure that literally makes it easier to swallow. 3D printing is also the ideal method for mass-producing single tablets that contain multiple prescriptions – another potential win for patient compliance. However, the concept isn’t foolproof. At the beginning of February we reported on one of the first studies of its kind to reveal problems when producing 3D printed polypills. An unexpected chemical reaction between a photopolymer and one of the active ingredients meant the final formulation was missing a crucial component.

In reading around 3D printing drugs, plenty of potential drawbacks come up: regulatory hurdles, the potential for blueprints to be mislabelled or hacked, and worries that 3D printers combined with automated synthesis could make it easier for people to access illegal drugs. Among all that, not once did I see someone question the chemistry.

Yet it’s clear that there are still chemistry problems to solve before the first 3D printed polypill gets regulatory approval. So kudos to the team for reporting this one – to solve a problem, you need to know that the problem exists, and when it comes to drugs we can’t wait for serendipity to strike. I wonder how simple a decision it was for the researchers to share their findings. Whatever the case, it’s an excellent example of transparency that others should follow.