Germany-based scientists have prepared a resin combining isocyanate and acrylate moieties that works with stereolithography to 3D print flow reactors. These reactors are then capable of undergoing surface functionalisation to obtain specific surface properties that are useful for photo-oxygenation and photoredox catalysis reactions.

Stereolithography is a widely-used 3D printing approach that creates complex objects by using light to cure a liquid resin. These resins, however, tend to exhibit poor resistance when exposed to organic solvents and are hard to see through, thus hindering their chemistry applications. Axel Grisbech, from the University of Cologne, says the new resin his team has developed addresses these issues by ‘offering the possibility of immobilising a huge variety of catalysts onto the surface, while at the same time being resistant against the harsh conditions of chemical syntheses.’ 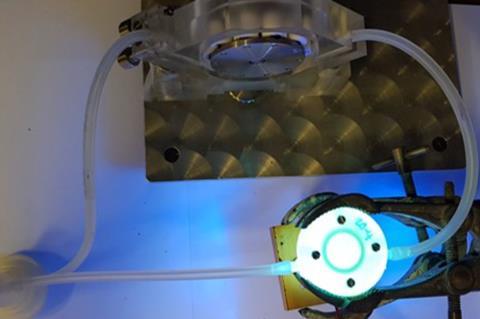 Flow reactors printed from the resin were tested in photochemical reactions

‘The biggest achievement of this hybrid resin is the combination of three important features: chemical resistance, transparency and the possibility of post-functionalisation,’ comments polymer chemist Eva Blasco from the University of Heidelberg, Germany. ‘Chemical resistance is especially challenging since most of the polymers that are currently used for 3D printing suffer from poor resistance against organic solvents. Furthermore, the possibility of post-functionalisation makes the system more versatile and opens new possibilities for its use in chemical synthesis and catalysis.’

In addition to offering chemical resistance and transparency, Grisbeck says ‘the ability to covalently link a catalyst to the reactor surface adds value to the flow-reactor in many ways. For example, the removal of the catalyst is not required and the reactor can be used for many reaction cycles without adding any further catalyst.’ 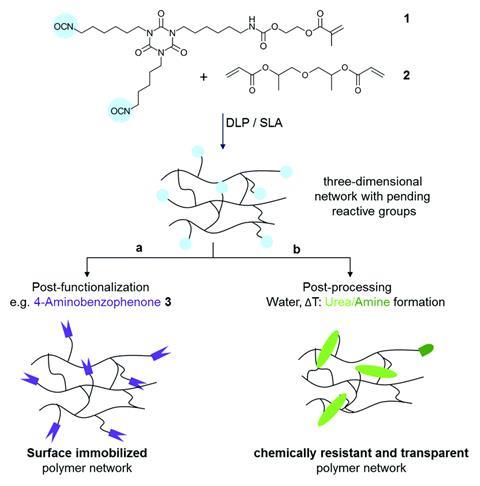 Annalisa Chiappone, whose research at the Polytechnic University of Turin in Italy focuses on 3D printing and its potential applications, also notes that surface functionalisation is a highly desirable characteristic in flow reactors. ‘[It] offers very good versatility to the printable material enabling the specific reaction proposed for the application and making the material suitable, in principle, for several other reactions according to the performed post functionalisation.’

Griesbeck and his co-workers intend to expand their current work for other reactions by ‘testing other catalysts and the influence of immobilisation on catalytic activity’.