Porous pills could be largest industrial 3D printing use 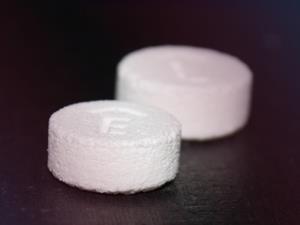 The large, porous tablets rapidly disintegrate in contact with water, and can package controlled, personalised dosages

The first ever approval by the US Food and Drug Administration (FDA) of a 3D printed tablet promises to make medications easier to swallow than existing formulations. US firm Aprecia uses an aqueous fluid to stitch together multiple layers of powder in its Spritam pill, a reformulation of anti-epileptic seizure drug levetiracetam. Unlike conventional compressed tablets, this gives the drug a porous structure that quickly disintegrates in liquid. This is particularly useful for patients who otherwise struggle to take medication, such as children, who comprise around a sixth of the nearly three million US epileptics. Spritam is ‘first in a line of central nervous system products’ that Aprecia will submit to the FDA ‘over the next several years’ says chief executive Don Wetherhold.

Aprecia’s ZipDose 3D printing technology builds on a concept developed by Michael Cima and colleagues at Massachusetts Institute of Technology (MIT), whose patents Aprecia has exclusively licensed for pharmaceutical applications. Cima started his work in this area in 1990, so this approval has been a long time coming, but now it’s here he says he’s ‘ecstatic’. ‘Arguably these dosage forms produced by Aprecia will soon be the largest volume mass-manufactured object made from these techniques,’ he enthuses.

Wetherhold emphasises that Aprecia has added its own proprietary knowledge to the MIT technology. ‘We have invested considerable time, talent and resources to achieve manufacturing scale,’ he says. The firm’s ‘binder jetting’ approach uses two inputs, one powder, one liquid. ‘Our process spreads thin layers of powder and selectively deposits liquid droplets to bind the powder together, layer-by-layer, to make three dimensional parts,’ he explains.

‘Powder particles that were unconnected initially dissolve in whole or part into the deposited liquid,’ continues Thomas West, Aprecia’s manager of intellectual property. ‘When that liquid dries, it leaves “bridges” of material attached to remaining particles. This is the primary binding mechanism.’ The highly porous structures this produces suck up liquid, rapidly dispersing to form a suspension of the medication. This approach can also achieve higher drug doses than rival freeze-drying-based rapid-dissolution technologies, Cima adds.

Following Spritam’s approval in July, Aprecia hopes to make it available in the first quarter of 2016, with the pills manufactured on its proprietary equipment. The company is partnering with US firms inVentiv Health (for sales and commercialisation) and Prasco Laboratories (for distribution). Aprecia intends to stick to conventional centralised manufacturing, rather than distributing equipment to allow local production.

The ZipDose formulation disperses in water after four seconds, whereas other ‘fast-melting’ tablets can take minutes

‘It is great that the regulatory process is open to innovations in this area of significant opportunity,’ comments Morgan Alexander from the University of Nottingham. Alexander and his collaborators, whose funders include pharma companies AstraZeneca and GSK, exploit similar disintegration capabilities in developing ‘polypills’ containing multiple drugs, using different 3D printing technologies. ‘We very much hope that decentralisation will be the next step, one that we are certainly working towards,’ he says.