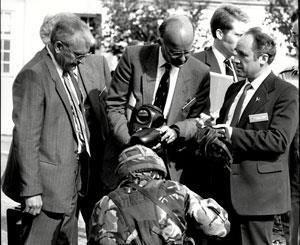 In keeping with today’s climate of arms reduction and openness, a 13-strong Soviet team, led by Ambassador Y K Nazarkin, has visited the Chemical Defence Establishment (CDE) at Porton Down in Wiltshire, often called ‘Britain’s most secret research station’.

As well as visiting the CDE and the nearby Centre for Applied Microbiological Research, the Russian and British teams discussed chemical warfare (CW) agent production, storage, delivery, detection, protection, decontamination and medical countermeasures. Among the CDE facilities exhibited were those built for safe destruction of CW agents. A detachment of the Royal Green Jackets made a 45 minute demonstration of British Army protection and  econtamination procedures.

A British delegation will take part in a visit to the equivalent Soviet establishment at Shikany, probably later this month, to build confidence through the exchange of information.

Tessa Solesby, British Ambassador to the Conference on Disarmament in Geneva, said that the visits were part of the process ‘to further the negotiations in Geneva for an effectively verifiable Convention banning chemical weapons’.