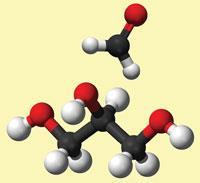 Formaldehyde and its self-condensation product, glycerol

Formaldehyde may have a part to play in alleviating food shortage. No success has ever attended attempts to use as food the mixture of sugars in ’methylenitan’ (produced in 1861 by the Russian chemist A M Butlerov by from aqueous formaldehyde) and similar products, but it is said that one of the major oil companies has developed a modification of the alkaline self-condensation of formaldehyde which gives cheap glycerol; glycerol can replace a surprisingly high proportion of natural fats and sugars in the diet. (From an article celebrating the centenary of the isolation of formaldehyde by A W Hofmann,   Chemistry in Britain, November 1968)

Ed. Glycerol is widely used in the food industry as a filler, a humectant and as a sugar substitute.

In recent years there has been a huge surplus of crude glycerol in world markets since is it is a byproduct of the ever-increasing biodiesel production. Prices of glycerol have fallen and new uses are being actively sought.

At the American Chemical Society (ACS) meeting in Philadephia in August this year, Zhiyou Wen at Virginia Tech’s College of Agriculture and Life Sciences, US, presented a paper on the use of crude glycerol byproduct from the biodiesel industry as a carbon source for microalgae, producing omega-3 fatty acids. The omega 3 enriched algae could then be used as feed for fish, poultry and other animals.