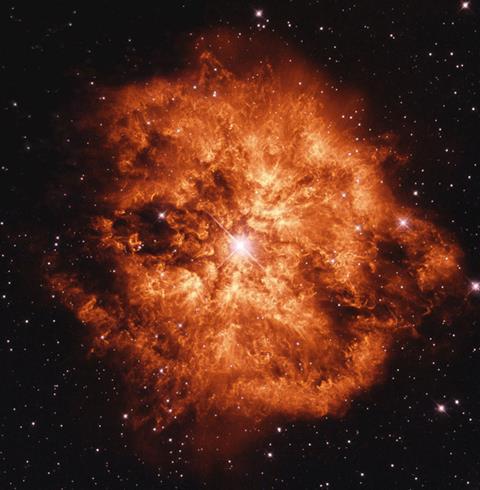 The word atom comes from the Greek word for ‘indivisible’. The ancient philosophers believed that matter could only be broken down so far: moving to ever smaller scales, you would eventually arrive at discrete units that could only change through their interactions with each other. Of course, we now know that atoms are not like this. They can be dismantled and rebuilt again and again, but we tend to only associate such behaviour with the super heavy elements that we had to make to discover and which exist for mere seconds before vanishing. Here on Earth, it is much harder to appreciate that the elements of everyday life – carbon, copper, calcium – are also transient. In the far reaches of space, however, those elements are being dismantled and rebuilt all the time.

Indeed, the Big Bang gave us only the three lightest elements: hydrogen, helium and lithium. All the rest were made in stars in the time since. When a star produces new atoms, it either locks them up in the stellar remnant or expels them into the interstellar medium. New stars form from the left-overs in an eternal cosmic cycle, meaning that the more recently a star formed, the higher the abundance of the heavier elements in it. The branch of astronomical research studying this build-up of elements over time is called (galactic) chemical evolution.

The first aim of measuring the chemical evolution of a specific element is to find out in what type of star, or stars, it forms, and at what rate. Once this is known, measuring the abundance of the element, or abundance trend compared with another element, in a stellar population might tell us something about the history of the stellar population in question: when and where did it form and how long did it take? This in turn will help us understand the formation of galaxies and their components.

The origin of fluorine remains something of a mystery, because it is difficult to study. Traditionally, stellar spectroscopy has focused on determining stellar abundancies from atomic spectral lines in the optical wavelength range, and for ‘normal’ stars fluorine does not show any such lines. Instead infrared HF molecular spectral lines have to be used, but many of them fall in wavelength regions for which our atmosphere is opaque, making them invisible to terrestrial observatories.

Furthermore, fluorine has only one stable isotope, 19F, and is easily destroyed in stellar interiors, which has led to a very low cosmic abundance compared with other elements of similar mass. For any to survive production, the fluorine must be expelled into the interstellar medium quickly after its production. For this, three mechanisms have been proposed. First asymptotic giant branch (AGB) stars, which are like our sun but in a later evolutionary stage, may eject fluorine when swollen up to red giants. Second, core-collapse supernovae, the explosive events that coincide with the deaths of massive stars, might be responsible. Lastly, the fluorine might be saved from destruction in very massive stars called Wolf-Rayet stars by the radiatively driven mass-loss exhibited by these stars during their life-times.

The production of fluorine by AGB stars has been observed, but the question of whether this process explains all the fluorine found in the Universe remains. During the past few years, there have been studies showing the importance of the other processes. If it can be shown beyond doubt that the production of fluorine by AGB stars is enough to explain the cosmic abundancies measured, this will tell us that the physical conditions in core-collapse supernovae and Wolf-Rayet stars are such that fluorine is not created, or is destroyed afterwards, forcing us to change the models and understanding of these stars. If on the other hand fluorine production can be shown in Wolf-Rayet stars, the fluorine abundance trend of a stellar population will help us determine the number of very massive stars born in that particular population. Right now, we don’t know whether the central parts of our galaxy evolved differently, with a greater fraction of massive stars compared with the outer parts where we live. If it were proved that fluorine was produced in Wolf-Rayet stars, it would be the perfect element to settle the debate. Just last month, we observed a sample of stars ten times larger than previously observed samples using telescopes on Kitt Peak in the US and on the Spanish island of La Palma, so we may be close.

Thus, when you consider the ebb and flow of its cosmic life, fluorine becomes more than just the stuff that keeps your teeth in good health: it is a cosmic marker that can tell us where the Universe has come from and where it might go from here.

Henrik Jönsson is a researcher at Lund University, Sweden