The BBC’s spectacular Rio Olympics coverage verified that there’s still mileage in Greek ideas about the aesthetic drama of the human form. As one couch potato took in the high-definition and ultra-slow motion footage, occasionally making his own strenuous efforts to reach for the remote control, it became apparent that several sports take place inside a soft white fog of chalk dust. It rises from the hands of gymnasts, weight lifters and hammer hurlers – a pallid mist captured by thousand-frames-per-second video, following gently in the draught of an athlete’s movements as if sad to have been turfed out of its resting place.

Gymnasts’ chalk is always magnesium carbonate (MgCO3), but beyond that baseline fact there is a variety of recipes and forms, with users developing understandable loyalties to whichever version best prevents them from colliding with the mat. The goal is consistent: judiciously control friction, stop sweat, and kill bacteria, a delicate balance that magnesium carbonate turns out to be ideal for. Actual chalk chalk – the calcium carbonate used to write on blackboards – tends to be more soluble in water, making an unintended descent from the asymmetric bars all too likely once a gymnast’s hands start to perspire.

The pool of scientific research into chalk’s role in gymnastics is shallow, though its use is backed by a vast programme of empirical testing in gyms throughout the world. The same rule holds outdoors, where rock climbers also use chalk and where the penalties for loss of grip can be rather more severe than missing out on a medal. Climbers can in theory use chalk more judiciously, applying it when they feel the rock under their fingers is slippery and greasy, or to counter the body’s natural sweaty reaction to anxiety, an occupational hazard. 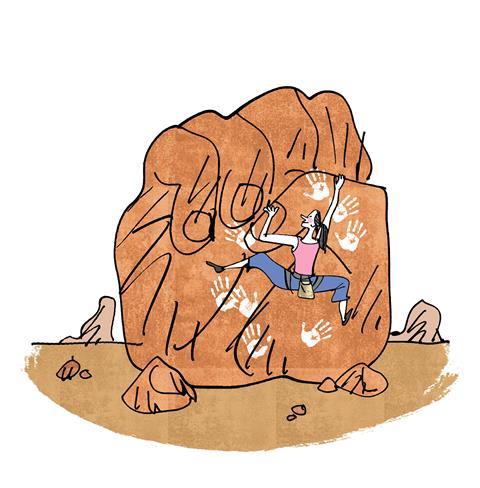 There is historical overlap between the two arenas. John Gill, considered the father of modern bouldering – the kind of ascents carried out without ropes or harnesses – was a gymnast before he tackled rocks. Starting in 1954 by climbing Stone Mountain in Georgia, US, Gill honed his technique by seeing rock climbing as a gymnastic activity rather than an extension of hiking, one that should involve what he called ‘a serious use of momentum’. ‘No gymnast would work on challenging releases without chalk – neither should a climber,’ he once said.

One consequence of this has been the appearance of magnesium carbonate in locations where geology didn’t originally put it, in the form of hand-sized patches on otherwise naturally formed and weathered rocks. This has led to a question of physics acquiring a more ethical dimension. Chalk plus sweat plus weather can equal a slimy layer of muck on the rock surface, an eyesore if not a permanent marker, and a potential conflict with the broadly ecological mindset of outdoor sportsmanship. David Black, an author and climber, once said that ‘there is no real ethic regarding chalk, possibly because modern climbers have no ethics’.

While climbers may debate that, the less adventurous among us might note the symbolic potency of human hand prints anywhere on natural rock, examples of which are among the oldest signs of human existence going back nearly 40,000 years. The global ubiquity of the stencilled image of a hand, outlined in a spray of pigments like iron oxides, kaolin, or manganese oxide, ties the ancients and modern climbers into the same dialogue via pigment or chalk: a palmate proof of life. ‘I was here,’ says the climber’s hand print. ‘I was here first,’ says the rock.