Why I travel the world in the name of science

Ytterby is tiny. It’s basically a bus stop, a few houses, and a set of steps up to a rocky ravine. White Sands Missile Range, deep in the big empty heart of New Mexico, is even more Spartan. There, the only residents are ants obsessed with radioactive material and military personnel testing the latest toys in the US arsenal.

But both sites still graced my scientific bucket list. Ytterby has proven to be the richest source for the discovery of natural elements on the planet, with four named directly after the sleepy cabins on the edge of the Stockholm archipelago. And White Sands – open only twice a year to the public and set in a desert with the welcoming epithet of ‘the Journey of the Dead Man’ – rewards anyone willing to make the nine-hour drive from Phoenix with a black obelisk to mark the spot Gadget, the first nuclear bomb, went off. Atomic selfies are cool. 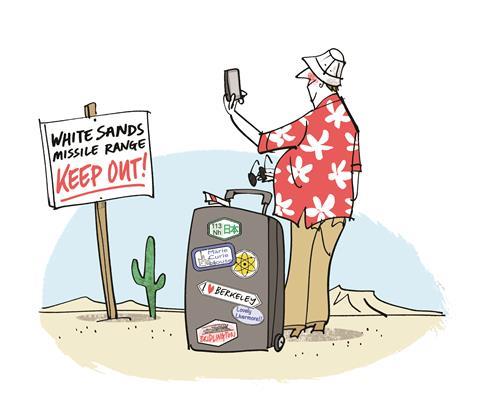 I’ve been working through a list of geeky tourist traps for the past few years, keen to avoid the museums and see the real locations that constitute our scientific heritage. It’s taken me to some very odd corners of the world to see very obscure things – from Taiwan to see the 730-ton earthquake damper at the top of the country’s tallest building through to the room at the University of California, Berkeley where plutonium was isolated for the first time. Sometimes there’s an easy photo op, such as my selfie with Abel, the first monkey in space who has been lovingly stuffed and preserved in Washington, DC. Sometimes I’ve been chased off by armed guards, such as trying to see the fish pond where Enrico Fermi discovered slow neutrons. And sometimes it’s all been a little anticlimactic, like my trip on the first ever railway line (you end up in either Stockton or Darlington, both of which I wouldn’t recommend).

It’s hard to say how far I won’t go for a little geek-out. Sailing trips out into the Thames Estuary to see the Maunsell Forts? I’m there. A five-hour round trip to see ridiculously awful sculptures of dinosaurs at Crystal Palace? Count me in. Skulking around the lanes of Cambridge to gawk at the lab where the electron and neutron were discovered (and, barely 20 metres away, the pub where the breakthrough of DNA was celebrated)? Guilty. I’ve sipped coffee in Livermorium Plaza (116 Livermore Street, Livermore, US) and toured the small house where Marie Curie, the greatest chemist of them all, lived in Warsaw. I once braved a 40°C heatwave to walk a trail of chemical element plaques in Wakō, Japan that led to the doorstep of RIKEN, home to element 113. So what if a taxi would have been easier?

If this hobby sounds strange (and expensive…) then you’re right. It’s also swimming in privilege and horrendous for my carbon footprint, as well as missing the point of these accomplishments entirely. Much like a map to the homes of Hollywood stars, there’s something uncomfortable about the idolisation of a geographical spot that, in truth, has very little to do with the achievement it represents.

But the pilgrimages are worth it because they spawn adventures just as ripe, real and raw as heading to the beach or trekking the Andes. The people, the cultures and the spectacular locations are all reminders that science is a constantly evolving entity, and one that is painfully human in its hopes, dreams and heroic failures. With each trip, I feel compelled to go off-piste and learn more about the individuals involved, and how their time and location shaped the discovery. The journey is a way to keep in touch with history and appreciate just how far humanity has come (and, particularly when it comes to minorities or women in science, just how far we still need to go).

And there is still more to see. Strontian, Scotland remains unexplored; the pitch drop at the University of Queensland unwitnessed; Magnesia, a curling hook of land on the coast of Greece, unvisited. Sites in South and Central America, Africa and the Steppes of Asia cry out for their chemical heritage to be acknowledged. Science is a world ripe with adventure – and its treasures are there to be seen.