When it comes to science, James Bond is an idiot. You might think, after 63 years in the sneaky espionage business, the world’s most famous fictional spy and casual misogynist would have got a few things straight. And yet, since his inception by Ian Fleming, many of the basic chemical concepts associated with the character are hopelessly wrong. Obviously there’s only so much time you can spend sniffing the vapours while breaking in to a volcanic lair, or pondering whether your invisible car can drive into an ice palace, before you lose your grip on reality.

There are four iconic things about 007: the catchphrase (‘Bond, James Bond’) and the Aston Martin are untouchable. But chemists can easily point to the errors inherent in his favourite drink. The vodka martini, infamously, is supposed to be stirred, not shaken; James Bond is just ordering a weakened cocktail which, given the sheer amount of booze he guzzles, is probably a small mercy on his liver.

But did you know the chemical sciences influenced the final iconic point about Bond: his signature handgun? 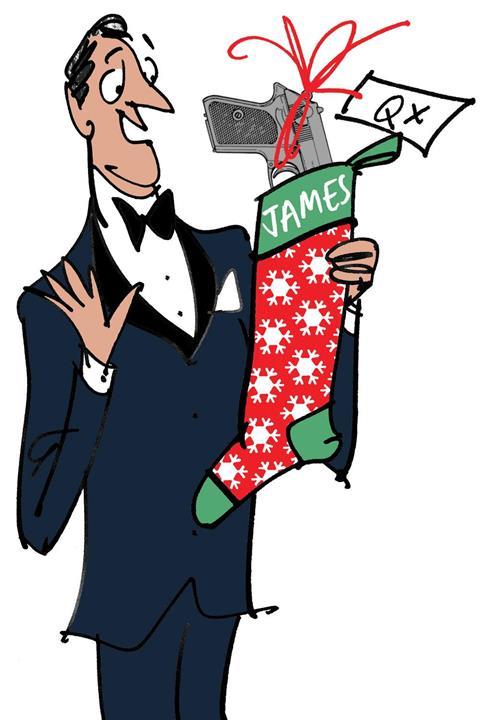 In the first five novels (and the start of the first film, Dr No), Bond relies on his trusty Beretta 418. Small, lightweight and firing a .25 slug, the ‘pocket pistol’ was ideal for a spy given its size: the entire gun could be concealed in the palm of the hand. Bond’s stated preference was to have a ‘skeleton grip’ – meaning it didn’t have any grip at all – kept in a chamois leather holster (as it doesn’t ruin the line of the jacket). This gets him in to trouble in the novel From Russia with love, as he can’t draw the gun to shoot Rosa Klebb and her bladed shoe: unlike the movie, she successfully kicks him. The novel ends with Bond struggling to breathe as tetrodotoxin courses through his bloodstream.

Bond survives, but the incident results in boss M demanding he gets a better gun and a better choice of holster. In comes Major Boothroyd, who offers Bond a Walther PPK and a Smith & Wesson Centennial. In the films the Smith & Wesson is forgotten about altogether, and Boothroyd becomes the famous gadget master Q.

Yet unlike the entirely fictional Q, Boothroyd was inspired by real life engineer and firearms expert Geoffrey Boothroyd, who was working for Imperial Chemical Industries (now part of AkzoNobel). Boothroyd had read Casino Royale and enjoyed it – so much so that he wrote to Fleming that he had ‘got rather fond of Mr James Bond’ except for his ‘rather deplorable taste in firearms’. ‘In particular,’ continued the engineer, ‘I dislike a man who comes into contact with all sorts of formidable people using a .25 Beretta. This sort of gun is really a lady’s gun, and not a really nice lady at that.’

Boothroyd then relayed to Fleming exactly what kind of gun Bond should be using. Fleming, appreciating the accurate information, began correspondence almost at once, enlisting the engineer for his technical expertise (including the best way to blow up a helicopter).

Boothroyd continued to help Fleming, which led to his own unlikely adventure. In the 1960s he furnished illustrator Richard Chopping with a gun to be painted for the cover of From Russia with love – only to find the police at his door. It turned out a similar weapon had been used in a triple murder in Glasgow. Able to show the police his gun was in London modelling for James Bond’s weapon of choice, the police shifted their attention and soon caught the real murderer, Peter Manuel. Manuel’s crimes were so sensational that actor Brian Cox used him to inspire his performance in Michael Mann’s 1986 film Manhunter. Thus a firearms engineer at a chemical company found himself linked to two of cinema’s greatest creations: the heroic James Bond and the villainous Hannibal Lecter.