Tattoos can be virtually any colour nowadays, but they are still tricky to remove

I wonder if Ötzi the Iceman, if he were alive today, would enjoy the minimalistic tattoos that are currently in fashion. Ötzi’s mummified body, found in the Alps in 1991, sported 61 tattoos, most of them small lines. The Chalcolithic man, who died around 3200BC, shows some of the earliest evidence of body modification. Although throughout history tattoos, piercings and other body modification often expressed belonging to a certain group or culture, the iceman’s marks were more likely an attempt at pain relief, much like acupuncture. 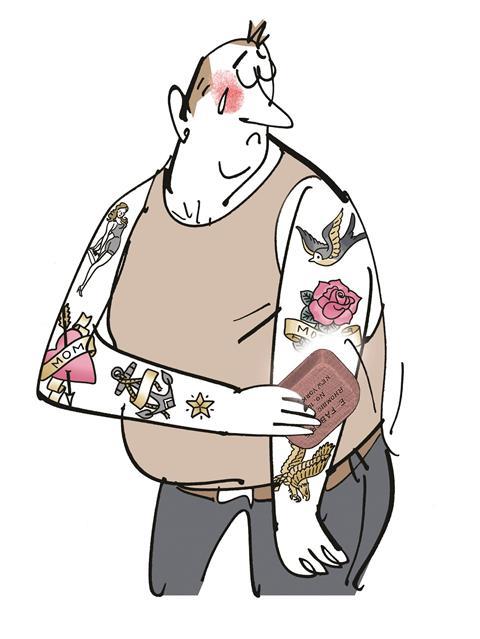 Ötzi’s tattoos were made from fireplace soot, and deep black carbon powder is still the most popular pigment. But modern tattoo aficionados have an incredible range of colours to choose from. Red, orange and yellow pigments are often organic azo compounds with extended aromatic systems, green and blue pigments are copper(II) chelated by modified porphyrins. There are even inks containing coumarin-type dyes that fluoresce under long-wave ultraviolet light while being almost invisible in ambient light.

For a tattoo to be permanent, the pigments need to be placed in the skin’s lower layer, the dermis. The outer layer is subject to constant cell renewal – a tattoo here wouldn’t last very long. But the dermis also harbours many nerve endings, responsible for our sense of touch and heat. Having it punctured by tiny needles up to 3000 times per minute, which is exactly what a tattoo machine does, is about as pleasant as it sounds.

Unlike other hypodermic needles, tattoo needles aren’t hollow. They work more like paintbrushes, consisting of an array of thin individual needles as the bristles. Thanks to the capillary effect, ink gets trapped between the needles and is drawn into the skin.

Once the ink is in the skin, specialised white blood cells called macrophages and tissue cells called fibroblasts soak up most of the pigments in an attempt to clean up the inflammation the foreign bodies are causing. The pigment-filled cells then stay suspended in the dermis, leaving the tattoo visible through the skin’s upper layers.

Historically, people had to resort to radical methods if they wanted to remove their tattoo: dermabrasion – essentially sanding down the skin until the ink-containing layer is gone – or cutting away the dermis. Luckily, with the advent of laser tattoo removal in the late 1980s, regretful tattoo owners have now a reliable removal method that leaves their skin intact.

During laser removal, the pigment particles absorb the laser’s energy, causing them to momentarily heat up and then shatter. The remaining tiny particles are then transported away by macrophages. The pigments’ selective destruction relies on their absorption spectrum being different from the surrounding tissue. This is why black ink is quite easy to remove but reflective pigments like white titanium dioxide are much more difficult.

With ever more people getting tattoos – and regretting it later – researchers have started looking into the issue of tattoo removal. A Canadian PhD researcher claims to work on a ‘bisphosphonate liposomal tattoo removal’ cream. It supposedly increases the number of macrophages in the dermis that help remove the pigments even in fully healed tattoos. And a group of medical researchers and biomedical engineers from the US has developed a microencapsulated pigment that is apparently cleared away with a single laser treatment.

But until chemists develop the tattoo equivalent of disappearing ink, getting a tattoo is still much easier than getting rid of it.