Dickens and the haunted chemist

‘As the gloom thickened behind him … Ghastly and cold, colourless in its leaden face and hands, …dressed in the gloomy shadow of his dress, it came into his terrible appearance of existence …motionless, without a sound’.

So Charles Dickens (1812–1870), whose bicentenary we celebrate this year, describes the first appearance of the phantom in his Christmas tale, A Haunted Man, written in 1848. And to whom does this spectre appear? A chemist, ‘upon a winter’s night, alone’. Our chemist is described as…

‘a learned man in chemistry…surrounded by his drugs, instruments and books among a crowd of quaint objects…glass vessels that held liquids…’ 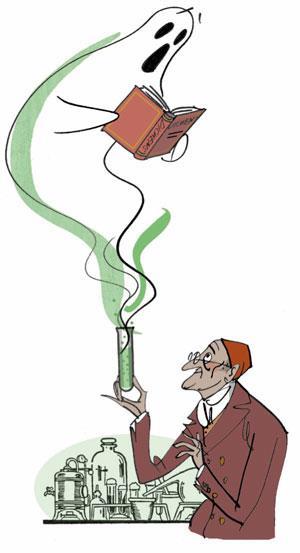 The ghost offers the chemist (called Redlaw) the gift of forgetting painful memories provided that he passes this gift to others. ‘The gift that I have given you, you shall give again, go where you will,’ explains the ghost. Redlaw accepts, sometimes to ill effect, but the story does have a happy ending, in true Dickensian Christmas style. This curious tale contains elements of comedy as well as of pathos and mystery.

The novella is the last of the five Christmas Tales which Dickens wrote, of which A Christmas Carol is deservedly the most famous. But the haunting of our chemist friend Redlaw is far from being the only allusion which the novelist makes to chemistry.

In a novel written almost 20 years later, Our Mutual Friend (1864–5), a sub-plot early in the novel concerns the Veneerings, social climbers who hold dinner parties in their palatial London home. Throughout the scenes involving them, the curious figure of a retainer likened to a gloomy analytical chemist flits (he is sometimes referred to simply as ‘the Analytical’; interestingly in all his references to chemists, Dickens uses a capital C).

The Analytical is a retainer who opens the doors to guests and serves champagne and wine at dinner at various points in the first part of the book. He is sometimes said to be ‘ghostly’, and in a certain sense acts as a sort of reproving Greek chorus to the action, though he is given little dialogue. There are other of his novels, too, in which Dickens alludes to chemists or scientists, but it is Redlaw and the Analytical who are more deeply explored.

Dickens was clearly interested in chemistry as more than a plot device. In 1850, he and Michael Faraday corresponded, and Dickens asked Faraday whether he could adapt the latter’s Christmas lectures of 1848, Chemical History of a Candle, for his weekly journal Household Words. Though it is not clear whether he ever attended any of the celebrated lectures at the Royal Institution.

Dickens wrote to Faraday that ‘it occurred to me that it would be extremely beneficial to a large class of the public to have some account of your late lectures on the breakfast-table…and (for) children.’ Faraday agreed, and an adaptation by Dickens’ friend Percival Leigh appeared as Chemistry of a Candle in the first volume of Household Words for 1850. That volume contains other allusions to chemistry (for example one on Alchemy and Gunpowder) and later issues of Household Words have other articles involving chemistry such as The Chemistry of a Teakettle. But it is The Haunted Man which best captures the author’s fascination with the subject.

A suitable tale for this festive month, and an unusual alternative to A Christmas Carol.