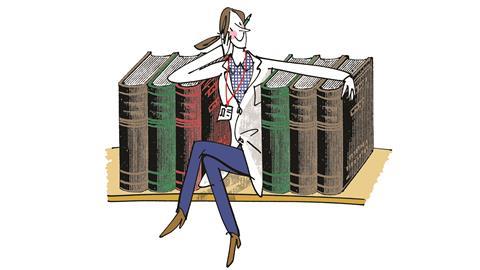 Taking your place on the shelf

The bonds formed in a fledgling research group

If an academic research group is a family, an academic’s bookshelf is the family album. Walk into any office and you’ll be confronted with shelves of leather bound theses, each smartly embossed with a gold lettering – a physical timeline of a research group’s story. Not every member of the research family is recorded: the work of postdocs, technicians and undergraduate project students may slip in and out between these tomes. But each of us occupies our own position, and our experiences are uniquely shaped by it.

From the outside, it looks like a carefully curated collection: a supervisor directing a number of postdocs, themselves mentoring their postgraduate charges who in turn guide the project students. Projects build on previous successes. Publications in quality journals appear regularly. But, as with any family portrait, the truth is somewhat different – especially in a group’s infancy.

‘Where’s Kristy?’ would be met with ‘running IRs’. We were fairly confident that the boss didn’t actually know where the IR lab was

My thesis sits at position number eight on my supervisor’s shelf. I was the first ‘incomer’ PhD student, having not done my undergraduate degree at the University of Glasgow. Having come from a more informal institution, I was quite surprised to hear my fellow researchers calling our leader by his title – it felt a bit like going back to school. Calling him by his first name was uncomfortable, so he ended up as (and remains) ‘the Boss’.

As I arrived in the lab, the very first PhD students were just leaving; indeed, it wasn’t much before then that the Boss had stopped running experiments in the lab himself. He used to appear two or three times a day, apple in hand, to catch up with our results. Unfortunately, the department only had one decent NMR, and results were often not there when he arrived. Soon, the phrase ‘have you got that NMR yet?’ became something we dreaded – and we began to devise increasingly creative ways to dodge it. One of us found that a tea break, taken in a particular spot at the side of the vending machine, gave good cover from the Boss’ line of sight as he walked down to the lab. Another favourite, disguised by a veil of legitimacy, was getting characterisation data: ‘Where’s Kristy?’ would be met with ‘running IRs’. We were fairly confident that the Boss didn’t actually know where the IR lab was, and in those days KBr discs could be fragile and unreliable – a quick ‘trip’ could buy you a couple of hours while the NMR queue thinned.

He was obviously still drunk the next morning, so we hid him under a desk in the office then stuffed him full of pasties

We also began to rebel a little. For the first few months of my PhD, the lab was a curiously silent place save for the hum of fume cupboards and rotary evaporators. There was no radio to provide a soundtrack to the day and the Boss was dead against it. We kept chipping away at his resolve and – when that didn’t work – ended up sneaking in my old hi-fi (complete with tape deck) while he was away.

Other family roles began to emerge. Each year, a third year PhD student took on the role of ‘lab mother’ – the person who made sure we never ran out of parafilm or DCM, and organised cards, presents and socials for departing researchers. Postdocs would come and go as funding was secured, like visiting aunts or uncles, each with their own quirks. One was practically nocturnal, arriving in the early evening and working all night; another had a penchant for sitting through group meetings in his cycling gear, coupled with an inability to recognise when he was pushing people too far – a trait that, for a time, led to either stand up rows or PhD students sloping off in tears.

As group siblings, we were fiercely protective of one another. When one of us had a few too many sherbets at a leaving do and was obviously still drunk the next morning, we hid him under a desk in the office when the Boss did his rounds then stuffed him full of Gregg’s pasties and sent him to run IRs. When the whole research group moved cities, we shared vans and did each other’s decorating. And when our French postdoc was robbed and needed somewhere to stay, I put them up in my spare room for a couple of weeks, dusting off my A-level French to spend my evenings explaining the background of various English sitcoms.

All those shared experiences in such a small and intense environment mean the ties that bind us from that time are strong. They have held fast, despite moves across continents, marriages, children, divorces and career changes. Looking at the Boss’s group now, they all seem so professional compared with us. They will never know the days of heading down to the back shed to hand pump solvents out of drums into Winchesters; pressing sodium for the stills (it seems dry solvents are just bought these days); or safety training that consisted of attacking ether fires with an extinguisher in the car park.

Perhaps their experiences are richer. Or perhaps it merely seems that way, and they’ll look back on their place in the group family with the same feeling that they were, at times, just shambling through. Regardless, their stories will take their place on the shelf. Welcome to the family.

Editor: Kristy Turner did her PhD with David Procter. He told Chemistry World he doesn’t want to know where the IR lab is located.