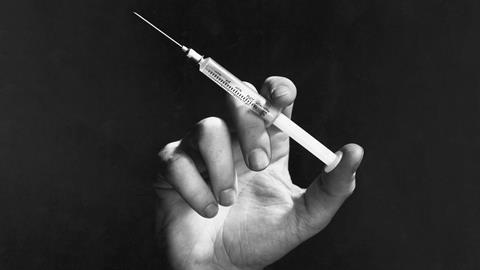 While difficult to detect, careful forensic examination can reveal when insulin has been used in a murder

Thirty-five years after the first human received an injection containing insulin came the first documented case of this miracle drug as a murder weapon.1 However, the villainous role insulin played in this case was almost overlooked. When Elizabeth Barlow was found submerged in her bath by her husband Kenneth Barlow on a May 1957 evening in Yorkshire, UK, it presented as a possible accidental drowning.

Kenneth recounted that his ill, eight weeks pregnant wife had sought the comfort of a bath but slipped into death instead. A 1958 report of Elizabeth’s death published in the British Medical Journal (BMJ) by V J Birkinshaw and colleagues describes her position in the bath as ‘one associated with natural sleep’ and that ‘[t]here were no obvious signs of violence’.2 A postmortem exam confirmed drowning, but questions remained. Birkinshaw and colleagues articulated the remaining conundrums expertly: ‘it seemed difficult to explain why a healthy young woman should have drowned in her bath without any apparent signs of reaction to inhaled water; she lay as though asleep with no evidence of splashing or violence’. Why didn’t the human physiological responses that fight drowning kick-in and manifest in physical findings of distress?

The conclusion was she was not merely asleep, but unconscious. Kenneth stated Elizabeth had been sweating profusely and vomiting prior to her bath, with ‘the gross dilation of pupils’ noted postmortem. These signs suggested Elizabeth was hypoglycemic, with a dangerously low blood sugar level possibly rendering her insensate. But no additional evidence was found to support this condition. Analysing specimens collected postmortem for ‘several hundred poisons and drugs’ found ‘nothing abnormal’, seeming ruling out a toxicological explanation to Elizabeth’s unconsciousness. Then, five days after Elizabeth’s death, the cause of her unconsciousness came to light. Literally.

A re-examination of Elizabeth’s body under better lighting conditions found two hypodermic injection marks in each buttock. Excised tissue underlying these marks contained insulin. This, according to Birkinshaw and colleagues, was the first murder case ‘in which insulin has been demonstrated in human tissue’.

The presence of insulin, a naturally occurring hormone that plays a pivotal role in glucose metabolism, does not automatically equate to murder most foul.3 Elevated insulin levels could indicate a medical condition (such as hyperinsulinemia) rather than a crime. Though there have been significant advances in analytical chemistry and toxicology since the 1950s, proving malicious insulin use continues to be difficult – as highlighted by the title of a 2020 review article by Charline Bottinelli and co-workers, which inquired: ‘Is insulin intoxication still the perfect crime?’4

While a second examination in the Barlow case revealed injection marks, if this and other indicators of insulin involvement are missed, then in-depth examinations are unlikely and intentional insulin poisoning can go undetected. Fortunately, specialists carefully evaluated the tissue below the injection marks in the Barlow case, and found that ‘the uneven distribution’ of insulin among the tissue samples ‘indicated that its presence was not the result of endogenous secretion’. Exogenous insulin, insulin not made by the body but introduced into it, became a distinct possibility.

Kenneth, a trained nurse, denied injecting his wife with insulin. He claimed the injections were of ergometrine maleate, an equimolar preparation of maleic acid and ergometrine used to induce and manage labour. Kenneth claimed he and Elizabeth collaborated on this course of action to terminate her pregnancy. No ergometrine maleate was detected in urine or buttock tissue samples and ‘[t]he actions of this drug do not explain the signs and symptoms found in this case’. Kenneth was convicted of murder and sentenced to life imprisonment.

Barlow was the first documented case, but it was far from the last. The 2007 book Insulin Murders by Vincent Marks and Caroline Richmond details suspicious insulin incidents that span the globe, including the high profile 1980s trial of Claus von Bülow for the attempted murder of his wife, Sunny von Bülow, in Rhode Island, US.5 Claus was convicted, subsequently saw this conviction overturned on appeal, and then was acquitted after a second trial. A bestselling book and Oscar-winning movie, both titled Reversal of Fortune, documents the twists and turns of the case.

In the years since the Barlow and von Bülow cases, additional biochemical markers have come to be evaluated to help reveal insulin poisoning. For example, C-peptide and insulin are naturally produced by the body in a 1:1 ratio. High insulin levels accompanied by low C-peptide levels points to added insulin from outside the body’s production pathway. As Bottinelli and co-workers write in their review, ‘progress in techniques is making the “perfect crime” ever more difficult to commit by means of insulin’.