2015 went out with a bang in terms of mergers 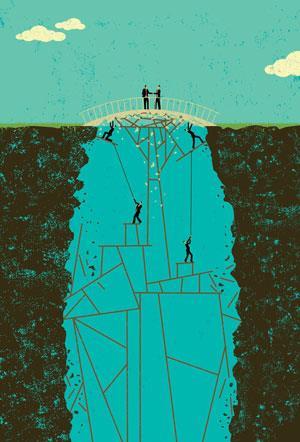 2015 went out with a bang in terms of mergers. Drug giants Pfizer and Allergan are set to unite and settle in low-tax Ireland, while chemicals behemoths Dow and DuPont have arranged a brief affair followed by a messy divorce.

Almost every time a large merger like this is agreed, investment bankers, shareholders and company executives slap each other on the back and celebrate, while the general staff of the companies watch with apprehension to see where the axe will fall. And it will fall. The point of these mergers is to satisfy investors, whose eyes are drawn to short term gains like cost reductions and ‘synergies’ – often delivered by closing facilities and ‘right-sizing’ the workforce through redundancies.

But something that’s often glossed over in the aftermath of a mega-merger is whether those savings actually materialise, and at what cost to the future success of the businesses. Even if bottom-line savings appear on paper, it’s not always clear that they will persist, or have been achieved in a way that actually benefits the firm’s operations.

In 2004, consultancy firm McKinsey analysed data from 160 mergers in which it had assisted in integrating the companies. Less than a third of those deals achieved 90% the advertised revenue synergies, with almost the same number failing to deliver even half of what was promised. Most of this discrepancy is attributed to overly optimistic estimates of what is possible, and underestimating the effects of the inevitable disruption to working practices.

Former president of R&D at Pfizer, John LaMattina, has vocally criticised pharmaceutical mega-merger deals for destroying R&D productivity and diversity. The wave of consolidation in pharma has drastically reduced the number of R&D departments working on new drugs. The knock-on effect on research diversity is hard to quantify, but companies have a tendency to cultivate a certain approach to R&D, so having fewer firms looking at any problem could be expected to narrow the breadth of exploration. And yet, the deals keep coming.

The thing that most strikes me about the Dow–DuPont merger is how vociferously both were arguing against suggestions from investors that they should split into more specialised companies only a few months ago. Such a plan apparently showed a ‘fundamental lack of understanding’ of how the chemicals industry works, and the benefits of running integrated operations. Have those benefits suddenly evaporated? Or has the need to relieve shareholder pressure finally tipped the balance?