The instrument that transformed our understanding of atoms 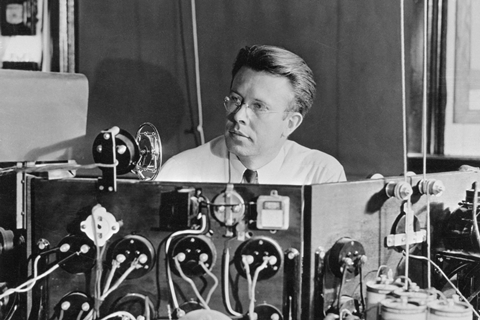 Source: © 2010 The Regents of the University of California, Lawrence Berkeley National Laboratory

In a way, the nautilus is a metaphor for one of the greatest scientific inventions of the 20th century: the cyclotron. The idea behind such particle accelerators started with Ernest Rutherford using alpha particles emitted by radium to discover the atomic nucleus and to split nitrogen atoms. But by 1927 it was obvious that the energy of these particles wasn’t high enough for his needs, and he yearned for ‘a copious supply of atoms and electrons which have an individual energy far transcending that of the alpha- and beta-particles from radioactive bodies’. His colleagues were soon on the case.

Perhaps all that was needed to accelerate charged particles was a big voltage. In Cambridge, UK, John Cockcroft and Ernest Walton designed an elaborate voltage multiplier, a massive array of capacitors linked by electronic rectifiers, that could fire protons at 800keV down a vacuum tube. In the US, Robert van de Graaf used a moving conveyor belt to transfer charge onto a spherical insulator (Chemistry World, October 2011, p70), achieving even higher voltages.

Unknown to either group, the physicist Gustav Ising imagined something different. What if charged particles could be accelerated successively by a series of nudges? The Norwegian PhD student Rolf Wideröe built a prototype inspired by Ising’s idea. He lined up three alternating tubular electrodes in a vacuum tube, with a target at the far end. Particles moving through the first tube would be accelerated into the second; the potentials of the electrodes were then switched so that the particles were again accelerated into the third tube. It was the first linear accelerator, and could accelerate sodium and potassium ions to 50keV. If the beauty of the design was that you didn’t need a big voltage , the rub was that the ultimate energy of your particles depended on the length of your laboratory.

Wideröe’s paper caught the eye of Ernest Lawrence, a lecturer at the then almost unknown Berkeley campus in California, who had established the kinetics of the photoelectric effect with Jesse Beams (Chemistry World, February 2016, p39). To build his own accelerator, Lawrence hired David Sloan, a physicist from the General Electric Research Laboratory in New York. Lawrence’s idea was quite different: if charged particles move in a magnetic field, they are deflected into an orbit. The frequency of the orbits would be independent of the energy of the particles; only the radius would change. Hence an accelerated particle would follow a spiral path ­­inside the device and could be squirted out like the water propelling a nautilus. 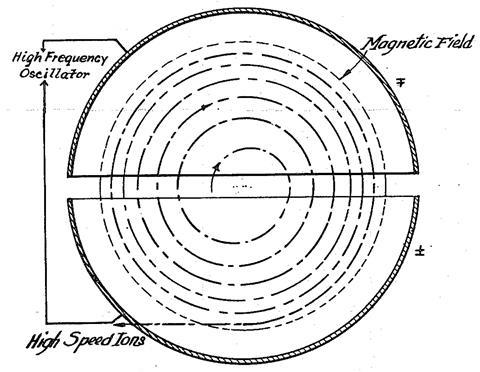 Figure from the 1930 cyclotron patent, showing the spiral path the charged particles take

After initial experiments showed promise,1 Lawrence set Stanley Livingston onto the problem. The result was a single hollow, D-shaped electrode sandwiched between the poles of a four-inch electromagnet. This repeatedly pulled orbiting H2+ molecules into the D, and then, after flipping the potential, pushed them out as they emerged. Using a 160V supply, energies of 13keV could be obtained after 40 orbits.2

After initial experiments showed promise, Lawrence set Stanley Livingston onto the problem. The result was a single hollow, D-shaped electrode sandwiched between the poles of a four-inch electromagnet. This repeatedly pulled orbiting H2+ molecules into the D, and then, after flipping the potential, pushed them out as they emerged. Using a 160V supply, energies of 13keV could be obtained after 40 orbits.

This thumbnail description completely overlooks the ferocious intensity of the work: 70 hour weeks were the bare minimum. Endless hours were spent machining, welding and testing components, building vacuum pumps and designing electronic control equipment from scratch; this on top of doing physics. With Lawrence aiming to reach energies of 1MeV, Livingston began to build an 11-inch instrument, now with a pair of Ds between which the potential oscillated back and forth to drive the particles to higher speed.

Just as Lawrence and Livingston prepared for their first real nuclear experiments, Cockcroft and Walton announced that they had split lithium. This spurred Lawrence to expand his team, which repeated the British pair’s work using a tabletop device that had cost only a few hundred dollars. As the team pushed into the unknown of nuclear science the instruments steadily scaled up, eventually reaching a monstrous 184 inches and 100MeV. 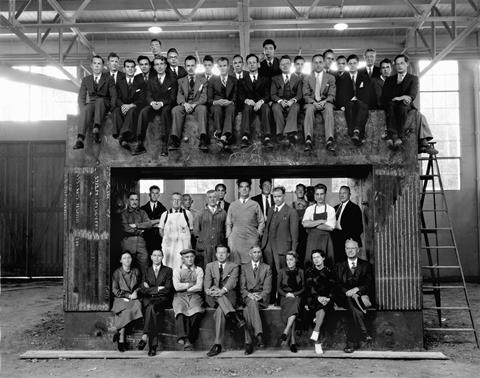 Source: © 2010 The Regents of the University of California, Lawrence Berkeley National Laboratory

Cyclotrons are now the workhorses of nuclear medicine, producing isotopes and beams for imaging and radiotherapy. They have also been key for producing new elements; cyclotrons were used to synthesise the transuranics, filling a key hole in the periodic table, and Emilio Segré discovered technetium in a sample of molybdenum from the Lawrence lab (carbon-14 samples from the lab were also vital for Melvin Calvin and Andrew Benson’s tracing of the biochemistry of photosynthesis).

Today Lawrence is remembered as one of the fathers of ‘big science’. Yet his work began with a scientific ammonite that could almost be held in the palm of one hand. From that device myriad ideas would spiral outwards, spinning off multiple scientific revolutions.

I am grateful to Stephen D Price, Jon Butterworth and Suzy Sheehy for advice and corrections.