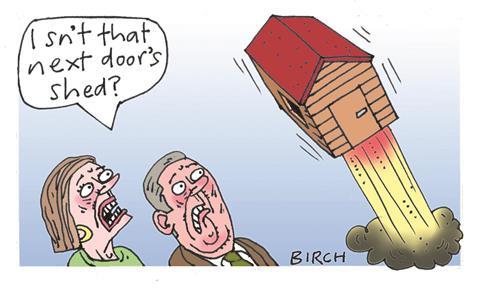 The article on hobby chemistry (Chemistry World, December 2016, p20) brought back many memories. As a teenager in the mid-1960s, I built a chemistry laboratory in a summerhouse in our garden. The local pharmacist happily sold me concentrated acids in 100ml bottles (with suitable warnings). My father, a teacher at the local school, asked his chemistry colleagues for advice. They also kindly gave us the address of a Glasgow laboratory furnishers, who would sell us almost anything subject to a letter from my father accepting responsibility.

My father was advised by his colleagues that I should not have a number of substances, including bromine. I decided that, if I couldn’t buy it, I’d make it. The textbook diagram for producing bromine looked easy, with the bromine condensing from a glass retort into a receiver; the reality was it entered the receiver and came straight back out. My mother watched as I evacuated the summerhouse with brown fumes pouring out of the windows. The curtains were never the same colour again! A note to parents of teenagers: perhaps don’t try this at home.
JA Berry CSci CChem FRSC
Chilton, UK

Sarah Houlton’s article on hobby chemistry revived memories of my own path to the science. However, I thought it failed to highlight the plight of those who still need to resort to DIY chemistry in the course of self-employment. A few years ago, I received a visit from two plain-clothed officers enquiring as to ‘why you have been purchasing chemicals from a certain auction website’. After showing them my RSC membership card and explaining the situation, they went away fairly happy. I have often wondered if it would be possible for the RSC to compile a register of those who may need to work with chemicals from home.
AJ Gilfillan MRSC
Lincoln, UK

The final paragraph of Clare Sansom’s article ‘Separating the guilty and the innocent’ (Chemistry World, November 2016, p52) is somewhat misleading. While it is true there was an upsurge of forensic science degree courses about 20 years ago, following various TV programmes, it is unclear if this is supported in the more recent past in terms of new degree courses and student numbers.

What we can say with absolute certainty is that pure chemistry degree courses are not in decline: in fact, the reverse is true. Recently there have been new chemistry departments opening at universities which recognise the benefit of pure chemistry specialists and their interaction with other disciplines. Departments that were shut at the turn of the century are now reopening. Student numbers in chemistry continue to go from strength to strength, predominantly due to the career prospects on completion. Since 2005, the number of new chemistry enrolees has risen by around 25% throughout the UK, as students and future employers see that skills learnt during these courses can be transferred not only to chemical science but many other disciplines – including forensics. The state of chemistry courses in the UK is in excellent health and continues to grow.
Jason Lynam, FRSC
chair, RSC committee for accreditation and validation

Currently there are significant plans to increase the production of electrically powered vehicles. Where, however, does the electricity required come from? This extra electricity can be estimated relatively simply. Government statistics list the annual mileage covered by motor vehicles in the UK. By assuming a reasonable average fuel consumption rate, it is possible to calculate the total energy used by employing combustion. Electric engines are significantly more efficient than internal combustion engines. Assuming that the total electrical energy needed is only 40% of that combustion energy, a conservative estimate would put the additional demand at around 60% of the current electricity capacity of the UK. I wonder if the Government has taken this into account in their future plans.
Roger Newman CChem MRSC
Dursley, UK

Alice Gray’s recent comment on the gender balance of Nobel laureates worries me (Chemistry World, December 2016, p8). I write as an unapologetic admirer of the late Dorothy Hodgkin who showed, in my lifetime, that some women can excel at science. Why should one pre-suppose that there ought to be gender balance in the Nobel prizes? Surely the rules laid down by the donor are sufficient. The decisions made on the science prizes over more than 100 years have been integral to the acknowledged status of the Nobel laureates, even if the committee once contrived not to make an award to Dmitri Mendeleev.
Sam Logan CChem FRSC
Portstewart, UK

I read with interest R Craft’s recent letter on solvated electrons (Chemistry World, December 2016, p6). The hydrated electron reacts at diffusion controlled rates with acetone and hydrogen peroxide. Electrons solvated in polar liquids have very short natural lifetimes (milliseconds or less). If one could observe them with the naked eye, these solutions would look blue – as is the case when electrons are trapped in glassy frozen polar media but do not emit blue light. It is very unlikely, therefore, that the ‘intense blue flash lasting a few seconds’ reported could have been due to solvated electrons.
George Buxton CChem FRSC
Leeds, UK