Power to the people

Drive 20 minutes from the city of Sparks, Nevada, US, down to the end of Electric Avenue, and you will find one of the world’s largest buildings taking shape. Welcome to the Gigafactory.

By 2020, this $5 billion (£3.48 billion) behemoth will churn out as many lithium-ion batteries as the rest of the world combined. Currently 15% complete, the building will eventually cover more than half a million square metres of desert, employ about 6500 people and run entirely on renewable energy. The factory is owned by electric vehicle maker Tesla, and when its first batteries emerge next year, many will end up in the company’s new Model 3 car. 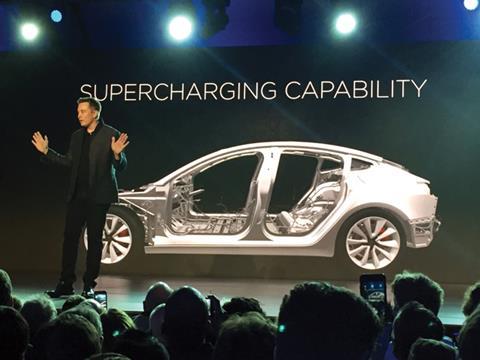 Tesla’s first car, the Roadster, launched in 2008 with a luxury price tag of $109,000. Its successor, the Model S, came in at about half that cost and was the best-selling plug-in electric vehicle last year. But some commentators predict that it is the Model 3 – priced at just $35,000 – that will truly revolutionise the motor industry.

Eager customers could take delivery of the first Model 3s by the end of next year, and 400,000 people have already ordered one. At the beginning of May, Tesla’s CEO Elon Musk said that the company was accelerating its production schedule. It now aims to build half a million electric cars in 2018, and close to a million in 2020.

The benefits could be enormous. In principle, greater use of electric vehicles means that more renewable energy can be used for transportation, reducing local air pollution and helping to curb greenhouse gas emissions. In the past, though, some researchers have argued that lithium-ion batteries would never be cheap enough, or store enough energy, for large-scale deployment in electric vehicles. So is Musk about to prove them wrong?

As the lightest metal, lithium already offers a big advantage for batteries in mobile and transport applications. But lithium-ion batteries have also seen major progress since coming to market in 1991: a 10-fold decrease in cost, along with a three-fold increase in energy density. They now store about 250 watt-hours per kilogram (Wh/kg), and there is still room for improvement.

But the battery electrodes’ capacity for lithium, and the ion’s single charge, place limits on future performance gains. Conventional wisdom says that in order to rival the range of petrol-driven cars, we need batteries with capacities of at least 400Wh/kg – and that demands something beyond lithium-ion chemistry.

Tesla has tackled the range problem by simply loading more batteries into their vehicles. The Model 3 should be able to cover more than 300km on a single charge. Still, it takes several hundred dollars worth of lithium-ion batteries to carry 1kWh of energy, and battery packs can account for about one-third of an electric car’s price.

Enter the Gigafactory. Although its batteries will be standard Panasonic units, the real innovation lies in the facility itself. By putting the whole manufacturing cycle under one roof and ramping up production to unprecedented levels, Tesla predicts that economies of scale will help to depress battery costs by about 30% and significantly boost sales.

Nevertheless, Tesla’s output will only make up a tiny fraction of the world’s annual production of 68 million passenger cars. By those numbers, the Model 3 will not be transformative – at least, not in the way that the lithium-ion-powered cell phone has been.

To have a worthwhile impact on carbon dioxide emissions, you need a low-cost battery that can run half the world’s passenger cars better than petrol. There are a plethora of alternative rechargeable battery chemistries in development that might fit the bill, including sodium-ion, lithium–air and lithium–sulfur. Arguably the best candidate is lithium–sulfur: weight for weight, it has the potential to store about five times as much energy as lithium-ion, although its performance tends to decline after a few hundred charging cycles.

Some fear that if the motor industry goes all-in for lithium-ion batteries, it might become more difficult for better batteries to displace the incumbent technology in the future. While this sort of technological ‘lock in’ is a possibility, a massive roll out of lithium-ion battery cars will help to boost the electric vehicle market and could actually accelerate the development of alternatives.

There are already pockets of success. In Norway, one in three new passenger cars are plug-in electric vehicles, all recharged by the country’s hydroelectric power plants. If Tesla can help battery-electric vehicles to reach even 5% of the global fleet, it could boost consumer interest, spur other manufacturers to invest in the technology, and other Gigafactories would follow. A recent industry analysis suggests that mines could meet the resulting surge in lithium demand.

Reports about the Gigafactory are often tinged with optimism, fuelled in part by Musk’s soaring ambition and his impressive track record at his other companies (PayPal, SolarCity and SpaceX). Just like Apple’s Steve Jobs, he has masterfully stoked anticipation for each of Tesla’s milestones. But that is itself a remarkable turnaround for an industry that for too long scoffed at the idea of mass-market battery-electric vehicles.

It is far from certain that Tesla will stick to its timetable – it has certainly missed deadlines before. But I for one would not bet against Musk’s Gigafactory, or the cars that will carry its batteries.

Thanks to George Crabtree, director of the US Joint Center for Energy Storage Research, for helpful discussions.