Your views on the Skripal poisoning, patents before publication and Switzerland’s pesticide referendum

Catch up on catalysis 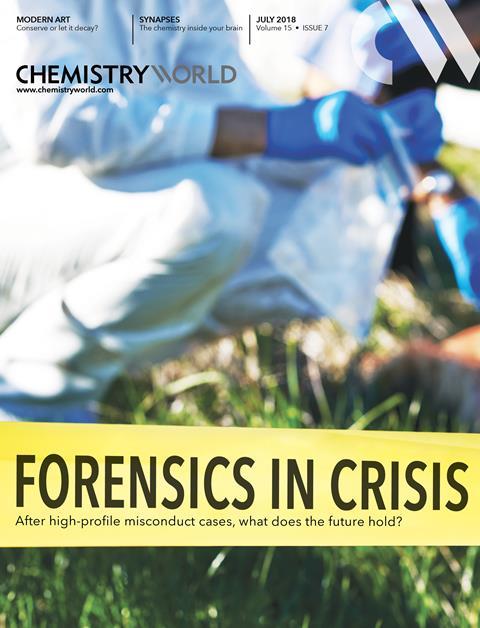 While I enjoyed the article on combining homogeneous and heterogeneous catalysts, I was disappointed by its final paragraphs. (Chemistry World, May 2018, p48). The article discusses Gabor Somoraji’s efforts to heterogenise enzymes as if this is a new thing.

When I started grad school in the 1980s, Lemuel Wingard Jr gave me multiple books he had edited on the subject of enzyme immobilisation, which had been going on since the 1960s. One of the most beneficial uses of these hybrid catalyst systems is in glucose monitors for diabetes, which are based on immobilised glucose oxidase, along with an immobilised peroxidase or other enzyme to generate a measurable response.

While immobilised enzymes are definitely hybrid catalysts for the future, they are not new; the inorganic catalyst researchers are just now starting to catch up.

John Newbery has clearly not visited Salisbury recently (Chemistry World, June 2018, p4). Were he to do so, he would find that key locations involved in the Skripal poisoning are still cordoned off for decontamination. Both the complexity of the decontamination challenge and the need to preserve evidence at a crime scene would indicate the Organisation for the Prohibition of Chemical Weapons (OPCW) had ample opportunity to acquire its own samples, and not simply review the UK Defence Science and Technology Laboratory methods as he suggests. This is confirmed by the OPCW itself, which stated in its report that: ’The OPCW team worked independently and is not involved in the national investigation by the UK authorities. No State Party was involved in the technical work carried out by the [OPCW] technical secretariat.’

The answer to the ‘on the spot’ in the June issue highlighted the importance of publishing in the best journal for the work (Chemistry World, June 2018, p65). I was wondering whether the answer should have stressed the importance of checking the patentability of any discovery, too. Filing a patent will not prevent publication; however, publication will prevent the ability to obtain a patent!

Some patents have been very valuable, such as the pioneering work by John Goodenough on lithium–ion batteries. Similarly, early work on recombinant DNA by Stanley Cohen and Herbert Boyer was patented. In contrast, early work on monoclonal antibodies by César Milstein and colleagues was not; how much royalty income may have been lost from the absence of a key patent in an important area is debatable.

The referendum to ban pesticides in Switzerland (Chemistry World, June 2018, p7) makes me wonder if the Swiss are self-sufficient in food. Having worked for many years with organic foods, where pesticides are not allowed in their production but can still be found via accidental contamination, the Swiss may find it difficult to obtain sufficient pesticide-free imports. Pesticides are so ubiquitous in the environment they have even reached the Arctic, so even food grown in Switzerland may not be completely pesticide-free.

I have also found that analytical methods used to detect pesticides by contract testing laboratories are a cause for concern. There are too many examples of different quantitative and qualitative results, even within the same laboratory group. I wonder if accuracy has been sacrificed for speed.

Last month’s editorial stated Frankenstein was published 150 years ago (Chemistry World, June 2018, p1). The novel was originally published in 1818, and is currently marking its 200th anniversary.

Best of the web

Chemists were quick to confess on Twitter the ‘smallest, most self-admittedly pathetic point of principle’ that they weren’t willing to back down on when it came to chemistry. The answers raised common complaints as well as some more niche gripes…

Never cm/s always cm s-1 – even Twitter will not allow me superscript.

Possibly more of a physics beef: incorrect use of the term weight when they really mean mass. My personal trainer looks at me funny when I ask him the mass of some of the plates on the bar…

CVs where they’ve reversed the axis so the top right quadrant holds the interesting bit are really annoying and unnecessary. We all know how to understand a graph.

Chiral pool. The pool itself is not chiral. Should be the pool of chiral starting materials.

All the obviously wrong nomenclature of 2D metal chalcogenides. Their phases are named in relation to the bulk space group, which indicates how layered materials stack and make no sense in the single layer limit. I suggest, for example, molybdenene (from molybdenite) instead of 1H MoS2