I was interested to read Harry Kroto’s account of graphite losing its lubricating properties in a vacuum (Chemistry World, November 2010, p37).

When I was working for Morganite Carbon in the early 1960s I saw a demonstration of an electric motor running inside a bell jar. When pressure was progressively reduced there suddenly came a point when the carbon motor brushes rapidly disintegrated.

Our Fundamental Research unit showed that the lubricating properties of graphite were not due to the sliding of layers, but they rolled up to form minute roller bearings. This did not happen in the absence of intercalated oxygen or water molecules.

The carbon brushes that we supplied for high flying aircraft incorporated molybdenum disulfide, which has a structure very similar to that of graphite but does not lose its lubricating properties at low pressure.

I was delighted to note the re-invigoration of the phlogiston theory in The Guardian  newspaper’s Weekend  supplement (30 October 2010, p85). The use of muriatic acid was recommended for cleaning plaster from bricks. Fortunately, a late 1950s education in chemistry allows me to translate this into concentrated hydrochloric acid (’builder’s acid’) for the benefit of my friends in the trade. I presume we may next read of the use of dephlogisticated muriatic acid for the disinfection of swimming pools.

I read with interest the items in the November issue of Chemistry World  on the extension of the periodic table to element 172 (p25) and the supposed importance of element 137 (p35) .

I suppose that there will always be folk who will tinker with the periodic table in the same way that others tinker with the calendar. Mind you, the periodic table that Holmyard served up to us in ’A’ level chemistry in the 1950s was much in need of revision. Then every group from 1 to 7 had an A and B subgroup from period 4 onwards, with Group 1A being the alkali metals and 1B the shorter group of the coinage metals (Cu-Au); across to Group 7 A including the shorter manganese group (Mn-Re) and 7B the halogens. Group 8 which ought to have been the then inert gases was actually three groups headed by iron, cobalt and nickel.

My school chemistry master, the redoubtable but deaf Dr Stead, had been an artillery officer in the first world war and understandably was not up to speed by the mid 1950s.

My heady first days at Nottingham University, UK, under the tuition of Cliff Addison and Norman Greenwood (both soon to be professors) soon straightened us out with a periodic table based on main groups with filling ’s’ and ’p’ shells of electrons; the transition groups with the filling of the ’d’ shell and the lanthanides (and later actinides) filling the ’f’ shells. I gather this has been further refined to combine main and transitions groups into Groups 1 to 18; but as one long since retired I have yet to become accustomed to this improvement.

Another issue that intrigues me is the shape of g orbitals. p orbitals are one dimensional, d orbitals are 2D, and f orbitals have quite bizarre 3D shapes. Maybe g orbitals will be 4D, which would only make sense to wave mechanical chemists. Those of us who have taught this area to students know they like proper shapes to latch onto. 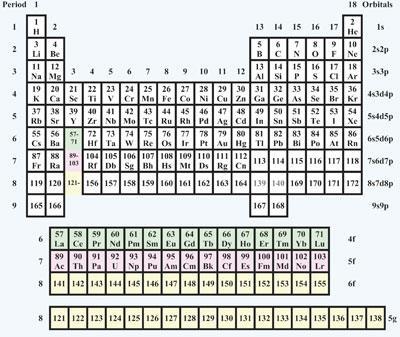 Would you tinker with the periodic table?

In my final year, 1960, we were told that element 102 (nobelium) had been proven to exist, all three atoms of it, with a half life measured in seconds! Now 50 years later we have got another 10 synthetic elements, all with improbably short half lives. I suppose because they are there to discover nuclear scientists will seek to synthesise new elements for ever and a day. I had divined that a theoretical region of stability was hoped for at element 118, the next noble gas after radon, but 137 and 172 now seem in the frame.

What I have not seen in the literature is reference to problems which the well known graph of nuclear stability ought to throw up. In this graph, atomic number, A, is plotted vertically and mass number, Z, is plotted horizontally. The graph slopes at a steady 45? to calcium (A=20) but the graph becomes more horizontal as the mass number rises to say 92 for uranium. If we use any combination of elements for acceleration and target material, surely we are going to be so neutron deficient that any thought of reasonable stability becomes more and more remote. But perhaps I am a simplistic retired chemist.

One does wonder at the expense of all this nuclear science, perhaps the Higgs boson is the ultimate prize, but that’s merely physics.

The brief piece about Sir George Porter (Chemistry World, November 2010, p78) took me back to the summer of 1977, when I was just finishing up as a graduate student in the School of Chemistry at the University of Leeds, UK.

It was widely known amongst staff and postgraduates that Porter had been an undergraduate at Leeds in the 1940s and there was still on the payroll one member of the technical staff with clear recollections of him. On an August afternoon in 1977, technical staff, who were clearing out a room which had become a repository for junk over a long period, found a laboratory attendance register from the 1940s. Entries in it were in fountain pen.

Observing the date of the register - circa 1943 - I suggested that we look for an entry for G Porter and after a couple of minutes’ search we found one!
I informed J H Robertson (1923-2003) of the discovery and he took steps to ensure that the register with Porter’s signature in it would be retained by the School for its historical interest. I expect that it is still at Leeds.

We are writing to you concerning a very recent event that is profoundly troubling for all scientific interactions, and significantly damages the good names of many eminent scientists. Specifically, the Nobel Symposium Committee had formally approved five months ago, in June 2010, Nobel Symposium Number 151 on ’Water in biology and medicine’. At that time, 22 international speakers were formally invited, their abstracts submitted, and a preliminary conference programme produced. On 5 November 2010, speakers were shocked to receive an email message from Michael Sohlman, chairman of the Nobel Symposium Committee and executive director of the Nobel Foundation, announcing the cancellation of the meeting, without giving any reason for this unprecedented action.

At no time prior to last Friday’s un-invitation letter did the Nobel Symposium Committee, or any of the scientific members of this committee, discuss their contemplated action with any member of the conference’s organising committee or with any of the invited speakers. From what we know of the behind the scenes motivations for the Nobel Symposium Committee’s decision, some very strange and questionable procedures have been adopted here.

Many apologies to Robin Stokes, whose letter about Frank Boys (Chemistry World, November 2010, p39) was mistakenly attributed to Fred Boys.