I am disappointed that the BBC did not find a chemist to present Chemistry: a volatile history

Like Pickard (Chemistry World, May 2010, p40), I am disappointed that the BBC did not find a chemist to present Chemistry: a volatile history, but I am not amazed that a physicist, Jim Al-Khalili, ’made an excellent job of it’. After all, chemistry is a physical science. The Royal Society of Chemistry (not of chemical sciences!) has a duty to reassess the ’chemical sciences’ enterprise, which has blurred the entity of chemistry (thereby perhaps confusing A-level students, their advisers and their parents) in order to save and promote chemistry before it is far too late.

It is galling to witness the perennial hand-wringing about chemistry’s public image while a useful remedy is being ignored. If children in primary schools were modelling molecules, and looking for the predicted substances in Google, they would be developing an interest in chemistry that has eluded many generations. I have taught 10-year-olds this way for years, and it works. Their ability to understand is continually underestimated, and tangible models make molecularity an item of basic science that is particularly accessible to them.

Knowing myself to be out of line with the thinking of primary science professionals, I suggested in 1995 that the RSC should sponsor a small-scale trial of the topic. I have now been asking for 15 years, writing to Council members and university departments, and appealing to the grass roots membership through letters in RSC journals. There has been no observable result.

This topic has too much to offer chemistry to be allowed to die through indifference and silence. It can provide secondary schools with the incalculable bonus of entrants who are already familiar with atoms and molecules and are (above all) interested in them. There is a closer description of the molecular science that 10-year-olds can manage at atoms.freehostia.com.

I feel sure there are readers of Chemistry World  who recognise the importance of early impressions on people’s later thinking, and who will feel instinctively that the teaching I am urging is at least worth a try.

Whenever I go into Blacks outdoor shop I always see their ’Technicals’ range of clothing. This range has a chemical structure as its logo [see picture] and I’ve always been perplexed by which compound it represents. I have asked various university lecturers, school chemistry teachers, technicians and even Blacks head office but no one is able to agree on what it is.

I wondered if the RSC and Chemistry World readers could shed any light on the issue.

I would think there are some assumptions to make such as double bonds on the benzene ring and other functional groups (which must have been omitted for design purposes).

I would be grateful for any ideas as to what it could represent.

Camouflage is not all about green and brown paint (Chemistry World, June 2010, p42), how right you are. Paint a vehicle in NATO green, made with ordinary paint pigments, hide it in a forest and take a photograph with an infrared sensitive device; the vehicle will stand out like a sore thumb. NATO green has to be made with pigments such as chromium oxide green, to match the infrared reflectance of the leaves. For other countries, including Australia, the infrared reflectance is different and so the paint has to be made specially to match.

In recent years technology has advanced and in turn advanced our understanding and communication in chemistry. The drawback to the recent advances is rote learning in schools. See, for example, Chemistry’s colossal fraud (Chemistry World, 25 March 2008), where Pattium Chiranjeevi had his students download data from the internet. With the vastness of knowledge and ready availability from internet devices, mental lethargy in our understanding of chemistry will occur. Instead of comprehension, one will rely on the devices used. 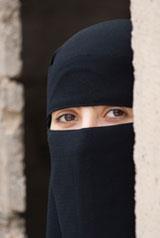 Norman Rose (Chemistry World, March 2010, p44) asked whether there is acceptable medical evidence for a higher incidence of hypovitaminosis D and related diseases among women who, for cultural, religious or other reasons, cover their bodies almost completely with clothing while outdoors.

There is indeed extensive evidence from investigations in several Middle Eastern countries, referenced in a recent study which showed that vitamin D deficiency is common in healthy adult Moroccan women even during the summer and that lack of sun exposure and veiled clothing are the main factors leading to this.1

Probably the earliest demonstration that veiling and purdah could lead to rickets was by H S Hutchinson in the early 1920s in Bombay, at a time when there was much debate about whether rickets was a result of poor hygiene or diet.2

Hutchinson compared the incidence of rickets in the upper classes (Brahmins, Hindus and Muslims) and the lowest classes (lower caste Hindus, poor Muslims, and social outcasts).

Women in the first group had a rich diet but maintained purdah [wore veiled clothing and stayed indoors wherever possible] from about the age of 12 years, whereas women in the second group had a poorer diet, lived in squalid conditions, but worked outdoors all day and did not maintain purdah.

The incidence of rickets was by far the greatest among the upper class group, a difference that can be attributed to their practice of purdah and restricted exposure to sunlight. Presumably, skeletal deformities that may have ensued would have been masked by the voluminous body covering.

I was interested in the recent correspondence about alchemy (Chemistry World  , May 2010, p40) as I have often wondered whether there was a more mundane explanation for the well reported objectives of its practitioners. Faced with the same problems as modern chemists, I can see two alternative pitches for funding.

’My Lord Duke, would you please support my research work because:

1 I am doing fundamental scientific work and, as a result, may discover something that will make me famous, and many generations of scientists will remember my name. It may be that I might also stumble on something that could be of advantage to yourself;

2 I am trying to find a substance which would make you rich beyond imagination, by turning base metal into gold. I may happen to discover a hitherto unknown chemical element, but this would not be the main aim of the work.’

I should be surprised to learn that I am the first person ever to think of this concept.

I was depressed to read your editorial Averting disaster  (Chemistry World, June 2010, p2).

Bertrand Russell observed: ’The greatest challenge to any thinker is stating the problem in a way that will allow a solution.’

In fact your readers are left only with the alarming impression that humankind’s attempts to minimise (the frequency of) disasters are futile - and that we have even more to fear about nuclear power than before the current issue in the Gulf of Mexico!

As scientists we seek to improve the state of the world.Discrediting the work of the many people who have prevented (other) nuclear disasters since the Chernobyl incident is what you appear to have done, and that is simply strange.

Recent articles in Chemistry World have given the impression that geological disposal of all forms of radioactive waste is the only method for the treatment of nuclear waste (Chemistry World, January 2010, p13). It is a pity that such articles have paid little heed to chemical routes that may significantly lower the radiotoxic loading of nuclear waste. Clearly, geological disposal is an important engineering challenge but chemistry has an important role to play. Partitioning of radionuclides of minor actinides from inactive compounds is favoured by the EU, the US, France, Japan and the UK is beginning to take this approach more seriously. The main long term radionuclides remaining after the Purex process, which removes the fissile nuclei of plutonium and uranium, involve americium and curium. Thus separation of americium(III) and curium(III) from the raffinate from the Purex process would significantly reduce the radiotoxic load of the waste. Such a reduction would mean that the amount of highly active material confined to geological disposal would be greatly reduced. The Americans have the intention of reducing the load to as low a value as possible since the expense for the partitioning would be more than off-set by the reduction of the costs for geological disposal. Europe and other countries could soon follow this approach.

Through the Euratom scheme, the EU has funded research into partitioning and transmutation, which involves turning the long-lived radioisotope into ones with much shorter half-lives using high energy neutrons. British groups such as the group at the University of Reading have been extensively involved in applying molecular design of heterocyclic reagents for the separation of americium from the inactive lanthanides, which are forty times more abundant in the waste stream than americium and curium together. Such a separation was regarded as very difficult, but substantial progress has been made within projects funded by several European Framework Projects. Molecules prepared at Reading have been tested at European Nuclear Institutions and some heterocycles are able to carry out the required separations repeatedly even under intense radiochemical irradiation. It is interesting that the UK’s Engineering and Physical Sciences Research Council (EPSRC) now regards the treatment and storage of nuclear waste as a priority target for research, but care should be taken to consider partitioning (and transmutation) as part of a strategy for reprocessing nuclear waste (Chemistry World, May 2010, p5).

Lucy Miller’s article ’To tidy or not to tidy?’ (Chemistry World, January 2010, p80) is a reminder of the unique features of planet Earth: its formation at 4.54 ? 109 years ? 1 per cent BP (before present), the role of plate tectonics in creating a dynamic planet, the development of the oceans and an oxygen rich atmosphere capable of supporting the biosphere which eventually gave rise to Homo sapiens about 200,000 years ago as a species capable of dominating the planet. Of particular relevance is the role of entropy which represents randomness or disorder of the system and its surroundings in the system and which is increasing as a consequence of spontaneous and irreversible processes.

In fact, mankind uses energy to produce order. The second law of thermodynamics requires that the energy used be degraded, and that increased disorder (or entropy) results. This disorder can be thought of as environmental degradation and has been steadily increasing as a consequence of industrialisation and modern methods of agriculture over the past two centuries. In 2008, total worldwide energy consumption was 4.7 ?1020 J of which 80 to 90 per cent was derived from the combustion of fossil fuels, leading to a significant increase in entropy. As a consequence, the total energy input devoted to environmental degradation as a result of man’s activities is substantial.

Environmental degradation (disorder) is therefore a corollary of mankind’s occupation of the planet and his economic activity and cannot be totally eliminated by better management. This view is of importance in assessing the possible extent of environmental change in the 21st century and beyond and the remedies necessary to ameliorate this situation. Perhaps the leading thinker on the topic is Nicholas Georgescu-Roegen.