Reading The changing shape of chemistry, 1998 to 2008, I am reminded of what never changes (Chemistry World, April 2009, p39). Nowhere is there any apparent attempt to define the purpose, or purposes, of a chemistry BSc. This is not a demonstration of ’academic freedom’, but, rather, of academic licence. My own chemistry BSc in the 1960s was dominated by topics in which the lecturers happened to be well versed, for example, the dropping mercury electrode in physical chemistry, and the reaction mechanisms of the cyclotriphosphazenes in inorganic chemistry. The whole of benzenoid aromatic chemistry and the aliphatic chemistry of carbon chains, around both of which entire industries have been constructed, were completely omitted.

However, there is a wider, more disquieting, absence. There would seem to be no mention anywhere of teaching about the ’philosophy of science’, no mention of the meaning of empirical truth in science, no mention of Popper or van Fraasen; in short, no mention of the intellectual foundation of the revolution in Western thought that would transform chemistry from being a mere trade into an intellectual vehicle which gives us insights into the nature of the universe and our place in it.
C Delmonte CChem FRSC
South Creake, Norfolk, UK

With reference to your news item Mega mergers sweep pharma industry  (Chemistry World  , April 2009, p14), I should like to point out that this is nothing new.

It may have started by the share exchange around 1916 between Hoechst and Cassella (of which my grandfather Adolf Gans was a co-owner), then on to IG Farben and the defensive formation of ICI, etc. As Benjamin Franklin said back in 1767, ’If we don’t hang together, we’ll hang separately’. Plus ?a change.
P H Plesch CChem FRSC
Northampton, UK

It is a pity that the economists did not pay more attention in their chemistry lessons. Had they done so we might not be facing such a vicious downturn in our national economy. Money is a man-made catalyst designed to promote a reaction between people who want to trade. Without money the reaction rate slows down to that determined by the process of bartering. As a catalyst it must be readily available to the reacting components, in this case by a homogeneous distribution throughout society (the reactor).

Over the past three decades, by various processes the catalyst has separated out and finished up in isolated pockets called the Mega Rich. For a time the reaction has been sustained when Mega Rich injects some of the catalyst back into the reactor by a process known as Lending. However the Loaned catalyst possesses chelating properties called Interest. Thus after Loaned catalyst has reacted and returns to its base location with Mega Rich, it takes with it chelated money which, in the long term, reduces further the amount of money in circulation. Starved of catalyst the trading reaction slows down.

Finally there comes a time when the injected catalyst can not find sufficient free money to chelate. This stage is called a Credit Crunch and Mega Rich injection ceases. The trade reaction then slows down to the barter rate. This is what has happened and caused the present economic crises. Clearly more catalyst needs to be added to the reactor but modified so that it can not accumulate into Mega Rich pockets.
B Skelcher CChem MRSC
Leiston, UK

As much as I enjoyed the April edition of Chemistry World   (particularly the interview with my old mentor, the great Prof de Silva) I was a bit annoyed with Derek Lowe’s article (p20). As a chemist who did his PhD in a pharmacy department (in the field of drug delivery) and then worked in industry, I find his description of the drug discovery process sadly reflects the opinion of many chemists: that the jump from candidate identification to clinical is usually instant, and the complicated processes of pre-formulation and then formulation are often ignored. It is a common misconception or omission that many chemists make: formulation is ’dead easy’ and ’just a matter of sticking the drug in with some other bits’ are comments I commonly hear. If it is so easy, why are certain molecules a real challenge for delivery science - insulin being the classic example? Why capsules and not tablets? Why an injection? Or a patch? Unfortunately, to many chemists these questions are usually considered ’trivial’ or ’pointless’. They are, in fact, the key to turning potential drugs into medicines. And patients take medicines, not drugs.

It is not just chemists who do this; the lack of a specific drug delivery board in a research charity or council is disappointing, to say the least.
G Moss CChem MRSC
School of Pharmacy, University of Hertfordshire, UK

The article on iron fertilisation of oceans to promote microalgal growth (Chemistry World  , March 2009, p22) may illustrate an inherent problem that science, and particularly chemistry, suffers in dealing with a major multidisciplinary problem: there is no place for a general logic analysis of the problem. Nobody knows everything, and the scientific paper focuses on one point, usually the measurement of something, from which conclusions are drawn. The measurements are usually characterised by extreme skill, but because of what the authors do not know the same does not follow for the conclusions, yet these are what the reader takes away.

In this particular case, it was shown that microalgal growth increases with iron fertilisation of the ocean, although not necessarily reproducibly, and that only a relatively minor fraction eventually sinks to the bottom, and hence fixes carbon. The conclusion was: this concept is not worth pursuing, and there are better ways of reducing CO2 levels.

If there were a place for a logic analysis, one might consider that other elements than iron might be necessary, which would explain the variable results from different trials. One might consider the effect of increasing the biological mass, thus even if it makes little difference to climate, it may improve the fish population. One might question the argument that there are better ways to remove CO2 because there is no sign that levels are reducing. But most importantly, one might consider that microalgae naturally send dimethyl sulfide into the atmosphere, where photo-oxidation converts

it into sulfate that nucleates water vapour to form clouds, which will raise the albedo over the oceans. Reflecting UV/visible light over oceans (with albedo  < 0.1) is probably the most effective way of fighting global warming.

Scientific societies should consider providing an electronic site where scientists with different backgrounds can contribute their subset of knowledge and where all contributions can be analysed logically.
I Miller MRSC
Lower Hutt, New Zealand 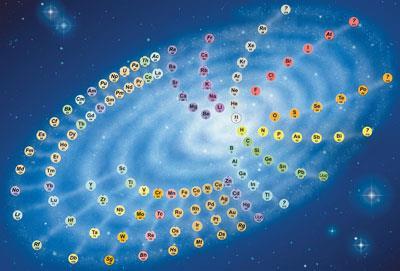 By an unfortunate misunderstanding, an out-of-date version of my ’chemical galaxy’ was published as an illustration to the article Periodic change  by Eric Scerri (Chemistry World  , March 2009, p46). The choice between tables and spirals is not merely a matter of taste. A spiral design represents the elements as a continuous sequence, which is lost when it is broken into the rows of a table. A spiral also clearly shows the unique position of the lightest elements at the centre (including, in my version, matter of atomic number zero consisting entirely of neutrons, as in a neutron star).
P J Stewart
Oxford, UK

I recently read an article in The Guardian  about the composer Handel, who was said to have died from lead poisoning. The source of lead was said to have been his wine, which I presume was sweetened with lead acetate (sugar of lead). I was given sketchy details of a cure for lead poisoning (before EDTA) in which the patient was immersed for days on end in a barrel of warm water, up to their neck.

He was probably taken out at intervals for ablutions and food/drink etc. It was not known how it worked until the 1960s when astronauts were found to lose calcium (and lead?) under weightless conditions from their bones. Does anyone have any further details? Perhaps it could be tried instead of, I understand, the rather unpleasant EDTA treatment.
N Nicolson CChem MRSC
London, UK

A colleague passed to me the recent article on perfluorinated chemicals: PFCs linked to infertility  (Chemistry World  , March 2009, p7). I am writing just to point out that the title is a little misleading as it refers to issues with functionalised PFCs such as PFOA (perfluorooctanoic acid) and PFOS.

My company manufactures PFCs without functional groups and while there are issues regarding their longevity in the environment they are not associated with the problems highlighted in your article.
G May
F2 Chemicals, Lancashire, UK