So now (post 30 September 2009) you can't buy sodium chlorate weedkiller, ostensibly as the result of a Brussels directive

So now (post 30 September 2009) you can’t buy sodium chlorate weedkiller, ostensibly as the result of a Brussels directive. Apparently it is too toxic. Or is it that it can be used as an oxidant in terrorism? (But I understand the commercial product contains fire suppressants, and in any case I can still buy sodium nitrate.)

So the net result is that when you go to the local garden centre or the like, the only product you can find is the much more expensive Product X produced by Manufacturer Y (both of which must be nameless because of the libel laws). But then I see (in the small print) on the Product Y container that it has to be kept away from pets and children and food - otherwise it is obviously quite safe.

Isn’t this situation anti-competitive, an aspect that Brussels also concerns itself mightily with?

And in any case, sodium chlorate weedkiller is supplied as the solid, where Product X or the like would be queried if it were also so supplied.

Perhaps the solution (literally) is to supply sodium chlorate weedkiller only as a solution below a certain concentration, as is the case with some pharmaceuticals/medicines.

It looks as if there is no-one in Brussels to look after the orphan chemicals like sodium chlorate weedkiller, but plenty of manufacturers lobbying on behalf of Product X and the like.

What is going to happen when weeds become resistant to Product X and there’s nothing left like sodium chlorate weedkiller to use?

What is the RSC, or the other European chemical societies, doing in Brussels, to prevent this kind of ’chemical correctness’?

The RSC takes an active role in informing and influencing UK and European chemicals control legislation by responding to official consultations, membership of the UK Chemical Stakeholder Forum and EU expert working groups, and direct approaches to members of parliament, MEPs and senior UK and EU government officials. Our main objective, in this regard, is to ensure that regulations pertaining to the control of chemicals are scientifically sound, risk-based, proportionate, workable and sustainable.

I was interested to read of the coating being applied to car bodies to make them reflective towards infrared (Chemistry World, November 2009, p17).

There is another application to which such technology can be applied: hydrocarbon storage vessels. Such a vessel, if exposed to solar flux, will absorb some of it and heating of the contents will result. Sometimes white paint has been used to minimise this difficulty. This will only be effective if, almost paradoxically, the white paint makes the vessel a grey body in the sense of that term in thermal radiation - that is, if the painted surface has the same emissivity towards all wavelengths of radiation it receives. 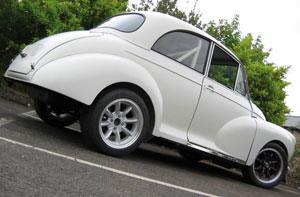 Returning to cars, in the days of more basic cars such as Morris Minors and Ford Cortinas, it was believed that white paint made for comfort, and white was for that reason a popular colour for those models in Australia.

Unless the paint is reflective not only in the visible but at wavelengths on the high and on the low side of visible it will not keep a car cool. That is why the coatings described in the Chemistry World  article, which provide reflection of infrared in particular, would be expected to be more effective than the naive use of white paint which once prevailed.

Your article on lab glassblowers (Chemistry World, August 2009, p46) followed in a later issue by a photo of Lord Jack Lewis brought back a significant memory for me. I was an organic research student at Nottingham in the early 1950s. One day I pulled out a drawer of stillheads, adaptors, separating funnels etc too far and the whole lot fell to the floor with an almighty crash. In a very short time some inorganic chemists from along the corridor appeared thinking that there had been an explosion.

Among them was Lewis who said: ’Give me the bits and I’ll repair what I can’. He did a magnificent job and the repaired items served me well for the rest of my stay.

As an impecunious student I was very pleased not to need to withdraw extra items from the stores against my lab deposit.

Many thanks to Lord Lewis.

Derek Bailey raised the matter of oxygen depletion as part of the ongoing debate concerning the increase of CO2 in the atmosphere (Chemistry World, August 2009, p36).

The replies in the September issue’s letters pages (p38) suggest that the problem is not significant if estimates of long-term reductions of 0.1 to 0.2 per cent are correct.

However, the combustion process also irreversibly produces H2O which (based on CH4) could double the estimate. The weight of H2O produced (based on -CH2-) could be nearly half that of the CO2.

These crude estimates, together with irreversible industrial nitrogen fixation (for which Kira Weissman predicts dangerous potential consequences: Chemistry World, October 2009, p46) do seem to suggest the need to monitor - and publish - the overall atmospheric composition rather than concentrate on the inevitable increase in CO2.

At its simplest, the major atmospheric components, oxygen and nitrogen, are both decreasing in their individual cycles but their fall in percentage composition is significantly exaggerated by the increase in minor components (CO2, H2O, CH4 etc).

I had the pleasure of accompanying my grand-daughter, who is studying A-level chemistry, to the RSC’s ’Meet the Universities’ event and was very impressed by the support being given by RSC ChemNet. But, how is an average GCSE student interested in chemistry catered for today and does the RSC exercise any similar support role?

For comparison, rewind 62 years when some 35 such students enrolled at the Bristol Merchant Venturers Technical College on a seven year part-time course endorsed and supervised by Royal Institute of Chemistry (RIC) leading to ONC, HNC and then to Associateship by external exam. All were working initially in a range of junior scientific posts but released by employers to attend college one day per week, supplemented by evening study. Many completed the full course. Course costs were covered mainly by employers, with students paying for books. Quality of theory and practical tuition was good and supportive with successful students emerging debt-free and with an Honours degree equivalent qualification.

In connection, while I find Chemistry World  interesting, a student picking it up for the first time could be forgiven for thinking chemistry is primarily about drugs, drug-related products laboratory research, and academia. There appears to me to be a shortage of topics which might catalyse wider interest, eg a series of articles devoted to the chemistry of the car.

They could cover materials of construction, fuels, lubricants and hydraulics, chemistry of tyres, and rubbers, paints, pigments and solvents, road surface chemistry, and engine management hardware. The topic could be expanded easily into alternative fuels and power trains, thermo and electro chemistry, recycling, and sustainability of resources etc.

I am ever grateful to RIC/RSC for providing a study route to a satisfying career in industrial chemistry.

The RSC provides a wealth of resources to support students, many of them easily accessible to all online via LearnNet. The Bill Bryson prize is run every year to encourage science communication for all ages and Spectroscopy in a suitcase in now available for all GCSE students. The RSC also continues to provide excellent professional training to teachers of chemistry who are best placed to support their students.

It is hard to get excited about the momentary appearance of two nuclei of element 114. With a maximum of 176 neutrons, any isotopes obtained by firing calcium 48 at plutonium 242 are certain to be very far from stability (Chemistry World, November 2009, p22). To go from lead 108 to the most stable isotopes of uranium and plutonium it is necessary to add twice as many neutrons as protons, and the proportion is likely to increase further for heavier elements. A back-of-envelope calculation suggests that element 114 needs at least 190 neutrons for any degree of stability. Similarly, one would expect element 112 to need about 186 and not the 166 provided by hitting lead 208 with zinc 70.

Until there is some way of making ultra-heavy nuclei neutron rich, they will remain an abstruse curiosity, mainly useful for commemorating physicists or their laboratories, the latest being Copernicus, who may not even have believed in the existence of atoms (Chemistry World, August 2009, p5). Meanwhile, there are serious contributors to the Periodic System who have not been honoured with an element: Henry Moseley, Charles Janet and Fred Hoyle spring to mind. Chemists should boycott the absurd naming of elements that will never be subject to a proper chemical experiment, and which can perfectly well be talked about as ’element number so-and-so’.

Pray let me clarify a minor point in the article Classic kit (Chemistry World, November 2009, p72). The filter press is so called because it consists of corrugated plates and open frames placed alternately with filter cloths between them. They are then pressed together very firmly so that there is a seal between each plate and frame.

The suspension to be filtered is pumped through a hole in the edge of each frame so that it is filtered through the cloths at both sides, the liquor flowing down the corrugations in the faces of the adjoining plates and running out through a connecting hole in the bottom edge. There is no mechanical force on the product apart from the pump.

As one of the last of the old fashioned industrial chemists I enjoy Andrea Sella’s articles immensely.

I find excellent the idea of defining as ’nanoparticles’ only those particles which differ in some physicochemical features from the bulk or bigger particles, thus constituting something new on a material science basis (Chemistry World, October 2009, p7).

This definition really helps in clarifying a very messy use of the word.

However, when it comes to regulations concerning their potential health effects and environmental damage, aspects other than the ’novel properties’ acquired at the nanolevel have to be taken into account, merely related to their nano-size:

Taking into account these facts, the redefinition proposal by Auffan et al  should be welcomed and accepted by the scientific community.