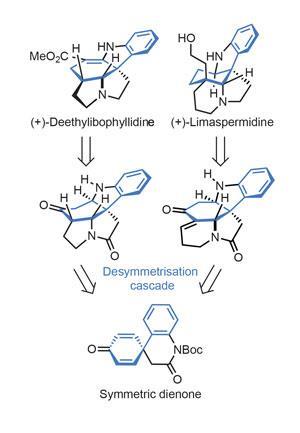 For all the progress that’s been made in synthetic organic chemistry over the past century, there are still a few structural features that give even experienced chemists pause. Undergraduate dogma states that small rings (fewer than five atoms), medium rings (seven to eight) and all-carbon quaternary stereocentres are bad news. But while it’s certainly true that these require a little extra thought when planning a route, they are not the nightmare that they were 50 years ago.

That said, there are few good general methods to make any of them, which is a shame. Quaternary centres, in particular, abound in natural products, and nowadays it’s important not just to be able to form them, but to do so stereoselectively. Indeed, if they were a little easier to build into molecules, we’d probably see them crop up a bit more often in the notoriously flat world of medicinal chemistry and – given the number of bioactive natural products that include them – that might be a good thing.

One less common approach to these challenges that is increasing in popularity is desymmetrisation. The idea is simple – make a symmetrical molecule, which is generally easy, then break that symmetry. The main drawbacks are that this usually only sets one stereocentre, and it often doesn’t make particularly useful products. However, both of these problems have been overcome by Chun-An Fan’s group at Lanzhou University in China, in a synthesis of two Apocynaceae alkaloids using a desymmetrising cascade reaction (figure 1).

Natural product aficionados will no doubt recognise this family, since it’s given the synthetic community some of its favourite targets – as well as several clinically used drugs. Indeed, reserpine, aspidophytine and the Vinca alkaloids all come from this group of plants.

Somewhat unusually, the team’s key step actually comes at the very start of the route, allowing plenty of time and material to optimise it. The cascade involves first opening a lactam with a primary amine. The protected aniline ejected from this aminolysis step is guided by a bifunctional thiourea catalyst to cyclise enantioselectively onto just one of the two prochiral dienone olefins (figure 2). The yield is just 45%, but there’s an old adage that the best place for a mediocre yield is the first (or last) step, and the group cleverly uses the hydrocarbazole product from this reaction to make both of the target natural products. 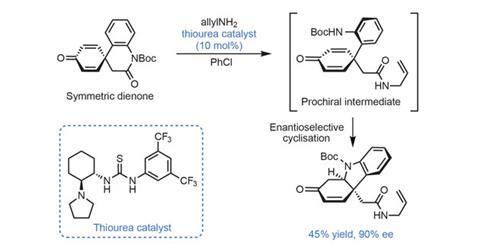 Next, treatment with sodium hydroxide causes cyclisation of the amide onto the enone, forming the penultimate ring. Oxidising the allyl group to an aldehyde with palladium catalysis and an acid-mediated aldol condensation with the nearby ketone completes the pentacyclic core. At this point the team finally obtains an intermediate that can be recrystallised to improve the enantiomeric excess all the way up to 99% without significant loss of material (figure 3).

From this point, only a few functional group manipulations complete (+)-limaspermidine, although some trouble with chemoselective reduction of the amide necessitated some unexpected steps.

For (+)-deethylibophyllidine, the group takes the product from the desymmetrisation reaction and converts it to a similar ketone. The unwanted carbonyl groups are then burned out; the ketone under Barton-type Wolff–Kishner conditions, and the amide with lithium aluminium hydride. The secondary amine is then chemoselectively oxidised under Swern conditions and the resulting imine is acylated with Mander’s reagent (methyl cyanoformate) and lithium diisopropylamide (LDA) to give the target natural product.

Congratulations to the group on their new methodology – I’ll be interested to see if this can be applied to any other members of this important family.