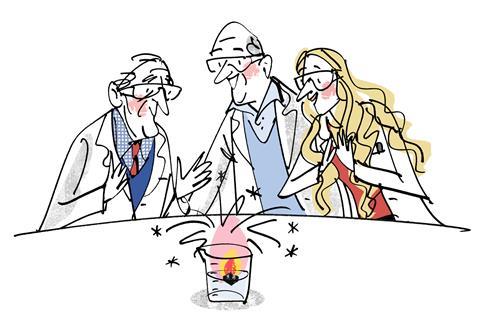 The technology and safety regulations may have changed over the years, but the joys of a chemistry PhD are still the same

There’s an inescapable sense of competition between generations, each one largely believing those before were out-of-touch and those after somehow had it easier. Certainly, society has evolved over the last 60 years, with advances in technology and the internet completely changing the way we operate day to day. But in the world of chemistry, are these differences as profound as everyone thinks? During my PhD I performed many of the old classics: Friedel–Crafts acylations, Fries rearrangements, Dean–Stark protections, all of which are well over 100 years old, suggesting that the cornerstones of organic chemistry remain the same.

Chemistry goes back decades in my family: on both sides three generations have been drawn to the subject, going on to pursue long careers in the field. In particular, I have followed the same path as my dad and my grandpa, both of whom also completed PhDs in organic chemistry – my dad in the late 1980s, and my grandpa in the late 1950s. Having heard stories about their time in the lab all my life, in many ways I think the experience hasn’t changed as much as people think.

The lab of my late 2010s PhD was a fun and informal environment, full of people there for the love of doing science. This extended beyond the limits of our individual research projects, and I remember one memorable occasion when a friend and I had a little excess lithium to play with. We all know how alkali metals react, that the safest quench is with isopropanol, that the metal will catch fire in contact with water and will react vigorously with acid. But at the same time, we were originally attracted to chemistry by visually exciting experiments. Our controlled-vigorous quench was exhilarating, despite the minute scale, and reminded us both of why we’d chosen chemistry in the first place. I later shared this anecdote at home and was eagerly met with two very similar accounts on a slightly grander scale: acid squirted onto a sodium target from increasing distances and potassium pellets flicked into beakers of different acids from across the car park…

Of course, health and safety has ramped up a lot in the last 60 years. Lab practices have evolved, and many formerly commonplace reagents are now heavily controlled, with researcher safety the first concern. Having never known any different, I’m astonished to hear from my grandpa about what a good solvent carbon tetrachloride is or how effective my dad found hydrogen fluoride for cleaning stained glassware – these things are completely unthinkable now. Milder solvent mixtures replaced carbon tet and base baths or lab dishwashers supplanted HF. However, putting aside the specifics of the chemicals we each used, the process of research is still fundamentally the same: we all set up reactions, purified crude mixtures and analysed our products.

The greatest difference probably arises from the advances in technology, particularly relating to compound analysis. Back in the 1950s access to NMR was a rare luxury and instead researchers had to rely on other methods (most alarmingly, ‘give it a sniff’) for product characterisation. By the late 1980s, NMR had become a standard technique but obtaining a useful spectrum was still a slow process. A queue of names on a whiteboard took the place of a modern carousel and each stage in the sample run had to be manually controlled by the user. By comparison, the highly automated processes of today make advanced analysis relatively trivial and most students will analyse thousands of samples over the course of their PhDs. Correspondingly, research expectations have changed, and PhD theses are now much longer than they used to be – mine is twice as long as my dad’s and three times the length of my grandpa’s.

Naturally the writing up process has changed alongside these advances in technology – word processing and ChemDraw are a far cry from the typewriters and structure stencils of old – but I think many of these differences are superficial. Instead of painstakingly tracing out reaction schemes, students agonise over the precise formatting in chemical software packages, ensuring every structure is a perfect geometric representation of the real molecule. Rather than carefully plotting graphs, they battle with Excel to create the ideal best fit line, and in place of neatly hand-drawn diagrams, they wrestle with Word to insert technical images. The process may be different, but the frustration is still very much the same!

Despite the decades separating our respective PhDs, it seems to me that each of our experiences have a lot in common. So as I slide my blue hardbound thesis, gold stamped with the year 2021 onto the shelf alongside the other gold-stamped tomes, marked 1990 and 1959 respectively, I don’t doubt that my dad and my grandpa will both know exactly how I feel.