In the 100th edition of Classic Kit, Andrea Sella explores the science that revealed a change is in the air 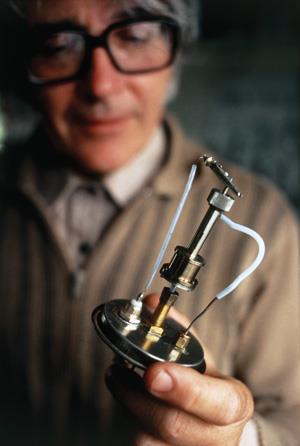 Just before Christmas last year, I watched the comedian Rufus Hound read Julia Donaldson’s children’s book The snail and the whale before a rapt audience at the Apollo Theatre in London, UK. The snail ‘with an itchy foot’ hitches a ride on a humpback whale and, as a world of fathomless oceans and vast peaks unfolds before her, exclaims: ‘I feel so small!’ She encapsulates the enraptured sense of the sublime that drew travellers, painters and poets in the 18th and 19th centuries to the wilder places of Europe.

That sensation is perhaps an extension of the Copernican and Galilean idea that we no longer sit at the centre of a revolving universe. However, one piece of kit has acted as a reality check on romantic ideas of our own insignificance by proving our role in changing the chemistry of our planet: James Lovelock’s exquisitely sensitive electron capture detector.

Lovelock was born in Letchworth, just outside London, UK, but his Quaker family moved to Brixton near the capital’s centre when he was a child. He struggled with the rigid programme of school and, too poor to attend university, began working for a photographic supplies firm while attending night school at Birkbeck College. When the University of London colleges closed down at the start of the second world war in 1939, he applied for a place in Manchester, where his outstanding abilities in the lab caught the attention of Alexander Todd, the future Nobelist.

Aware that Lovelock was a Quaker, and therefore a conscientious objector, in 1941 Todd recommended him for a job at the National Institute for Medical Research (NIMR) in north London. Lovelock remembers the interview for the position as a disaster. Richard Bourdillon, the head of research, was unimpressed by the nervous young man, and was eventually forced to make small talk. What hobbies did Lovelock have? When Lovelock mentioned climbing and reeled off a list of cliffs and crags he had climbed in North Wales, Bourdillon, a keen mountaineer, was hooked. Lovelock got the job.

A key wartime preoccupation for the NIMR was the spread of infections, both among air crew flying over Europe and among the civilians sheltering from air raids in London’s underground tunnels. Lovelock collected samples in the tunnels (‘the air was simply mephitic’) and found oxygen levels as low as 13%, insufficient even to support combustion. His work showed that colds were spread mainly by physical contact – the shaking of poorly washed hands – rather than by sneezes.

As the war ended, his work on infection and his talent for invention led him to devise an anemometer to measure tiny indoor air movements. The principle was simple – a radioactive a-emitter was placed on a metal pin in the centre of a spherical wire cage resembling a 1950s representation of a Bohr atom. By applying a voltage to the wires, ions generated by the central source were drawn to the surrounding cage, producing a current that depended on the speed of the air flow. He tested the device on the aircraft carrier HMS Vengeance on a tour to the Arctic in 1949. It also proved very sensitive to the presence of cigarette smoke and, ironically, halocarbons.

Over the next few years Lovelock worked on an astonishing variety of projects, especially experiments to freeze and then thaw living organisms. To study the cell membranes, Lovelock turned to a new technique – gas chromatography, which had been developed by his colleagues in the NIMR biochemistry division, Tony James and Archer Martin. James gave him a GC to work with and pointed out that Martin’s ingenious gas density balance was too insensitive and complicated for routine use as a detector.

Intrigued, Lovelock began to tinker. With his anemometer in mind, he began working on an ionisation-based detector, having heard of something similar being used in the Shell research labs – if he could ionise some of the molecules leaving the column, he might get a current he could measure. He brought the flow from a column into a small cylindrical chamber through a central brass tube that served as an anode. The chamber was lined with a sheet of silver coated in strontium-90 that acted as both the cathode and a source of ionising ß-radiation. For reasons of safety on the one hand, and cost on the other, Lovelock could not use either hydrogen or helium as the carrier gas. Using nitrogen, however, he struggled to get his detector to work and Lovelock began to fear that his invention might be doomed. He also found that certain inert solvents, especially CCl4,  inexplicably killed the current in the detector. 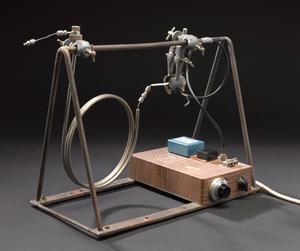 One Friday, however, his nitrogen cylinder ran out and his lab assistant informed him that there were only argon cylinders left. ‘Whatever,’ thought Lovelock, and hooked up the other inert gas. To his astonishment, his detector suddenly gave enormous peaks. Lovelock had stumbled across the Penning effect: the ß-radiation excited the argon atoms into very long-lived metastable states, which then transferred their energy to the molecules emerging from the column, producing a cascade of ionisation that hugely increased the current.1,2 The detector generated a flurry of excitement and a version was soon marketed by Pye Unicam in Cambridge.

For capillary chromatography, Lovelock scaled down the cell for the needs of the much smaller and more powerful columns. At the same time he began to investigate the peculiar behaviour of CCl4 and other halocarbons, and found that they captured all of the electrons in the ionisation chamber, wiping out the current. Hence, for these molecules, the device was a thousand times more sensitive than even the ‘argon’ detector.

The timing was uncanny. Rachel Carson’s book Silent spring, published in 1962, highlighted the dangers of organochlorine pesticides such as DDT. The ECD was perfectly suited to detect them and gas chromatography suddenly became the premier tool of analytical chemists looking for trace pollutants in the environment.

Lovelock now had a firm reputation as a go-to problem solver. When Nasa contacted him to join their planetary exploration team, Lovelock had no hesitation in leaving NIMR.

But his attachment to the ECD wasn’t over. In the early 1960s he noticed a haze in the skies around his house in Surrey, UK, when the wind blew from the east. Convinced it was caused by pollution, he set up a GC–ECD in his shed and started measuring the only really stable molecules he thought would have a solely industrial source: chlorofluorocarbons (CFCs). The correlation with air turbidity was perfect. Measurements he made at his little cottage on the west coast of Ireland were even more surprising – even on clear days when the wind came from the Atlantic he could detect parts per trillion of CFCs. Could this really mean that CFCs were making it across the Atlantic?

He applied for a National Environment Research Council (NERC) grant to travel by ship to Antarctica to make the same measurements. The referees refused to believe that he could measure at ppt levels and rejected the proposal outright. But the programme manager visited Lovelock at home, and after seeing his setup, quietly secured him an unfunded berth on RRS Shackleton. Lovelock spent most of the time on deck enjoying the sunshine (‘I love sea voyages,’ he laughs) and making a few measurements each day. Sure enough CFCs were everywhere, but their levels dropped markedly in the Southern hemisphere, consistent with their industrial origins. 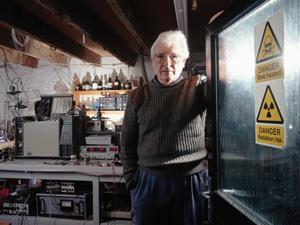 Then, in 1974, CFCs suddenly hit the news: Sherwood Rowland and Mario Molina proposed that they might deplete stratospheric ozone (creating the ozone ‘hole’). The pair predicted that CFC levels should drop sharply in the stratosphere and Lovelock immediately contacted the Met Office offering to make the measurements. The response was infuriatingly bureaucratic – it would take two years to get the necessary safety approval. Irritated, Lovelock phoned a friend at the Ministry of Defence. It just so happened that the Royal Air Force was testing a Hercules aircraft nearby. The pilot was delighted to have Lovelock on board and together they made the first measurements that showed the expected concentration drop 8km up in the sky.

Inspired by his experiences with Nasa and his atmospheric measurements, an idea started to form in his mind: that the Earth was a self-regulating system, much like an organism. He called it Gaia and wrote a best-selling book that galvanised the world and made him a household name. It has become a cornerstone of environmentalism and brought the idea of feedback loops into the mainstream.

Today many of us travel the world yearning for that sense of sublime emptiness, searching for the ‘unspoiled’. Travel books and nature documentaries speak to that yearning too. But when the biologist Eugene Stoermer coined the term ‘Anthropocene’ in the 1980s to characterise the current geological era as dominated by human impact, he was simply underlining a shift in thinking started by Lovelock and his detector. We may live on what Carl Sagan called ‘the pale blue dot,’ adrift in a post-Copernican void, but on this planet, our only home, we are the metaphorical elephant. Isn’t it time that we took the Anthropocene and its consequences seriously? After all, this isn’t a rehearsal.

It is with pleasure that I thank James Lovelock for his reminiscences (and his gentle corrections).