Blinded by the light

Creativity in science requires a deep knowledge of several fields. Only then can you make unexpected connections between disparate observations and open up new areas for exploration. But could the reverse be true? Can you ever know too much? How often has a student been successful with an experiment that was ‘bound’ to fail? Max von Laue expressed astonishment that one so inexperienced as Lawrence Bragg had solved x-ray diffraction. So too in the case of the laser, the consensus partially obscured what would eventually become a major technology. 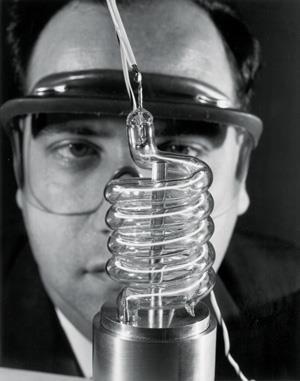 In a 1917 paper, Albert Einstein showed that a photon would only be absorbed by matter if its energy matched the precise energy gap between two levels. He also stated that the energy separation between two levels determines how fast the reverse process, emission, will occur. So optical transitions, where the levels are separated by hundreds of kilojoules per mole, should be extremely fast.

But Einstein made another, peculiar prediction: that a photon could also be emitted if an excited system interacted with a second photon of the precise energy as the resulting transition. This was stimulated, as opposed to spontaneous, emission. However, this seemed not just untestable, but also perverse: having enough atoms in the excited state to observe this would directly contradict Boltzmann’s distribution of energy, which, ironically, underpinned Einstein’s own 1905 proof for the existence of atoms. Einstein’s paper languished for decades, if not unread, then misunderstood.

In the 1920s, Rudolf Ladenburg’s detailed studies of absorption and emission in gas discharges led him to observe what he called ‘negative absorption’ (enhanced emission) when the energy of the exciting light closely matched that of a transition. But Ladenburg, and others who made similar observations, were too deeply steeped in Boltzmann’s idea of thermal equilibrium to make anything of their observations.

Valentin Fabrikant is thought to have been the first to recognise that forcing a system away from thermal equilibrium to populate the excited state – a population inversion – would provide conditions for stimulated emission to dominate. In his 1940 PhD thesis, Fabrikant suggested that this might be possible in a gas discharge, but the thesis was soon forgotten.

After the second world war, the availability of cheap surplus radar equipment allowed physicists to explore the absorption of microwaves by molecules in the gas phase. At Columbia University, US, then the leading physics department in the world, Charles Townes began to toy with altering the energy distribution of molecules – building on the institution’s molecular beam work that had already led to the discovery of magnetic resonance.

As a beam of excited ammonia molecules was fed into a cavity (tuned to resonate at a particular transition frequency of ammonia), the emitted radiation would, in essence, be trapped and stimulate the emission from fresh molecules entering the cavity, leading to a positive feedback. The result was stunningly uniform and narrow microwave radiation, which they called a maser (microwave amplification by stimulated emission of radiation).

In Russia, Nikolay Basov and Alexander Prokhorov arrived at the same result.

But if enhancement could be achieved with microwaves, could there be an optical equivalent? ‘Capturing’ shorter wavelengths  in a resonant cavity was impractical, but with a former postdoc, Arthur Schawlow, Townes wrote a paper proposing that this might be achieved using a Fabry–Perot interferometer – two parallel mirrors to bounce light back and forth between them, driving the emission.

Their paper set off a frenzy of research, and a conference in 1959 attracted all the players in the field. Many approaches, mostly involving gases and metal vapours, were picked over. But ruby – chromium atoms embedded in an alumina matrix – attracted the attention of Theodore Maiman of the Hughes Aircraft Company. Although dismissed by Schawlow and others on theoretical grounds, Maiman thought it might work if he had a bright enough light.

Trawling through catalogues he found spiral xenon flash lamps. After silvering the two ends of a ruby rod, leaving a small hole at one end, Maiman flashed the rod and saw a substantial decrease in optical absorption, a tell-tale sign of a perturbed population. It occurred to him that placing the rod inside the spiral of the flash lamp would make the illumination even more intense. On May 16, 1960 they observed the first deep red laser flash. In a frenzy of excitement he submitted a paper to Physical Review Letters. The editor Samuel Goudschmid famously took one look at the title, ‘Optical maser action in ruby’, and rejected it as more of the same from an over-hyped and crowded field. A shortened note was instantly accepted by Nature. 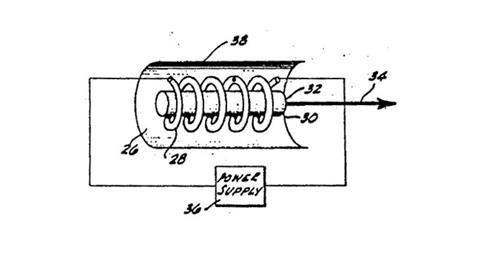 Within weeks several groups had repeated the work, and laser behaviour would soon spread from solids to gases and metal vapours, to ions and dyes and eventually semiconductors. As Schawlow joked, ‘anything will lase if you hit it hard enough’. And the laser itself would etch itself into the collective imagination. But the tortuous story of the laser is another reminder of how hard it can be to break out of established ways of thinking. Sometimes, just sometimes, stepping away from received wisdom can let you see the light.

I am grateful to Steve Price for guidance and gentle corrections.