In 1972, Jim Croce reached number 1 in the US music charts, singing ‘If I could save time in a bottle…’ A year later he was killed in a plane crash. In times of tragedy some turn to religion for comfort. For the rest of us, the second law is of little help in quelling our disquiet at the inexorable passage of time. 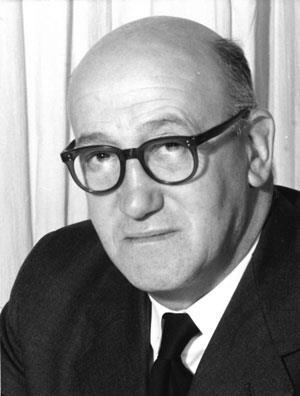 Quantifying time has been a central concern for science, from ancient water clocks to John Harrison’s remarkable chronometers that turned navigation’s once dangerous gamble into profitable business. Timekeeping was also a core concern for astronomers, who calibrated their clocks by the movement of the supposedly steady Earth and moon against the fixed stars.

The discovery of the piezoelectric effect by Pierre Curie ushered in a new era: a quartz crystal set in oscillation by an electric field could provide a steady beat for electrical circuits, offering a new approach to timekeeping.

Against this background, Louis Essen, a shy physics graduate from Nottingham, UK, joined the National Physical Laboratory (NPL) in Teddington in 1929. He worked under David Dye, who was pioneering the use of the oscilloscope to investigate electrical circuits. Dye set Essen working on quartz crystals of different geometries. With a vibrating rod, Essen carried out a variant of the Michelson–Morley experiment on the basis that by rotating the crystal one might see a change in frequency as a result of the Earth’s motion through the ether. Meticulous in his work, Essen saw no difference to within one part in 1011.

He then turned his attention to an idea of Dye’s: by cutting the crystal into a ring and suspending it by six silk threads they could set it into a standing vibration with six nodes. Miniaturised and refined, the Dye–Essen ring would mark time in almost every watch, radio and other electronic item for decades. But there was still room for improvement.

In 1933, Isidore Rabi extended the Stern–Gerlach experiment (that had revealed electron spin) to determine the much smaller magnetic moment of the sodium nucleus. Rabi, with his graduate student, Victor Cohen, passed beams of atoms through three regions. The atoms were deflected by an inhomogeneous magnetic field in first region, selecting atoms in a single spin state; in the second region, the selected atoms travelled through a cavity in a uniform magnetic field; and in the third, they arrived at a detector via another inhomogeneous field. By applying a radiofrequency (rf) field in the cavity and tuning it to the atoms’ spin frequency, the atoms would change spin state and were no longer detected. Rabi had invented magnetic resonance, for which he would be awarded the Nobel prize in 1944.

In 1945, Rabi gave a lecture in which he suggested that the resonance method could be used to build a timekeeper based on absolute atomic properties rather than arbitrary astronomical observations. At the National Bureau of Standards in Washington, US, various approaches were tried, including using the vibrations of ammonia, but when the project failed to bear fruit it was abandoned.

Essen learned about the abortive experiments on a visit to Washington in 1950. He returned to the UK convinced that he could build a better clock by combining Rabi’s atomic beam methods with his own quartz timekeeper. He chose caesium because the hyperfine coupling between its single valence electron and nucleus gave a pair of conveniently separated spin states with long lifetimes. He packed a version of Rabi’s apparatus into an evacuated 1.5m tube, with the improvement of Norman Ramsey’s U-shaped microwave cavity providing two excitation regions and thus much narrower signals. The detector was now connected to a clock built from one of Essen’s quartz rings, kept precisely in time by linking it to the rf field in a feedback loop. Any slowing of the ring’s rhythm would pull the rf field off resonance, causing a change in the detected signal and automatically triggering a correction of the beat. His first clock kept time to within one second in 300 years; Essen was so excited that he dragged the director of the NPL ‘to witness the birth of atomic time’. 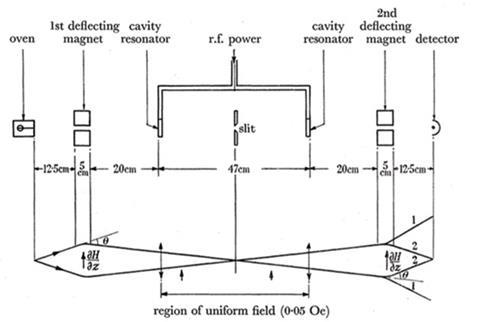 Tying time to the atom, the clock attained unprecedented precision

Once referenced to the astronomical standard at the Greenwich Observatory, an NPL clock became the world’s standard for time calibration. Essen and his colleagues steadily developed more precise clocks, first by lengthening the tube and then by cooling the caesium. The International Bureau of Weights and Measures would eventually redefine the second and, in turn, the metre on the caesium transition frequency.

The atomic clock provided the means to reveal the subtleties of the Earth’s rotation. It also provided exquisite tests of Einstein’s general relativity, which, ironically, Essen never came to terms with. But the clock’s impact was much deeper. With the arrival of the packet switching protocol for communications, accurate clocks became essential, and more sophisticated clocks have enabled both global positioning satellites and the big data gathering that have become so crucial to science. Far from catching time, Essen had truly let the genie out of the bottle.