I stood amid the carnage it had wrought. We should have seen it coming. We were naive. The strange, wobbling mass moved toward us, steady and deliberate, infecting everything it touched. I’d created a monster…

It was time to throw the latest batch of marshmallow away and start again.

Creating marshmallow was the most difficult (and fun) recipe yet. If you want to follow the recipe, be warned: sugar work is not easy and potentially extremely messy. You may not get it right the first time – it took me four attempts – although you’ll have a great time trying until you do.

Ensure you have everything prepared before you start, and take time to grease and dust your container in advance; once things start bubbling and foaming, you won’t have time to attend to anything else. I also strongly recommend only using pans with a lip and equipment that you can submerge and boil, as this will save you a huge headache when you come to wash up. 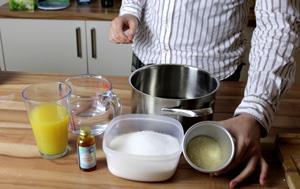 I started by placing the sugar, corn syrup, juice (orange in this case) and a teaspoon of food colouring in a saucepan, then placed it on a hob turned to full heat. The mixture remained at 110°C or so until the water was mostly boiled off. I noticed the mixture developed an intense, malty aroma from the corn syrup, so make sure your flavourings complement this (for example, you could use pineapple, chocolate or even whisky).

I kept whipping until the mixture cooled, then poured my future marshmallow into a container, sealed it and stored it in the freezer. This will quickly set the gelatine and trapping as much of the air as possible.

At this point you should have a tub of soft, pillowy marshmallow to enjoy, which you can turn out on to a well-dusted surface and cut into cubes. For this I used a sharp knife, which was greased to stop it from sticking to the mixture. This left me with some tasty treats to share, although I don’t want to think about the sugar content!

Let me know how you get on when you try the recipe. Did you end up with the same blob-like creature? What flavours did you try? And, if you added whisky, did the alcohol affect the texture? 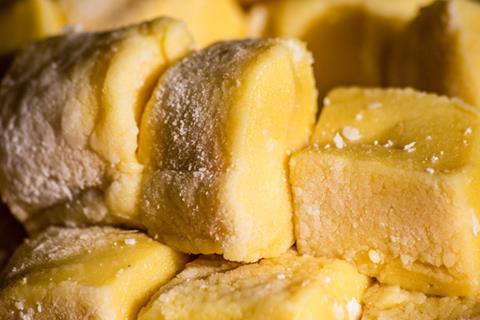 The finished marshmallows were both pretty and tasty, though slightly more dense than shop-bought ones