When I was a student, I stumbled across a copy of Thomas de Quincey’s On murder considered as one of the fine arts. It is a hilarious satire that considers the aesthetic merits of different murders. It has often come to my mind when people have jokingly said to me that surely, I, a chemist, could come up with the ultimate, perfect and untraceable poison. Yet surely murder will out. It is hard for us to imagine a material that vanishes completely; could there really be a poison that leaves no spoor that a resourceful chemist could not track, given time and ingenuity?

Among the earliest and most delicate forensic tests is that for arsenic – a test so legendary that a positive result could consign a suspect to the gallows. Its inventor, James Marsh, was born in Woolwich, then just outside London, UK, in 1794. Nothing is known of his parents or education; he is first recorded in 1822 working as a lowly ‘practical chemist’ at the Royal Arsenal, not far from where he was born. The Royal Arsenal was the main munitions factory for the British military in the 19th century, and included research labs that would later attract some of the best young chemists graduating from August Hofmann’s Royal College of Chemistry.

The Arsenal was attached to the Royal Naval Academy, and Marsh began working with Peter Barlow, a professor of mathematics who also taught physics and is remembered for a device called ‘Barlow’s wheel’. Marsh improved on a related apparatus invented by André-Marie Ampère and developed a portable electromagnetic device – an early dynamo – for which the Royal Society of Arts would award him a silver medal and a prize of 30 guineas (a substantial sum, perhaps equivalent to 20 weeks’ wages).

In 1829, Michael Faraday became professor of chemistry at the Naval Academy, a position that paid him £200 to give 25 lectures a year. The money supplemented his modest wages at the Royal Institution and allowed him to devote the rest of his time to his own research. James Marsh became his assistant, paid 15 shillings (there were 20 shillings to a pound) a week. Marsh would not only have prepared lecture demonstrations for Faraday, but also been the primary contact with students in the teaching laboratory; he did so for the rest of his life.

Marsh must have made a name for himself as a problem-solver, because in November 1833 he was called upon to investigate a murder that was thought to have involved arsenic. A young man, John Bodle, was accused of poisoning his grandfather, George, by adding arsenic (arsenic oxide, a common rat poison) to his coffee. At the time, arsenic was detected using a test invented by Samuel Hahnemann (today best known as the father of homoeopathy), that is still familiar to undergraduates doing qualitative inorganic analysis: hydrogen sulphide, when passed through an ammoniacal solution containing arsenic, produces a yellow precipitate. It was probably a straightforward to test to perform with ground coffee, and Marsh confirmed the presence of the metal. But it was a different matter to establish the presence of arsenic in the stomach contents of the murder victim, and by the time the coffee results were presented to a jury, the precipitate had deteriorated. Bodle was acquitted – he later confessed to the crime.

Marsh vowed to come up with a better test. Two years later, he developed a beautifully elegant solution. In 1775, the Swedish chemist Carl Wilhelm Scheele had discovered that if zinc was added to arsenic dissolved in sulfuric acid, a colourless gas that smelled weirdly of garlic was evolved alongside the hydrogen. The gas, ‘arseniuretted hydrogen’ or arsine (AsH3), developed an unsavoury reputation after the German chemist Alexander Gehlen inhaled it and died. Indeed, some have commented that Scheele must have had a charmed life, having discovered both hydrogen cyanide and arsine in an age before labs were equipped with fumehoods. It was this discovery that Marsh put to use. 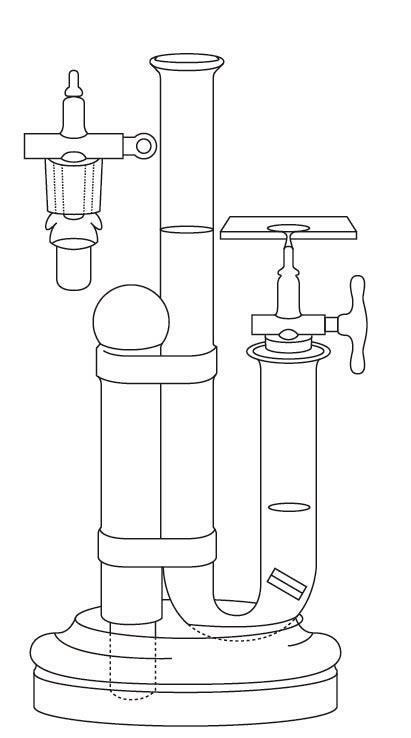 Marsh constructed a miniature Kipp’s apparatus: an unsymmetrical glass U-tube the shorter arm of which was surmounted by a small valve with a nozzle. A piece of zinc was suspended in the short side and the device was then filled with sulfuric acid. When a sample was added to the other arm and stoppered, hydrogen and arsine would build up in short arm of the tube. The gas could then be released through the nozzle and ignited. On playing a piece of glass into the whitish flame, a brownish/black spot of arsenic metal would appear. An alternative device, for use with larger samples, was a modification of the Döbereiner lamp with a vertical nozzle, with the zinc suspended on a wire. Marsh reported satisfactory results with ‘three pints of very thick soup … port wine, gruel, tea, coffee, etc. etc’.

Marsh’s method drew every chemist’s attention. The Society of Arts again awarded him a medal – this time large and gold. In Germany, Karl Friedrich Mohr said it was a game-changer and proposed using porcelain rather than glass. Justus Liebig instead passed the escaping gas through a heated glass tube, leaving a silvery cylinder of reflective arsenic metal on the walls – perhaps the earliest example of chemical vapour deposition. When I have recreated this version of the test, the appearance of the little mirror is a magical moment that causes everyone present to gasp in unison. In 1840, the beautiful Marie-Fortunée Lafarge was accused of murdering her much older husband Charles with arsenic. The tabloid press were agog as a flamboyant French forensic chemist, Mathieu Joseph Bonaventure Orfila, used the Marsh test to establish the presence of the poison in the old man’s body. Lafarge was sentenced to life imprisonment and Marsh’s test was publically acclaimed as the would-be poisoner’s nemesis.

But for all the lurid excitement, for Marsh there was little advancement. Although he seems to have been widely respected, Marsh remained based at the Royal Arsenal, focused on his explosives work. In 1837, he was awarded another Society of Arts medal for inventing a new percussion cap. In January 1845 he published a long paper in The Chemist describing the formulation of gunpowders and signal rockets used not only by the British but also covering those of the French, American, Russian and Chinese governments. In 1845, the Times reported that experiments were to be conducted at Portsmouth to compare shells equipped with fuses of different design, including 80 developed by Marsh. Whatever the outcome, Marsh probably never heard about it. He died suddenly in the autumn of that year.

Surprisingly for such a prominent and young scientist, his death got only a fleeting mention in The Times, which drew attention to his salary – a mere 30 shillings a week, little more than that of a foreman. His death left his wife and two daughters destitute. When his widow applied to the Board of Ordnance for a pension, they awarded her just £20. There was outrage at the paltry sum, and a public collection soon matched the amount. The sum was so derisory that a week later The Times printed a letter from a gentleman in Brussels, proposing a subscription to raise money for Marsh’s family. Whether anything came of this is a mystery – there is no further record of it.

Marsh is remembered today for his delicate test that helped to catch the most vicious of murderers. Arsenic may be old hat, yet the quest for the perfect poison remains. In the shadowy world of espionage, natural products like ricin and radioisotopes like polonium have been detected almost by accident; the classic quest continues. What, I wonder, would de Quincey have made of those who took his witty essays literally?

English chemist (1794–1846). Artificer and inventor of a delicate test for arsenic