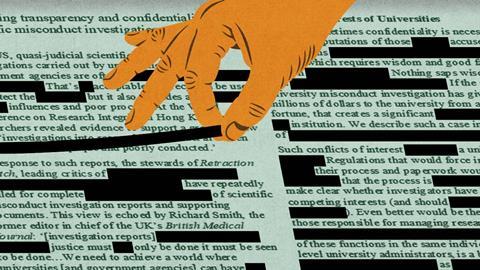 At the beginning of the century, the historian Horace Freeland Judson said that scientific misconduct is ‘massive in scale, bewildering in variety’ and most abundant in ‘institutional cultures that are characterized by secrecy [and] privilege’.1 In the US, investigations into scientific misconduct are quasi-judicial processes carried out by universities or by government agencies and often kept secret in the name of confidentiality. That’s unacceptable, if we are interested in more than quasi-justice. Secrecy can be used to protect the innocent, but it also provides a cover for malign influences and may be one reason why researchers at the latest World Conference on Research Integrity have found that ‘investigations into research misconduct are often inadequate, opaque and poorly conducted’.2

The stewards of Retraction Watch, leading critics of deviations from accepted scientific practices, have called for complete transparency: the release of scientific misconduct investigation reports and supporting documents. This view was echoed by Richard Smith, the former editor in chief of the UK’s British Medical Journal: ‘[investigation reports] should surely all be published: justice must not only be done it must be seen to be done …We need to achieve a world where universities [and government agencies] can have no confidence that reports will remain buried.’ If we are concerned that misconduct will compromise confidence in science, we must oppose measures that insulate its investigation from scrutiny.

Of course, confidentiality is sometimes necessary to protect the reputations of those falsely accused; some investigations should be public and others not. Deciding which is which requires wisdom and good faith, not to mention good regulation. Nothing saps wisdom and good faith faster than competing interests. For example, if the subject of a university misconduct investigation has given tens of millions of dollars to that university, that creates a major institutional conflict of interest. We describe just such a case in the first issue of The Journal of Science Practice and Integrity.3

The investigation of science must be as transparent as science itself.

Conflicts of interest can divert a university from its purpose. Only regulations that would force investigators to reveal their processes and paperwork would give confidence that proceedings are accurate, fair and impartial. Even better would be the insistence that those responsible for managing research-related finances are excluded from maintaining research integrity. Overlap of these functions in the same individuals, typically high-level university administrators, is a breeding ground for corrosive decision making. Lawrence Lessig characterised the psychology of bad choices that puts universities at risk in his recent essay How academic corruption works.

Investigations by federal agencies are another matter still. In the early 1990s, federal science and regulatory agencies in the US crafted guidelines for adjudicating scientific misconduct. Unfortunately, the rules capitulated to university fears of outside intrusion at the expense of rigorous oversight. The Code of Federal Regulations that governs the National Science Foundation (NSF) Office of the Inspector General (OIG) gives institutions ‘primary responsibility for prevention and detection of research misconduct and for the inquiry, investigation, and adjudication of alleged research misconduct’.4 Thus, in the one ostensible OIG investigation of our experience, the OIG reported that gifts exchanged between the subject of an investigation and the investigating institution were none of its business. It also withheld all documents supporting its investigation, even after lawful federal records requests, citing ‘predecisional agency deliberations’. The NSF general counsel said its ‘hands are somewhat tied once the [OIG] decides – for whatever reason – not to pursue a matter involving research misconduct’. That’s bad policy.

As a community, we should investigate scientific misconduct scientifically. That means explaining the rationale behind our ‘experiments’, showing our data, providing supporting documents and declaring our conflicts of interest – as any author of peer-reviewed research is required to do. When secrecy is institutionalized, we can never be sure whether confidentiality has been used to protect individual privacy or abused to shield prejudgments and conflicts of interest from scrutiny. The investigation of science must be as transparent as science itself.