For those caught in the crossfire of war the reality is nasty, brutish and wasteful. The tragedy of Henry Moseley, who invented x-ray spectroscopy, is a cautionary tale.

Moseley’s father (and both of his grandfathers) had been a fellow of the Royal Society, but he died when Moseley was only four years old and the boy was raised by his mother. He was sent to Eton and graduated with distinction in both mathematics and classics, but his studies at the University of Oxford were distinctly underwhelming. 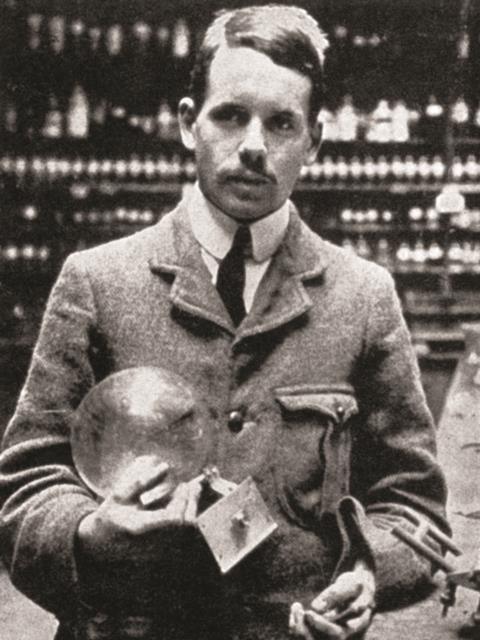 Moseley struck up a correspondence with Ernest Rutherford in Manchester, outlining his ideas, and was invited to join him. However, he found the work tedious and frustrating, and the technical support inadequate. He wrote to his mother in 1910 that ‘remaking the apparatus took a long time as the laboratory assistant spent his time mending Rutherford’s motorcar’.

It was during this time that his colleagues Hans Geiger and Ernest Marsden conducted the alpha-particle scattering experiment that led to planetary model of the atom: a tiny nucleus with orbiting electrons. It also allowed an estimate of the charge on the nucleus. The following year, in 1912, Max von Laue and colleagues observed the diffraction of x-rays through crystals of copper sulfate. Moseley was galvanised and wrote to his mother saying that he was building x-ray equipment, working with Charles Galton Darwin.

Darwin was in awe of his colleague. ‘Working with Moseley was a most impressive experience. He was without exception the hardest worker I have ever met. He had two principles in his work. The first was that when one starts to set up an experiment one must not stop for anything until it is set up. The second was that when one starts the experiment itself one must not stop till it is finished.’ After reproducing Laue’s results, Moseley gave a talk in November 1912, interpreting the result in terms of interference of waves diffracted through the crystal. Little over a week later his Cambridge contemporary William Lawrence Bragg announced his famous equation. His daring guess would soon allow him, and his father, to determine the structures of simple ionic solids.

But Moseley felt that understanding x-rays was more important. He spent endless hours building and modifying vacuum tubes and trying to record spectra of the x-rays produced by a platinum target. The x-rays were passed through a narrow slit and then bounced off a 6cm2 crystal of rock salt or sodium ferricyanide sitting on a turntable inside the chamber. The intensity of the deflected x-rays was then recorded using a helium-filled ionisation chamber. He became convinced that the spectrum was ‘white’ and that intensity was similar across the whole range of wavelengths. A few months later, William Henry Bragg (William Lawrence’s father) pointed out that platinum had a more complex spectrum, with characteristic ‘rays’ that Moseley had missed.

Into this heady mix came Neils Bohr’s mathematical model of the hydrogen atom, which accounted for the spectral lines of hydrogen in terms of the electrostatic attraction of the positive nucleus and the electrons. The critical parameter was the nuclear charge.

The paper set Moseley thinking. He surmised that a survey of the bright x-ray lines might give clues to the nuclear charge, and set out to measure their wavelengths since surely there must be x-ray analogues of what others had observed in the visible spectrum. Finding that teaching was too much of a distraction, he resigned his position and got a fellowship that allowed him to work full time.

He set up a vacuum tube with targets mounted on a kind of railway track. Two high vacuum stopcocks allowed him to wind a string to move the targets into position without breaking the vacuum that was generated using a Gaede rotary mercury pump and a liquid air-cooled charcoal trap. The x-rays then passed through a fine platinum slit, and then bounced off the same flat crystal, for which the lattice constant was now known. Moseley could record the 3rd order reflection of the x-ray on a photographic plate as a thin line. The geometry was so simple that he could measure angles to within a tenth of a degree. When plotted, the wavelengths sat in a straight line that allowed him to deduce the nuclear charge.

Moseley moved back to Oxford to complete the work. In a few months of scrounging, he had recorded the spectra of some 38 elements. These included the then-mysterious rare earth elements, of which he established the order and the gap at element 61. It was clear that nuclear charge trumped mass, and the order Mendeleev had established now had a physical basis. X-ray spectroscopy was born.

Moseley travelled to Australia to present his work, but when the first world war erupted he rushed back and enlisted in the army, patriotically asking to see active service. He was part of the Allied expeditionary force that landed at Gallipoli, Turkey, and, in June 1915, he was shot through the head. His genius had been extinguished at age 28.