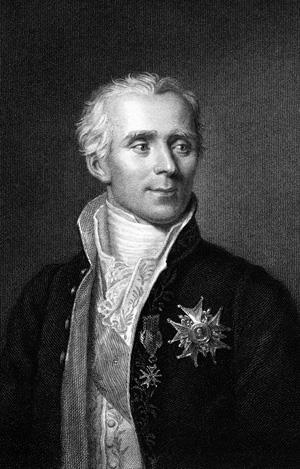 In 1969, Laurence Peter and Raymond Hull wrote The Peter principle. At its heart was the idea that when individuals are promoted for being good at their job, it is only a matter of time before they rise beyond what they can do well – they reach their level of incompetence. While tongue-in-cheek, the idea has a grain of truth and it is salutary to remember that no one is immune.

Pierre-Simon Laplace was born in Beaumont-en-Auge, France, not far from the Channel coast. He studied theology in Caen, where he demonstrated such prodigious mathematical talent one of his teachers, Pierre Le Canu, wrote to the mathematician Jean d’Alembert, one of the co-editors, with Diderot, of the Encyclopédie, recommending him. In Paris, the sceptical d’Alembert was soon so impressed with Laplace that he has him appointed professor at the École Militaire in Paris, where students included a young Napoleon Boneparte. Supremely confident, Laplace dreamed of election to the Academy of Sciences, but was passed over repeatedly by older and, he thought, inferior men. Eventually Laplace was elected to the French academy at age 27.

Much of Laplace’s work built on Newton’s laws of motion and gravity. In one of the most important of these ‘memoirs’ Laplace explored the behaviour of a particle attracted by a spherical object. He introduced his now eponymous differential equation to describe the potential surrounding the sphere. Although a mathematical triumph, Laplace failed to acknowledge the ideas of Adrien-Marie Legendre and Joseph-Louis Lagrange, both of whom felt rather aggrieved. It would not be the last time Laplace would fail to give due credit; to his contemporaries he was both vain and selfish.

As he wrote a textbook of celestial mechanics, Laplace gradually developed the idea of gravity as a universal, instantaneous interaction that affected every particle in the universe. It led him to develop (again, based on prior work of others) the idea that the newly discovered nebulae in space were the precursors of stars.

But there was also the problem of heat. Heat was the most intractable of scientific questions, considered to be part of chemistry because it was most spectacularly manifest in the process of combustion. The common view was that heat was the release of phlogiston, a substance that different materials contained to different extents. But the weight changes that accompanied combustion made no sense. The fact that metals became heavier when burned suggested that phlogiston, whatever it was, must have negative mass; only the most careful experiments at the time showed that in a closed system there was no change in mass. As Laplace’s great chemical contemporary Antoine Lavoisier would put it: ‘Matter is neither created nor destroyed.’ So what was heat? Could it be measured?

In Scotland, Joseph Black and his colleague William Irvine had already begun to measure specific heat – the amount of heat required to change the temperature of various materials. Black made the curious observation that heat was required to melt substances even though there was no accompanying change in temperature. This latent heat deepened the mystery further, but Black suggested that the amount of ice melted might be used to as a tool to measure heat. 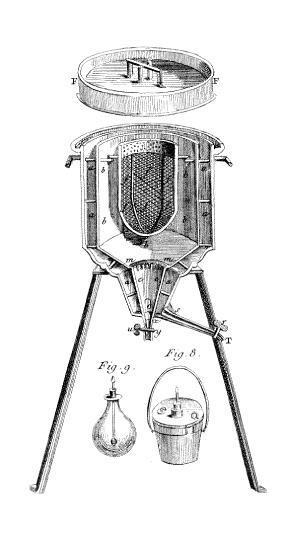 In Paris, Lavoisier was unaware of these experiments while he was working on combustion. Laplace first met him after a public demonstration of Joseph Priestley’s experiments with ‘dephlogisticated air’, which Lavoisier had identified as the element oxygen. The pair immediately struck up a friendship and began working together in Lavoisier’s private home laboratory. When the Scottish work was reported in France in 1780, Laplace suggested using Black’s ice idea.

He quickly designed a ‘machine’ with a sample chamber surrounded by ice. Heat from the chamber melted the ice, which then dripped through a funnel. A second jacket of ice provided insulation. The duo were able to measure the heats of combustion of sugar, sulfur and phosphorus by weighing the melted water.

Animal experiments followed. Guinea pigs were left in the machine for several hours to melt the ice, then were transferred to a bell jar – via immersion in a mercury bath – where the carbon dioxide of respiration could be quantified. The equivalence of ‘animal heat’ and chemistry was established: life was just souped-up combustion. Only later would Lavoisier invent the word ‘calorimètre’, apologising for his mixing of Latin and Greek roots.

When the French Revolution came, Lavoisier, who was a Royal tax agent, was guillotined. Laplace fled to the suburbs and then declared allegiance to the régime, for whom he calculated cannon trajectories. When Napoleon led his coup d’état, Laplace cannily sent him a copy of his Mécanique céleste. Impressed by his old teacher and wanting to place science at the heart of his administration, Napoleon made Laplace his Minister of the Interior.

Laplace lasted just six weeks in the job. Napoleon noted that he ‘brought his idea of infinitesimals into public administration’. In short, he was a micromanager – the classic coping strategy of the overwhelmed bureaucrat. For all his brilliance, even Laplace could not escape the Peter principle.

This is dedicated to the memory of Mike Ewing (1948–2016) a thermodynamicist who defied Peter.