An unexpected addition that revealed a new class of reactions

Emil Fischer – that titan of organic chemistry and nailed-on favourite for the most appearances in a column about named reactions – was a man feared by his students. In the late 19th century, Fischer directed the teaching laboratories at Friedrich Wilhelms University in Berlin. In the course of one daily inspection in the winter of 1896, he descended upon a nervous undergraduate. 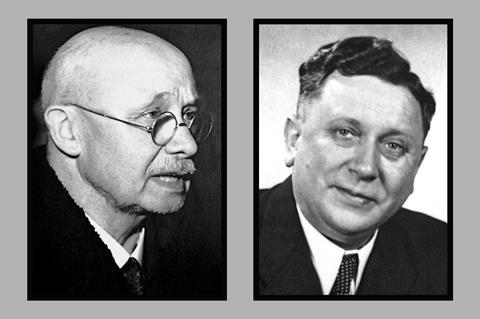 Usually known for his violent temper and critical judgement, Fischer was smiling. Perhaps he had seen something of the future in this young man. The student was confused by the turn of events and unable to answer questions related to the iron–aluminium separation in hand, but was not severely reprimanded. Given the advice that he should carry out experimental work only after careful study of its theoretical foundations in future, the 20-year-old Otto Diels would not forget his lesson.1

Instead of adding its acidic C—H bond across the N=N bond of deithyl azodicarboxylate, cyclopentadiene forms a new six-membered ring

Diels would conduct his doctoral studies under Fischer and remain in Berlin as assistant to his mentor. They became close friends and Diels was promoted to professor at Fischer’s suggestion in 1906. The younger man relished the opportunity to finally pursue his own ideas, and made an early impact in the same year – as the first to prepare and identify carbon suboxide (C3O2) whose existence had been proposed in 1873. Another interesting new compound, diethyl azodicarboxylate (EtO2CN=NCO2Et), had been recently prepared from hydrazine (H2N–NH2) by Theodor Curtius2 – who had discovered hydrazine itself in 1887. The N=N bond of diethyl azodicarboxylate is electron poor, and Diels recognised the possibility of adding a protic nucleophile across it. Aiming to expand his research interests, he began to study addition reactions of azodicarboxylates with amines, phenols and aliphatic alcohols.

In the early 20th century, it was empirically known that cyclopentadiene is an unusually acidic hydrocarbon (only later would Erich Hückel’s quantum mechanical description of aromaticity reveal that the acidity is associated with the stable aromatic anion resulting from deprotonation). Reasonably then, Diels tried adding it to diethyl azodicarboxylate.3 The product was very different to what he expected, he discovered that the N=N double bond had added across the conjugated diene. Diels carefully documented the reactivity of this adduct to rule out other addition mechanisms, and described the cyclic redistribution of the six π-electrons during the reaction (figure 1).

Diels first described the cyclic flow of electrons in the reaction between cyclopentadiene and diethyl azodicarboxylate.

Furthermore, Diels recognised that his reaction had precedent: isoprene fulfils the role of the conjugated diene in a reaction with 1,4-benzoquinone reported by Hans von Euler and Karl Josephson4 (figure 2). Diels also went on to correct the structural misassignment made in an earlier report of the reaction between cyclopentadiene and 1,4-benzoquinone.5

Heinrich Wieland had speculated that cyclopentadiene dimerises by the same mechanism,6 and it became clear that the analogous dimerisation of isoprene reported by Nobel laureate Otto Wallach in 1885 was another early example.7 A case was building that these might be examples of a general reaction type. Recognising that in each, the 2π electron component bears electron-withdrawing substituents, Diels set out to combine other electron-poor alkenes with cyclopentadiene, handing the problem to a junior colleague who had recently completed doctoral studies under his supervision8 – Kurt Alder.

Alder had grown up in Königshütte (Chorzów in modern Poland) and proved an able and driven researcher. Meeting his first task head-on, Alder demonstrated that 1,4-naphthoquinone, maleic anhydride and acrolein each participate as the 2π component (dienophile) in the addition reaction. He partnered these with cyclopentadiene, 1,3-butadiene, 1,3-cyclohexadiene and α-phellandrene in the first systematic study of the cyclisation which would henceforth be known as Diels–Alder reaction.9

The Diels–Alder reaction has united a huge variety of molecules, including some highly complex examples like this intermediate in Stephen Martin’s synthesis of reserpine (centre)

Alder became a lecturer in Kiel in 1930. In the following years he came under pressure to contribute to the NS-Dozentenbund (Nazi league of lecturers) as a demonstration of support for the Third Reich, but resisted doing so and was not a member of the Nazi party. His efforts to obtain a professorship were duly thwarted. Furthermore, disagreement arose between Alder and Diels during the 1930s over their respective claims to the reaction development. Sadly, their relationship deteriorated greatly. As Alder fought to secure a post at the University of Cologne, he struggled to overcome suspicions about his political reliability that were reinforced by a negative report of his character from Diels.10  Bound by shared experience, they had grown apart and were no longer able to communicate. It was an unhappy situation.

Eventually securing the Cologne chair in 1940, Alder devoted his career to understanding the mechanistic and stereochemical foundations of the Diels–Alder reaction. By way of his estranged mentor, Alder’s approach was a tribute to the brilliance of Fischer. Diels and Alder were finally reconciled at the Nobel prize ceremony in 1950.