Dylan Stiles worships at the altar of NMR

Dylan Stiles worships at the altar of NMR

As a master chef organic chemist, I split my time between cooking up new molecules, and trying to figure out what I’ve just synthesised. I’ve got a battery of spectroscopic tools to help with the latter, but my first choice is always NMR - nuclear magnetic resonance. For structural analysis of small molecules, NMR spectroscopy can’t be beat. It gives answers to all of my most fundamental questions in life: did that cross metathesis give the cis or trans olefin isomer? What kind of diastereoselectivity did I get in my Mukaiyama aldol reaction? Only NMR can tell. 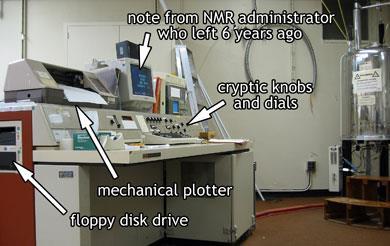 It’s no surprise that NMR has attained an uncommon reverence among spectroscopy enthusiasts. Every spec facility I’ve ever visited has a NMR jockey watching over the health of his instruments with borderline obsession. NMR buffs constantly dream up new pulse sequences to poke and prod at atoms, making their nuclei dance. I strongly suspect they have a secret society, where they gather to think up ridiculous names for their experiments. Raise your hand if you’ve ever run an Inadequate (Incredible natural abundance double quantum transfer experiment) NMR.

But I have nothing but the highest respect for NMR aficionados and I completely understand their infatuation. To me, the NMR lab has all the sanctity of a church. It’s tucked away in the basement, insulated from the vibrations and radio interference of the outside world. You enter the room and immediately sense you’re in the presence of a higher power. Windowless and dim, it’s a quiet place to reflect, noiseless but for the angelic hum of fans and fluorescent lights.

NMR paraphernalia such as pacemaker warnings and five gauss magnetic perimeter chains attest to the unfelt forces permeating the air. To approach the altar and present a glass tube offering, you must prepare. Remove your watch, keys, and credit cards. The magnet is benevolent but demands respect. You ascend the ladder and insert your sample. It floats on a cloud of nitrogen before descending into the belly of the machine.

On rare occasions the oracle will inform you that you’ve accomplished something wonderful. A new peak in the spectrum with the right chemical shift and coupling constant means you have successfully made a critical compound. The realisation is sudden and dramatic. I was recently graced with one of these cathartic moments, and I’m not ashamed to say I went and gave the NMR a big hug. It was very late at night.

The luxury of modern NMR, with its elaborate data processing, is easy to take for granted. Ask an old timer about the days of continuous wave machines, and you’ll get an earful of war stories about camping out next to the instrument during a long acquisition, mechanically adjusting the shims with wrenches to tune the magnetic field.

I love all of our department’s NMR machines, but there’s one instrument that it pains me to look at: the ’old 400’, a Varian XL-400 that sits in a corner, unused and lonely. I’m sure that in its heyday it was state of the art. After all, 400 MHz is still nothing to sneer at. But its console is right out of a scene from Das Boot, with a panel of esoteric dials, dip switches and meters, the purposes of which are not immediately clear.

The keyboard is one of those old timey ones that makes loud clickety noises. Instead of a laser printer it has a mechanical plotter with pens, which takes about 10 minutes to draw your NMR spectrum on a massive 11 x 14 inch scroll. Sometimes the plotter sticks and you have to smack it hard to make it go again. One novelty of this machine is the speaker on top of the monitor. If you turn the volume on, it will actually play the sound of decaying pulses while it’s acquiring a spectrum, making a very pleasant sonar ’ping’ that repeats every four seconds. Blow forward tanks, dive dive dive.

But it’s a dinosaur that nobody uses, and it makes me sad. Like a senior citizen who was quite the star in his youth, and perhaps could still make valuable contributions, but instead gets ignored, kept alive with liquid helium.